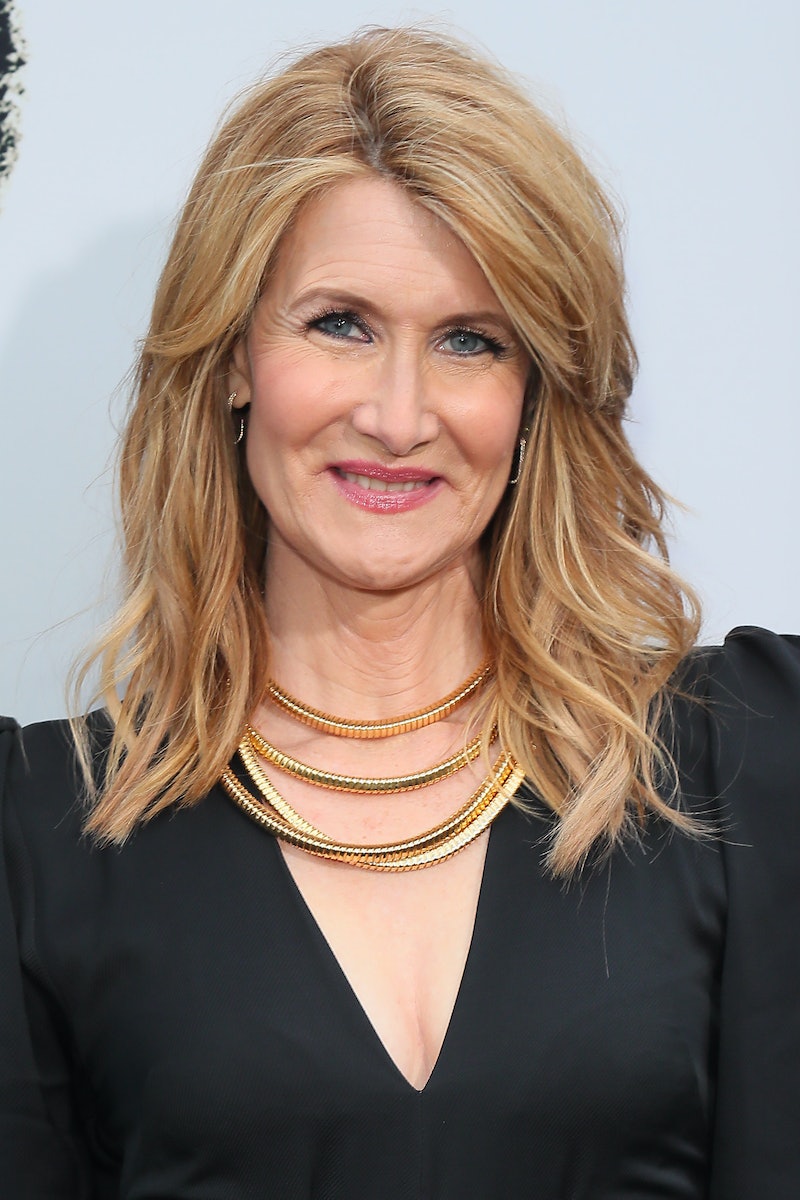 No need to wonder any longer: Renata is definitely a fan of Megan Rapinoe. Or at least, the iconic actor who plays her unabashedly is. Laura Dern finally met Megan Rapinoe and it was a mash-up of two major female-led squads. Dern represented the dishy HBO series Big Little Lies, while Rapinoe scored the winning World Cup goal for the U.S. Women's soccer team. It was a power pairing fans didn't know they needed, that is until Dern declared her support for the team earlier this month.

On the heels of the USWNT's latest victory, Dern was one of many celebrities to voice her excitement over the win. She posted a photo of the team in the moments after receiving their trophy, captioning it, "I'm crying. They did it again!! So happy my flight was delayed (that's a first!). We watched the last game in our delay. Sooo great! #uswomenssoccer #worldcup."

As it turns out, the stars aligned for these two superstars to meet and craft a golden Instagram post all at the same time. Both the Oscar-nominated actor and star athlete were guests on the Monday, July 15 episode of Late Night with Seth Meyers. So, the show's backstage provided the backdrop for this iconic meet-up.

Dern captioned a black-and-white snapshot of the two with a reference to her on-screen counterpart's daughter, "She is coming to Amabella's next birthday party! Simply a privilege to meet an extraordinary athlete, hero, and fearless true voice! #MeganRapinoe #uswnt."

But if you think this photo op came courtesy of a random late-night lineup and one post from Dern, you're wrong. Over the last month, there's actually been quite a bit of crossover talk for Dern and Rapinoe. Shortly after both the World Cup finals and a BLL episode which involved Renata's disco takeover of Amabella's birthday party, Keep It cohost Louis Virtel wrote on Twitter, "I hope the women's national soccer team accepts their invitation to Renata's disco party from Big Little Lies."

Dern provided a spot-on Renata response, tweeting, "I'm waiting for their RSVP. Amabella will love this. I started her playing at age 3." Witherspoon chimed in, adding, "Hey @USWNT ! Want to come to Monterey? We throw really great parties," alongside the laughing/crying emoji.

By the night of Dern's late show appearance on the same night as Rapinoe's, it was a full-on thing. Dern tweeted ahead of her guest spot, "Looking forward to seeing you, Seth. But um also...MEGAN RAPINOE!!!!! Woweee." Woweee indeed, Dern.

Alas, Dern and Rapinoe's meeting was actually written in the stars courtesy of Seth Meyers. Plus, understanding the Twitter context ahead of this exchange makes it that much more legendary. However, several questions about their convo remain. Does Rapinoe marathon BLL alongside longtime girlfriend Sue Bird? Was Dern as invested as the rest of the world during Rapinoe's mid-tournament injury? A Twitter recap is direly needed.

But until that glorious day, fans of both Dern and Rapinoe can find peace in the fact that these two stars of the field and film crossed paths.