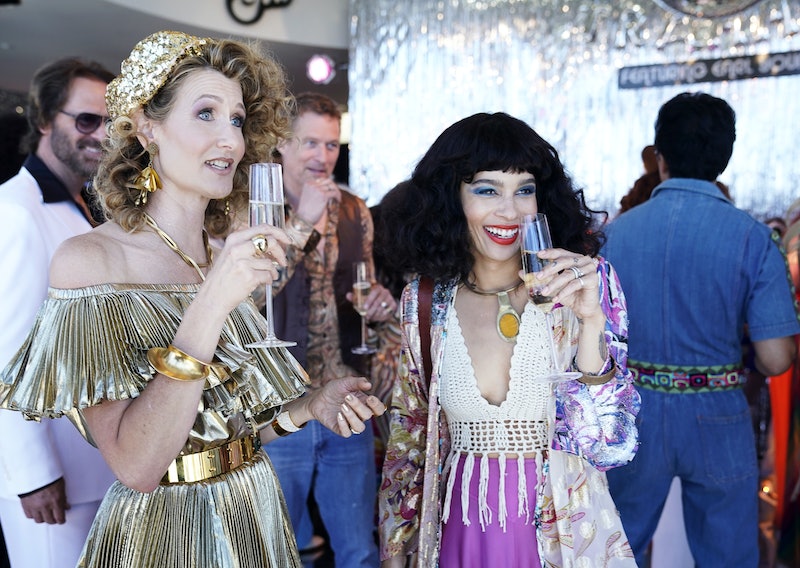 Anyone perusing the list of 2019 Emmy nominees, fans might have noticed that Big Little Lies is nowhere to be found. Well, don't worry no one is stopping Renata Klein from not not being rich in nominations again. The reason why Big Little Lies isn't nominated for the 2019 Emmys is because the series was ineligible this year. And it all has to do with BLL Season 2's premiere date.

Unfortunately, the cut off for Emmy eligibility this year was May 31, according to CNN. The Monterey five didn't return for its second season until a week later on June 9. That's why the show and its cast weren't nominated for Best Drama alongside this year's Emmy nominees Better Call Saul, Bodyguard, Game of Thrones, Killing Eve, Ozark, Pose, Succession, and This Is Us.

Of course, that didn't stop fans from expressing their disappointment over BLL's lack of noms. Some were screaming, while others didn't see the point of even watching the nomination announcement if BLL wasn't eligible. But honestly, does anyone really want to go up against Game Of Thrones in the show's final Emmy year? No, I didn't think so.

What this does mean is that next year, Big Little Lies can be nominated for the 2020 Emmys, alongside shows like Stranger Things 3 andThe Handmaid's Tale Season 3, both of which also missed this year's cut-off with their new seasons.

And who won't be listening for Meryl Streep's scream once she inevitably gets nominated for Best Supporting Actress? Seriously, she's Meryl freakin' Streep, she's definitely on track to earn her fifth Emmy nomination.

Very early predictions from GoldDerby, also think Zoë Kravitz could earn an Emmy nomination in 2020, which would be her first for the show. Last time around, she was the only one of the leads to not be nominated. This year, Kravitz's Bonnie has taken on a bigger role, which might lead to some well-deserved recognition. Of course, Reese Witherspoon's ice cream toss could have earned her an automatic Emmy, but, unfortunately, HBO cut that scene so we'll never know.

That ceremony also gave fans one of the best speeches of the night from Witherspoon, which shouted out other female creatives. "It’s been an incredible year for women in television, can I just say? Bringing women to the front of their own stories and making them the hero of their own stories," she said, "and thank you for that opportunity and for audiences to wrap their arms around us."

Next year, might be the last time fans get to see the cast together for award's season, since HBO president Casey Bloys has already said it's unlikely Big Little Lies will return for Season 3. "I love this group of people — I would do anything with them," Bloys told TVLine last week. "But the reality is, they are some of the busiest actresses working in Hollywood."

Don't worry, though, there's always next year's Golden Globes — that awards' eligibility includes shows which premiered between Jan. 1, 2019 to Dec. 31, 2019 — to see these ladies get together again. Let's hope it goes better than Amabella's disco birthday party.