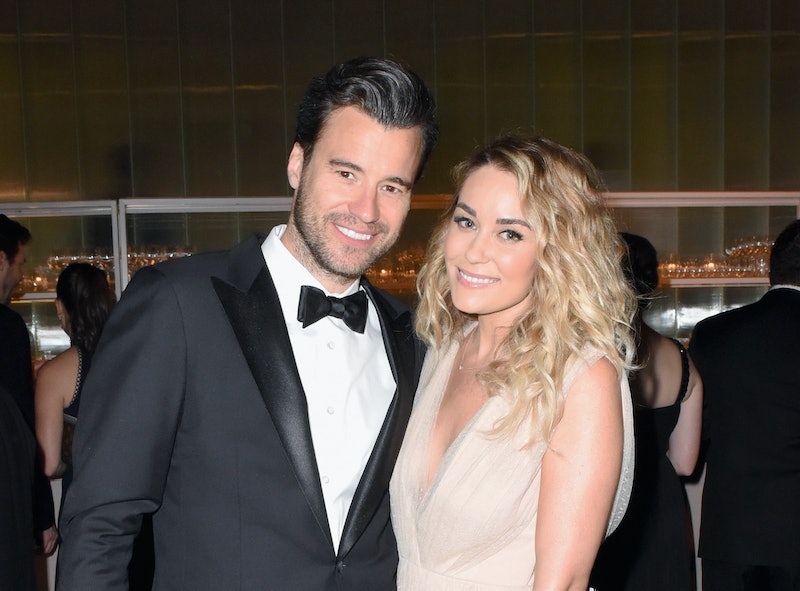 Leave it to Lauren Conrad to announce her second child's arrival via an aesthetically appealing Instagram. On Wednesday, Oct. 9, Conrad shared her new baby's name along with a watercolor painting of her now-family of four (or family of six if you count the two pups also featured). The Laguna Beach alum kept it simple, writing, "Our sweet baby boy, Charlie Wolf Tell, has arrived!"

Since she's known for her carefully curated social media content, it's not all that surprising LC decided to reveal her big baby news with a snapshot that perfectly matches the pastel pink vibe of her page as a whole. After all, her Instagram account looks like a straight-up Pinterest page and she has an entire lifestyle website dedicated to sharing recipes, home decor tips, and more — it's very much her brand. Even Conrad's initial pregnancy announcement back in early April had a similarly pretty aesthetic, featuring a floral dress and artsy, off-center angle.

Charlie Wolf Tell is Conrad's second child with husband William Tell. The pair, who got married in 2014, welcomed their first son, Liam James, back in July 2017. Similarly, Conrad went the crafty route for that birth announcement, sharing a photo of a needlepoint featuring a cartoon of the family that read, "And then there were 5." (Yes, the dogs were counted in the equation that time, too.)

Back in August, Conrad opened up about how pregnancy was different this time around for a pretty obvious reason. "I’m definitely more tired. Pregnancy is much more difficult when you have a 2-year-old running around," she told People. Adding to an already hectic time, Liam recently started nursery school and Conrad joked on Instagram that she was "too pregnant to handle" it. But even with her hands full and emotions running high, Conrad mentioned in that same People interview that she's making sure Liam has a "positive experience" as a big brother.

Even though Conrad pretty much grew up in the public eye — via back-to-back MTV reality series during her teen years and early 20s — that doesn't mean she's trying to force that lifestyle on her kids. When she was still pregnant with her first child in 2017, Conrad spoke about her plans to keep some details of her future children's lives out of the spotlight in an interview with Parents:

"I’m going to have to figure out how much of motherhood to share on social media. Obviously you want to protect your child in every way you can. At the same time, my brand is based on being accessible and sharing the milestones of my life... I’ll find a middle ground."

Conrad's latest baby announcement definitely fits in that "middle ground." Instead of sharing a pic of her newborn or overdoing it on details, she opted for a painting that also protects little Charlie's privacy. Chances are it's only a matter of time before fans get another perfectly planned peek at her parenting journey.