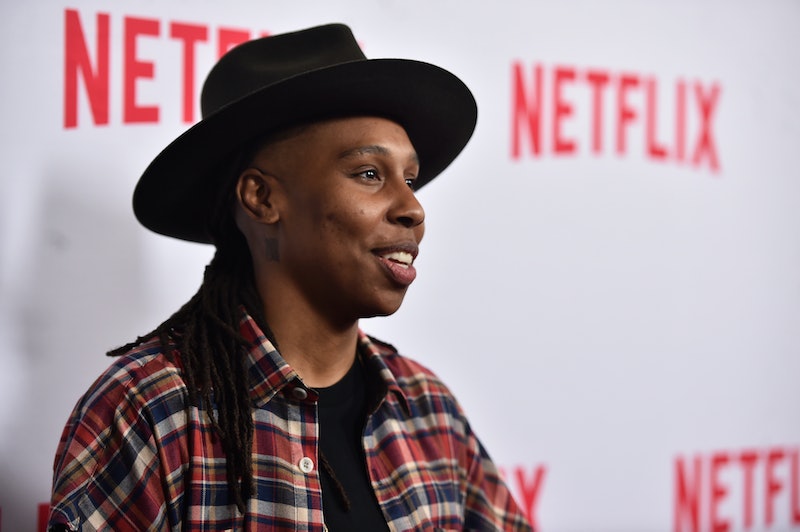 On the tail end of a history-making win during the 2017 Emmys, Lena Waithe is teaming up with Netflix's Dear White People again — but this time, in front of the camera. According to an Entertainment Weekly exclusive, Waithe's Dear White People character will remind you of your favorite reality television stars — hilariously adding to the ongoing conversation of how black people are negatively portrayed in the media.

The talented Waithe produced the 2014 movie phenomenon, in which the series is based on. So hearing that she's making a comeback will be thrilling for fans. Waithe will reportedly be playing the role of a overtly confident rapper by the name of P. Ninny, who's a cast member in the show's parodical show, entitled Trap-House Tricks. And by the looks of Waithe's character's wardrobe, she's going to be both entertaining and completely over-the-top.

The series' Trap-House Tricks is said to be a play off of VH1's hit Love & Hip Hop, and it will be another show that the Armstrong-Parker residents watch weekly in Season 2. In the Netflix series, the college students gathered together every week to indulge in a Scandal-esque show, entitled Defamation, and engaged in hilarious debates about the program's negative portrayal of black culture — a dialogue that black people have amongst each other all over social media in real life.

And it sounds as though Trap-House Tricks will serve the same purpose in Dear White People's second season that Defamation had within its first. Dear White People creator Justin Simien told Entertainment Weekly that Waithe's character is "Lena if Lena was a hot mess. It’s proto-Lena." He continued, saying:

"It’s [us] having fun and making our own commentary on the state of black people in television and in culture and how that affects people, particularly our protagonists."

P. Ninny is unlike any other character that Waithe has ever played, according to the multi-talent. And she thoroughly enjoyed letting that over-the-top side of her pseudo-persona out to play. Waithe added,

“What’s so funny about her is that she’s not aware of how she’s coming off to the world. But, she’s a lot of fun. I just got be like really silly and crazy, and say crazy stuff, because that’s what happens in that world.”

That world Waithe is referring to is black reality TV, and it has been highly criticized for its negative portrayal of black culture and its apparent reliance on negative racial stereotypes to gain ratings. The 2012 premiere of L&HH Atlanta garnered 3.6 million cable viewers, making VH1 history as one of its most rated premieres at the time. And during its Season 3 premiere, L&HH Atlanta's ratings rose to a staggering 5.6 million cable viewers. Though controversial, there's no doubt that the reality show has entertainment value — seeing as its been running successfully for the past five years.

It's no secret that poor ratings are a sure-fire way to getting any television show canceled. And the highly-rated VH1 show's main target audience seemingly being black people fuels the longstanding debate: Why are black people tuning into these programs, regardless of their entertainment factor, if they cast negatively upon black culture? And taking it a step further: If tuning into these programs is considered to be a form of self-care, why do black people find negative portrayals of other blacks to be so entertaining?

Some blame L&HH franchise creator Mona Scott-Young for the show's bitter-sweet successes, while others blame black people for the controversial program's wins. But either way, because numbers don't like, black reality television is arguably a culture-shifting sensation.

And for that reason, it's going to be exciting to see what role it will play in Dear White People's Season 2.