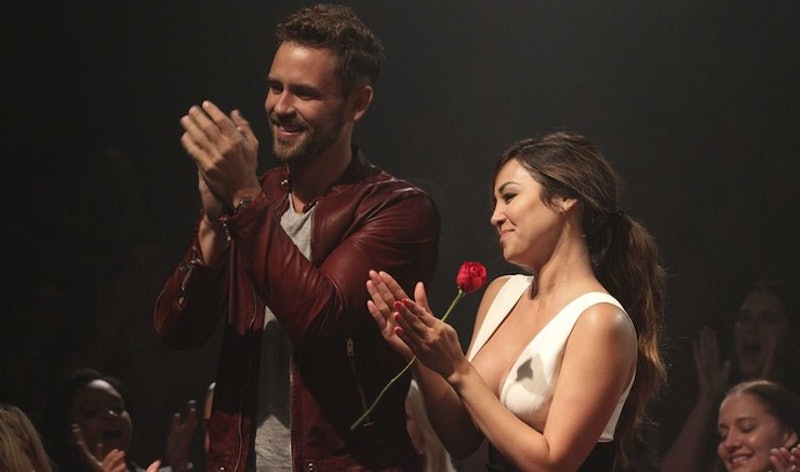 "Ugh, how could you watch that?" "This show is so shallow." "Aren't there better things to do with your time?" Insert the name of any reality series (The Bachelor, Keeping Up With The Kardashians, Real Housewives, Vanderpump Rules) into one of those sentences and you've got a scenario reality TV fans frequently face: having to withstand the judgement and shame attached to enjoying typically "lowbrow" entertainment. But guess what? Getting wrapped up in Nick Viall's love life or following Rob and Chyna's rollercoaster romance or escaping into the Kardashians' world doesn't mean I don't care about what's going on in the real world. And judging me for it doesn't make anyone else morally superior. In fact, reality TV can be exactly what we all need, especially in the politically tumultuous time we live in.

It's true, reality TV provides a much-needed escape from actual reality nowadays. Literally everybody could use a break — just an hour or two of mindless drama to forget about world events, if only temporarily. And I'm not alone in this belief. According to Dr. Pamela Rutledge, Director of the Media Psychology Research Center, if you're feeling stressed and consciously decide to sit on the couch to watch TV because you need a break, that's not bad. In fact, it's beneficial.

"When you're doing anything that is conscious in that way, it's a form of self-care," Rutledge tells me over the phone. "You've given yourself permission to check out for a little, to regroup, to do something that rejuvenates you."

I'm not saying that Bachelor in Paradise should replace your daily news scan, but rather that you should be able to consume more than one kind of media without feeling guilty about it. This shouldn't be a novel concept, but, apparently, it is.

It seems that people often forget there doesn't have to be depth in reality TV. These shows exist purely for entertainment value. They're meant to be lighthearted and hilariously dramatic — that's the whole point. Do you think anyone tunes into Real Housewives hoping for more than catchphrases, vacations, and parties? I sincerely doubt it.

"If you're watching [reality TV], it's like having a dessert," explains Robin Nabi, Media Effects & Health Communication Professor at U.C. Santa Barbara, in a phone interview. "Don't feel guilty, otherwise it really takes away from the experience. Same thing with television."

The dessert analogy is quite fitting; if you spend most of your time watching reality TV feeling guilty for doing so, it almost cancels out the relaxation aspect. If I'm marathoning The Simple Life on my couch, it's because I don't want to focus on anything other than Paris and Nicole's road trip antics. And that's perfectly OK.

Coincidentally, Rutledge gave a similar example by comparing reality TV to eating sweets. "If you sat down and just ate ice cream mindlessly until you passed out in a sugar coma, that wouldn't be good," she says. "But if you're going to have some and you're aware of it and you're enjoying it, then it's fine. It's recognizing the behavior and being conscious of what the purpose of them is for. Then they can be a nice escape."

And, sometimes, these "mindless" shows might actually open your mind in ways you never expected. On the Feb. 6 episode of The Bachelor, one contestant, Kristina, shared her immigration story with Nick. She told Nick about how coming to the U.S. helped her escape life as an orphan after she was kicked out of her own home by her mother. Her family didn't have enough food, and she once ate lipstick to survive. As Kristina poignantly put it, if she had stayed in Russia, her life would be in "black and white," but moving to America helped her live "in color." Given President Trump's stance on letting refugees into the U.S., immigration stories of those who've escaped terrible situations are more important to hear than ever.

Then there's Keeping Up With The Kardashians, which, though it, isn't exactly saving the world, but it does offer a realistic (and, OK, sometimes over-the-top) look at what it means to be a family. They're not perfect; they have their fights, their drama, their cry sessions. But it's a show centered around love, and one that spotlighted huge social issues when it showed Caitlyn Jenner coming out as transgender; Rob Kardashian battling depression, anxiety, and diabetes; and even the fact that Kylie Jenner has advocated against cyberbullying.

Even competition reality shows, such as The Voice or Extreme Home Makeover can be unexpectedly impactful. In fact, what you see on screen may inspire you IRL. "For those kinds of programs about transition or transformation, you might be inspired to achieve your own goal," Nabi explains. "It doesn't have to be about losing weight or about a home makeover, but just seeing that sort of transformation inspires you to think, 'You know, I really do want to sit down and write that novel.' Or 'I really do want to look for a new job.' So you think about what you can achieve in your own life."

Plus, there's another benefit of watching reality TV: the social aspect. Rutledge suggests that reality programming helps create comfortable talking points with strangers, much like discussing a sporting event at the water cooler. "It's a way of creating intimacy in a really comfortable way for everyone in the group. and you learn about people what they like and what they don't like in the context of these shows," she explains.

Meanwhile, Nabi highlights how you can get invested in the characters on reality TV shows and their lives, almost like they're friends of yours. "It can provide people an opportunity to feel like they are socially connected, if they expose themselves to the same program repeatedly over time," Nabi says. "You can see those characters — whether it be the Kardashians or it be on the home makeover shows... Which everyone suggests that social support, feeling more connected socially, benefits our well-being."

Ultimately, if a few hours of television help you breathe a sigh of relief, that's not a bad thing at all. You can be the biggest advocate for political change and still plop down in front of the TV for an America's Next Top Model marathon. There's nothing wrong with recharging, and reality TV is my tried-and-true method. So, next time you judge someone for watching Real Housewives, check yourself. Everyone has a right to a little self-care.