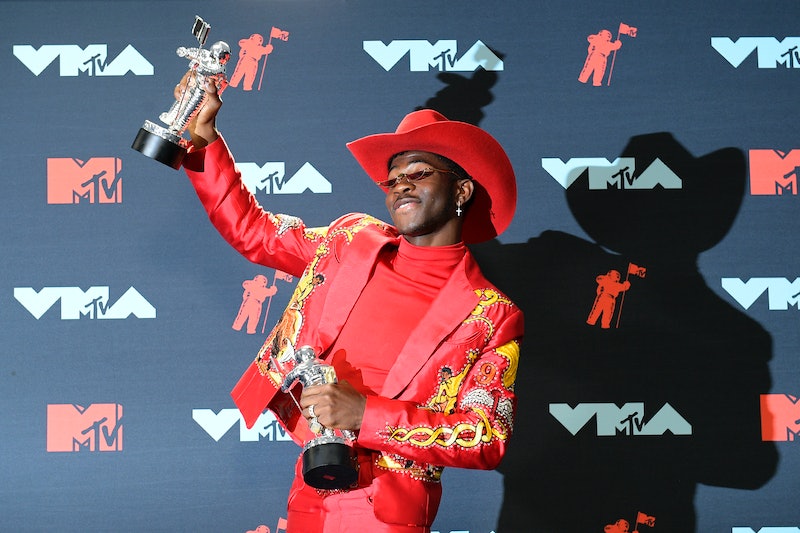 Rapper and acceptance speech prop genius Lil Nas X responded to a question about his dating life on the Monday, Sept. 23 episode of The Ellen DeGeneres Show by sort of answering, but also sort of not answering. It is a tremendous response to the "Are you dating anyone?" question for when you don't want to give an answer/don't have an answer/aren't ready to give an answer. Put it in your back pocket for the holiday season.

After a Billy Ray Cyrus impersonator jumped out of the crate wedged between their seats (if a person does not pop out of a box and scare the daylights out of the day’s guest, did an episode of The Ellen DeGeneres Show actually happen?), DeGeneres asked Lil Nas X about his decision to come out. He said he believed he should’ve done it earlier, but he was worried about how his friends and family might respond to his coming out. But after his breakout single conquered the Billboard Hot 100, he felt ready. He explained, “I’m on a new level, so it doesn’t really matter, I guess. And also, just how it will be good for the young'uns who are listening to me right now, who are going to have to go through stuff like this in the future, know it’s all right, I guess.”

DeGeneres applauded his response, and then asked if he is in a relationship with anyone at the moment. And Lil Nas X replied, “Somewhat, somewhat."

Lil Nas X kept it vague when talking about whatever his current relationship status may be, and what a millennial move it was. And what a Gen Z move it was, too. The two generations are not one in the same, but there sure is some overlap with regard to the way they handle the wild world of dating. Millennials have been doing the easy breezy relationship thing for years, and Gen Zers are no strangers to keeping things casual. Both appreciate a chill relationship situation (and a chill non-relationship situation, for that matter), and both have redefined the way people talk about and approach dating.

Long story short, Lil Nas X's response is a label-less label, and all the best to him and his "Somewhat, somewhat."

What a year it has been for Lil Nas X. In April, he released a remix of "Old Town Road" featuring Billy Ray Cyrus that promptly ended up on the "Song of Summer 2019" shortlist. It broke multiple chart records, including the record for the most weeks at the top of the Billboard Hot 100. It is in the running for the Musical Event of the Year award at the 2019 Country Music Association Awards, making Lil Nas X the first out gay man to receive a nomination at the award show. "Old Town Road" was up for several categories at the 2019 MTV Video Music Awards, and Lil Nas X took home a Moon Person for Song of the Year and for Best Direction. In honor of his second single, "Panini," he made paninis with Gordon Ramsay.

And now, he is on The Ellen DeGeneres Show answering questions about his dating life. You can never go wrong with a casual "Somewhat, somewhat," especially when you're having a year as fantastic as Lil Nas X's.