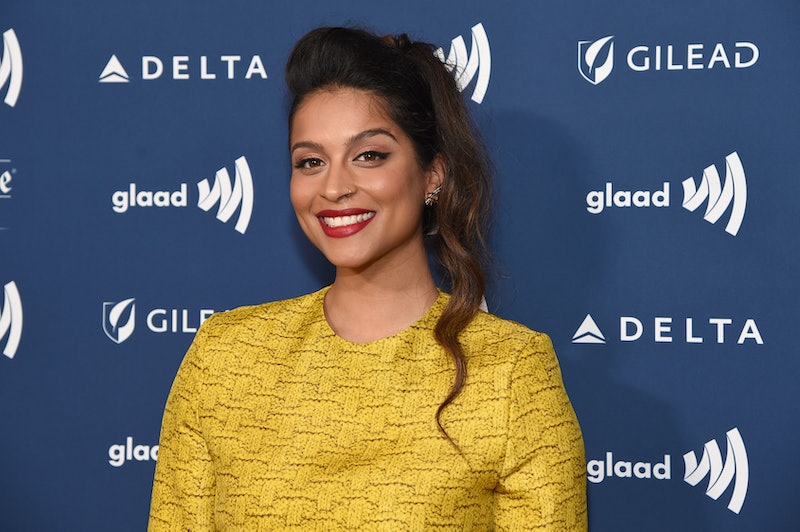 YouTube star, comedian, and now host Lilly Singh announced her talk show's premiere date in a video on Thursday, July 25 that shows off her quirky sense of humor. Singh, who is better known to her fans as ||Superwoman||, shared that A Little Late With Lilly Singh will premiere Sept. 16 at 1:35 a.m. on NBC. But the comedian didn't simply announce the date; instead, she did the talk show equivalent of a gender reveal.

Singh gathered several of her friends together, and had them bust open a tiny piñata, put baked goods into the oven, and wash shaving cream off a picture frame in order to reveal the date of her show's premiere. She even titled the video "I'm expecting...," but don't worry, the How to be a Bawse author apologized for the "clickbait" title at the end. In true Singh fashion, her video was all about bringing the satire as she poked fun at what's quickly become the modern day tradition of elaborate baby gender reveals.

And hey, having a new talk show is a life event that's right up there with having a baby, so the star has every right to celebrate with all of the tongue-in-cheek videos she wants. As Singh told fans in her YouTube announcement, she's put a lot of work into A Little Late With Lilly Singh already, and it's clear that she can't wait to share her show baby with the world. "Sept. 16th ya'll! OK, I am so excited and so nervous at the same time," she said. "I just want to say I'm putting my all into the show. I'm so grateful to be in this position. I know what a big deal this is. I know what a historic deal this is."

Singh isn't kidding about her new show being historic. When A Little Late With Lilly Singh premieres in September, she'll become the only woman hosting a late night show on network TV, and the only woman of color hosting a late night show on traditional TV. The YouTube sensation isn't the first woman or woman of color to breakthrough on a major network (Cynthia Garrett hosted NBC's Later in 1999, and Wanda Sykes had a self-titled Fox show in 2009), but the genre has long been dominated by straight white men, which makes it all the more exciting to see Singh bring her point of view to late night TV.

Fans have been looking forward to the new talk show since Singh announced that she'd be taking over Carson Daly's time slot on The Tonight Show Starring Jimmy Fallon in March. It seems that since then, she's been hard at work on getting her show off the ground, and with the premiere fast-approaching a few new details have been revealed.

On Thursday, The Hollywood Reporter revealed exclusively that the show will have a gender-balanced writers room with a staff that includes a number of late night veterans including: Sean O'Connor (The Late Late Show With James Corden), Marina Cockenberg (The Tonight Show Starring Jimmy Fallon), and Sergio Serna (The Late Late Show). In addition to hosting, Singh is also an executive producer on the series. She told THR, "I'm literally counting down the days until the premiere. It's 53. I'm thrilled to be collaborating with this all-star team of writers as we work to bring a new, authentic perspective to late night."

As Singh's decidedly nontraditional premiere date announcement illustrates, the YouTube star is ready to shake up the late night game with her unique brand of humor — and that's reason enough to mark your calendar for Sept. 16.