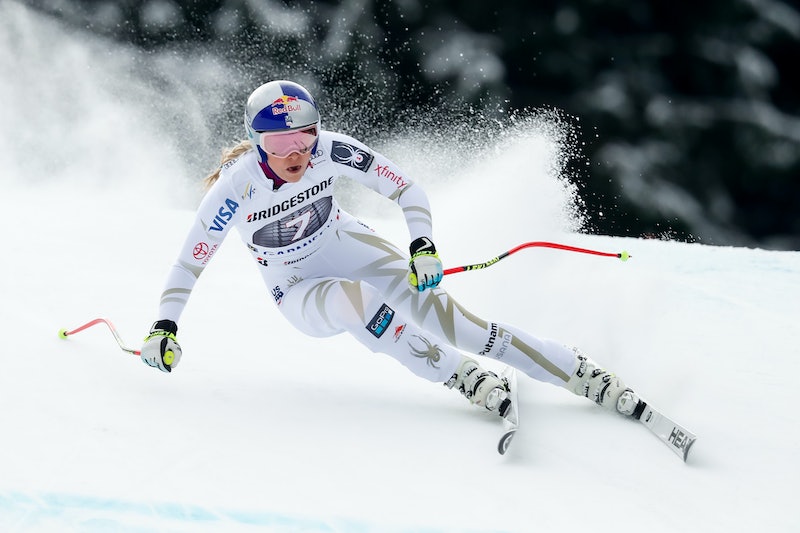 Despite flight delays, Lindsey Vonn made it to the 2018 PyeongChang Olympics and joined Team USA for the opening ceremony. Now that she's in South Korea, you'll want to keep track of Lindsey Vonn's skiing event times at the 2018 Olympics so you can watch all her races. The PyeongChang Games mark a major comeback for her as she was unable to compete during the 2014 Sochi Olympics. And, as she is one of the most famous U.S. Olympians in the Winter Games, all of America will be rooting for her. But beyond her being a sports celebrity, you will want to watch Vonn ski at the Olympics due to her athletic prowess and impressive speed.

Before the 2018 Winter Games, she had competed in the 2002 Salt Lake City Olympics, the 2006 Turin Olympics, and the 2010 Vancouver Olympics. In Vancouver, she won the bronze medal for the super-G event and the gold for the downhill event. But after her gold-winning games in Canada, Vonn was forced to miss out on the 2014 Olympic Games in Russia due to a knee injury. But that didn't end the 33-year-old alpine skier's career, as she makes her triumphant return at the 2018 Olympics.

However, that doesn't mean she won't be affected by her injuries. In an Instagram story, she noted that she left the opening ceremony early due to her knee. And while she was originally slated to compete in the giant slalom, the Los Angeles Times reported that Vonn announced on Feb. 9 that she will be skipping that race also because of her knee. "I want to end on a high note," she said. "I really want to put an exclamation point on my career."

So while NBC has already put together a schedule of all of Vonn's events at the 2018 Olympics, you'll want to check the news to see if anything else changes because of her injuries. But, on the bright side, all of the events she is scheduled to compete in are at reasonable times — even with NBC airing all of the Olympic Games without a tape delay. So whether you watch using cable on your television or you live stream the events through NBCOlympics.com or the NBC Sports app, here's when to catch Vonn in action.*

*All times are ET.

Fans will have to wait a week from the opening ceremony to watch Vonn's first event — the super-G. The PyeongChang Olympics website notes that, like the slalom and giant slalom, this is a technical race where skiers must zigzag through gates. Yet speed is also a major factor, especially since the super-G slope is steeper than the slopes in the other slalom races. (The gates are also farther apart.) It's called "super" for a reason since it's an intense event with only one chance to win gold.

Downhill is the event that Vonn won the gold for in 2010, so you're going to want to tune in for this one. The downhill race is all about speed with the PyeongChang Olympics page noting that athletes can travel from 55 mph to over 85 mph. (ESPN reported that during the first downhill race of the 2017-2018 skiing season, Vonn wiped out when she was traveling at 64.8 mph.) Athletes must participate in the official training runs and the winner is decided on who gets the fastest time during the final.

As the name suggests, this event combines the slalom and the downhill. The first run is the downhill event with the slalom following. The timing of both events is added together to determine the winner.

Vonn is a fighter, so as long as her injuries don't get the best of her, you should expect to see her in all three events. And with her incredible skill and determination, she just might win Team USA another gold.