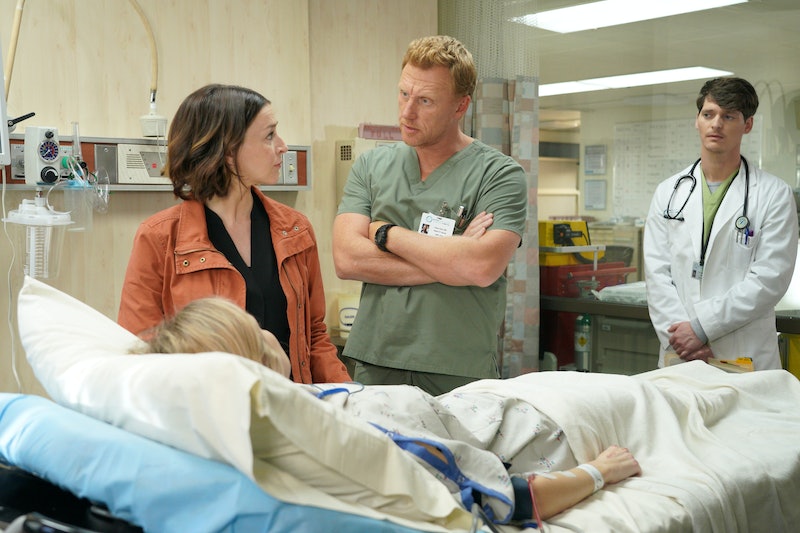 Grey's Anatomy's very well could have been sending a message to Dr. Owen Hunt with the title of its Thursday, Nov. 7 episode, "Papa Don't Preach." When Owen and Amelia argued about a patient's abortion, Dr. Hunt's views seemed to be largely symptomatic of some more deeply rooted issues. The surgeon let his personal baggage — and a bruised ego — bleed into his professional life to the point of denying this patient her right to health care. The reason for his emotions essentially superseded his Hippocratic Oath: Amelia blurted out to him that she's pregnant with Link's baby during a (perhaps misguided) visit to Pac North. More on all that later.

The case at the center of the ex spouses' disagreement over women's reproductive rights involved a single mother who ended up in the Pac North E.R. following a fall down her basement stairs. The woman was devastated by Owen's news she's 8 weeks pregnant with a baby she can neither afford nor has the time to raise. She works two restaurant jobs and already cares for her young son, she explained.

"So you threw yourself down the stairs?" Owen scolded the woman, insinuating her fall was an reckless attempt to abort her pregnancy. It turns out he'd jumped to an incorrect conclusion, though the patient's fall was indirectly related to an abortion attempt. With no insurance, and after multiple attempts to get an appointment at a clinic that offered financial assistance, the woman revealed she'd resorted to using an online recipe for a self-induced herbal abortion at home. Desperate to make sure the herbs worked, she explained she'd doubled the recipe, and thus became lightheaded and lost her balance while hauling the laundry basket up and down the basement stairs.

Amelia was on hand because Owen, to his credit, accepted her advice that a woman may be more comfortable confiding in another woman about something so deeply sensitive and personal. (Owen could have basically been a poster boy for why that's the case in this episode.) Sympathetic to the woman's situation, Amelia assured her that after Owen finished her minor abdominal procedure, someone from OB could perform the abortion. Enter misanthropic Owen, who abruptly snatched away her solace, inexplicably insisting they just "focus on the fall injuries first" and "address the pregnancy" once she's out of the woods.

"Why not just give her the help she’s asking for?" an incensed Amelia asked her ex, once in the privacy of the hallway. Owen's official answer, at the time: "I'm a trauma surgeon, I don't order abortions." What he really meant, however, was that he was projecting his own issues onto the woman — despite having no personal connection to her case whatsoever.

His decision to thwart the woman's opportunity to safely abort her pregnancy is one that would majorly affect her life, not to mention her health, in the short term. And how did we get here? If Amelia had changed her mind about wanting to have a baby (over time, by the way), surely he'd be doing this woman a favor by denying her health care because she could eventually change her mind too, right? That seemed to be Owen's thought process anyway. And there's no way Cristina's decision to abort their baby back in Season 8 didn't have a triggering effect here, too.

When Amelia finally confronted Owen again for refusing the woman the help she needed, she questioned how much their history factored into his decision. Amelia even outwardly asked if he refused the patient an abortion because she wanted to help her have one. "Is this about me?" Amelia asked Owen. "Is this because I'm pregnant, so you think that women who say they don't want babies are just going to wake up one day and change their minds?"

Owen at least got points for self-awareness here, admitting his actions were influenced by the hurt he could only describe by invoking the old "it's not that you didn't want to have a baby, it's that you didn't want to have a baby with me" argument. He also threw down the victim card, whining about seeing Amelia happy and having a baby with another man after she'd caused him the pain of divorce because she didn't want kids. Can we pause for a moment to remember that Owen chose to be with his "soul mate" Teddy, aka the woman with whom he just had a baby himself? (Side note: He didn't have the best reaction to Teddy's pregnancy news either.)

For whatever reason, Amelia soothed Owen's hurt pride, apologizing and assuring him that she indeed didn't want kids before now. (Apparently Owen doesn't realize that people can evolve?) Amelia even confessed she'd been unsure about motherhood to the point that she'd initially considered having an abortion herself. By conversation's end, they seemed to be amicably on the same page, however, and Owen even copped to being "terrible" to his patient and owing her an apology.

Off screen, not everything can usually be wrapped up in such a neat bow, however. Grey's has certainly been keeping it real as far as shining a light on real-life health care issues (see Meredith taking on the insurance industry), so it's worth noting this storyline could also just as easily be ripped from the headlines, so to speak. Someone else will occupy the fictional patient's bed in the next episode, and there will be another gripping story to follow. When doctors behave like Owen did, in the real world, however, the reverberations tend to be much greater.

More like this
Shonda Rhimes Responded To The Surprise Exit Of A Day 1 'Grey's Anatomy' Figure
By Grace Wehniainen
'RHOSLC' Star Jen Shah Refuses To Do A Post-Sentencing Interview With Andy Cohen
By Brad Witter and Jake Viswanath
9 Time Catherine Cawood Was An Absolute Badass In Happy Valley
By Sophie McEvoy
'GoT' Star Emilia Clarke Says She "Just Can't" Watch 'House Of The Dragon'
By Brad Witter
Get Even More From Bustle — Sign Up For The Newsletter
From hair trends to relationship advice, our daily newsletter has everything you need to sound like a person who’s on TikTok, even if you aren’t.