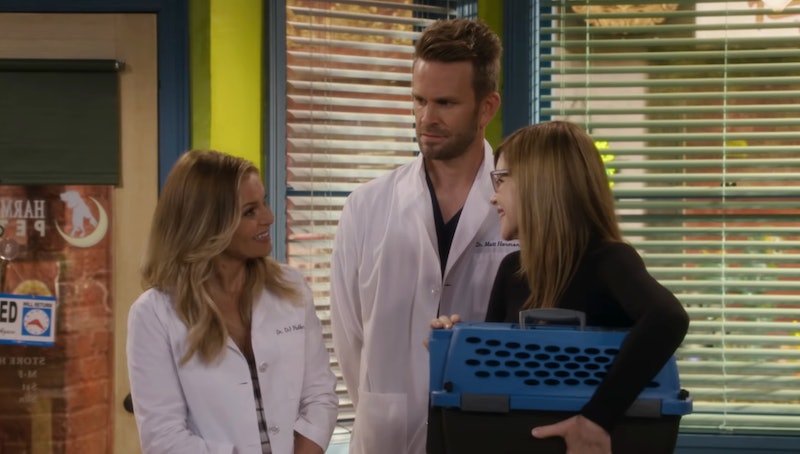 Spoilers ahead for Fuller House Season 5 Part A. Throughout their runs, Full House and Fuller House have had quite a number of musical guests with artists like the Beach Boys and New Kids on the Block popping. Following her Grammy-winning children's album, Lisa Loeb guest stars on Fuller House and her visit to D.J.'s vet clinic turns out to be incredibly helpful for Steph's career. While it takes a bit of scheming, D.J. gets Stephanie in front of the "Stay (I Missed You)" singer to perform the song she wrote for her daughter Dani. And as Loeb has written five children's albums herself, she makes for a great mentor for Steph in this next phase of her career.

Loeb is best-known as an indie singer-songwriter back from the original days of Full House in the '90s. (Her first single "Stay" from Reality Bites came out a year before Full House ended.) D.J.'s ex and business partner Matt is quite smitten with Loeb coming to their vet practice for the care of her cat. But D.J. is more worried about how she can set Steph up with the musician. D.J. isn't even aware that Loeb's "Feel What U Feel" won Best Children's Album at the 2018 Grammys. But Steph knows and so she performs her wishing well children's song for Loeb.

Loeb gives a performance herself in "Five Dates with Kimmy Gibbler." But instead of one of her children's songs, she plays a newly released single from her forthcoming album for adults A Simple Trick to Happiness. The song is "Sing Out," which Loeb told Queerty is an LGBTQ pride anthem that she released on 2019's National Coming Out Day on Oct. 11. She wrote the song with Eric Lumiere and said it's about "celebrating who you are, who I am, who we are individually, and that touches on feelings of feeling insecure to be yourself, and realizing how important it is to celebrate yourself" while supporting the LGBTQ community. Of course, it's a little ironic that it happens in the same episode as Kirk Cameron's cameo, but that might have been the point of featuring both stars to begin with.

After hearing (and harmonizing with) Steph's song, Loeb invites the Tanner sister to join her as her opening act on tour. In real life, Loeb does have a few tour dates coming up for the end of 2019 and in 2020. But while you probably shouldn't expect Jodie Sweetin to show up at them, it's possible Loeb could come for the second half of Season 5 as Steph's children's musician career launches — especially since Loeb knows a thing or two about transitioning her career to become an award-winning children's music performer.

But even if Loeb doesn't return for the Fuller House finale, Steph has the "I Do" singer-songwriter to thank for kicking off this new chapter in her music career inspired by her baby daughter.