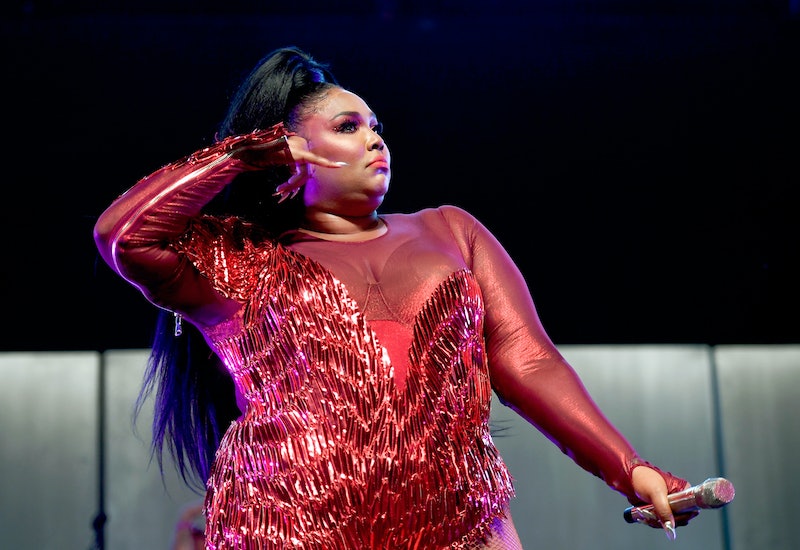 If you haven't heard of Lizzo yet, it's time to crawl out from the rock you've been living under and get it together. The flute-playing rapper is having a major moment, what with the release of her new album, Cuz I Love You, and the already sold out first leg of her "Cuz I Love You" tour. Good news, though: Lizzo just added a ton of new tour dates throughout the fall of 2019 — dubbed the "Cuz I Love You Too" tour — according to a recent press release obtained by Bustle. You've officially been given a second chance to see Lizzo live. Don't sleep on getting tickets this time around.

Back in January, Lizzo announced her plans to tour the U.S. and Canada in support of her third studio album, Cuz I Love You. At the time, her major label debut had yet to be released, but there was already plenty of hype surrounding the 29-year-old star. Flash-forward to the release of her album on April 19, and the initial dates of that tour have fully sold-out.

On April 22 — just three days after the release of her album — Lizzo's team revealed that they'd decided to add even more shows to the second leg of her North American tour, starting in Portland, OR, towards the end of July. After that, she'll be hitting up a ton of cities throughout September and October, concluding with a show in San Fransisco, CA, on Oct. 27.

The rapper, herself, posted an announcement about the second leg of her tour on Twitter on Monday as well, writing, "The 1st tour sold out so damn quick we had to do it again!!! Allow me to introduce the *DRUMROLL PLEASE* .................. Cuz I Love You Too Tour."

According to her tweet, pre-sales for the new dates start on Tuesday, April 23. And fans are (understandably) losing their minds about the exciting news, and their responses to Lizzo's post are pretty amazing.

"CAN U LET US BREATHE? CAN U STEP OFF MY NECK?," one fan, @justdumphim, wrote. "Yes girl!! Get that money and sell out those bigger venues!!" another fan, @ang_15s, tweeted. "YES YOU ARE COMING TO MY CITY HALLELOO," a third fan, @heyyoukid415, exclaimed.

Now, on the other hand, a lot of fans have been expressing some serious disappointment that Lizzo won't be hitting up a few choice cities, in particular. She's only human, though, guys. Give the woman a break. Besides, having to travel to another city or state to her catch her is a solid reason for a road trip, right?

The singer kicks off her "Cuz I Love You" tour today, April 22, in California. And she just got done with two weekends of killer performances at Coachella, which resulted in plenty of high praise.

"Lizzo has quickly cemented herself as one of 2019’s preeminent pop figures," John Flynn and Debi Del Grande from Consequence of Sound proclaimed of her Coachella performance. "[Her] set only spanned 12 songs, but every track got the crowd grooving more than the last ... Lizzo’s energy went unmatched," the outlet added.

So, go ahead and get your finances in order. Tickets for the second leg of her tour go on sale soon, and there's no way they'll very last long.