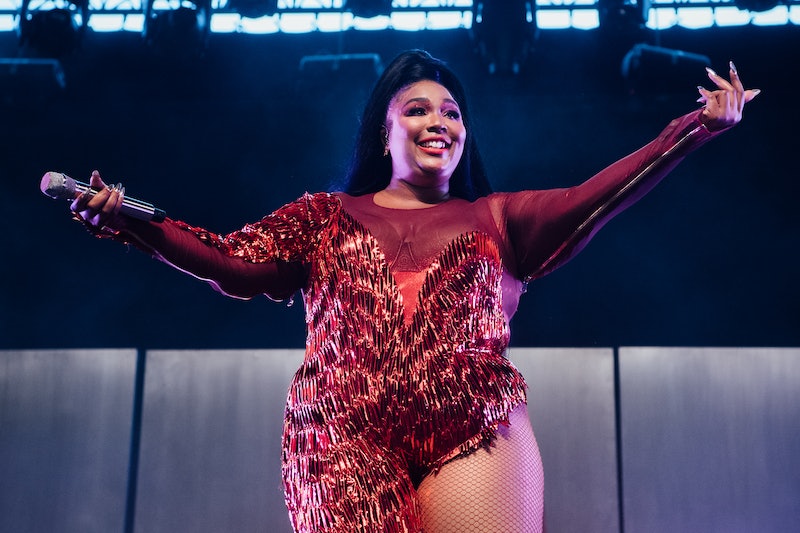 If Lizzo’s old YouTube videos prove anything, it is that she was always destined for fame… and she knew it. As sites like Billboard and Rolling Stone reported this week, an old video of Lizzo singing Adele’s “Someone Like You” has resurfaced and is making the internet rounds. The throwback clip is absolutely terrific, and 23-year-old Lizzo's rendition of Adele's ballad is only but one of the gems that exists in the treasure trove that is Lizzo’s YouTube page. You want to watch this year's headliner of Bustle's Rule Breakers festival play the flute to one of the biggest songs of 2009? Or watch her perform her former groups’ music? Or witness her basically predict the future? Look no further than the series of YouTube videos she tossed onto the internet some years before her first major label album Cuz I Love You would take the world by storm.

Let's start with the video that inspired this walk down memory lane. In the clip, which she uploaded in 2011, the “Truth Hurts” musician plays the piano and belts out the second single off of 21 in front of her webcam. “Hey! Bored & playing around with music again,” reads the video's description. “Found the chords and decided to have some fun. Thanks for watching! :)” You better believe Lizzo delivers. And now for the obvious question: Can Adele and Lizzo do a duet? Please?

In another video, which went up in 2010, she deals with being snowed in accordingly: She plays the flute along with JAY-Z and Alicia Keys’s “Empire State of Mind.” It’s a delight. In a video from 2012, Lizzo & The Larva Ink, Lizzo's old duo, perform a song for a Minneapolis radio station. In another that was uploaded in 2009, Lizzo sings a song by her old band Ellypseas. And in one that went up in 2011, she walks around the halls of Colorado’s Red Rocks Amphitheatre, points to a photograph of a Björk playing a show at the venue, and then looks into the camera and says that there will one day be a picture of her on that very wall.

When Lizzo played Red Rocks in May 2018, she shared this video on social media, celebrating the full-circle moment. “Found this old video of me from 2011 at @RedRocksCO , at the end of this video I say 'I’m gonna have my picture on this wall one day',” she tweeted. In a followup tweet she wrote, “Fast forward to now— ON STAGE AT RED ROCKS Speak your dreams into existence! Thank you @HAIMtheband. Tour of dreams!” The video popped up again just this May when journalist Yashar Ali tweeted it out. "Wow, I just found this video of @lizzo from 2011, years before she became famous, wait for the end," he wrote. "This is backstage at the Red Rocks Amphitheatre in Colorado."

She believed she would one day play Red Rocks, and what do you know? She eventually went on to play Red Rocks. Such is the power of putting your dreams out into the universe. And, ya know, being a wickedly talented artist and transcendent performer probably doesn't hurt either.