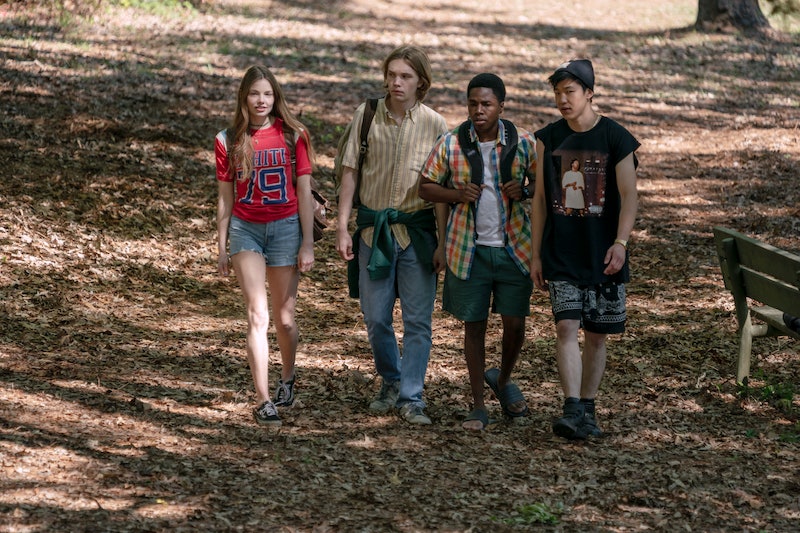 If the first trailer for Looking For Alaska reminded you of the brooding teen dramas of the early aughts, that's because there's a strong connection between the Hulu series and an iconic teen series. At the 2019 Television Critics Association summer press tour, producer Josh Schwartz revealed that Looking For Alaska will have a major connection to The O.C., which he created back in 2003.

According to Entertainment Weekly, Schwartz — who is working on the adaptation of John Green's novel with partner Stephanie Savage — revealed on Friday, July 25 that Looking For Alaska will take place in 2005. In order to perfectly capture that early aughts vibe, Schwartz revisited the iconic soundtracks that he created for The O.C. and used that music to inspire his new series. "We worked really hard to make sure pretty much all the music that’s in the show is from that year,” Schwartz said.

"It was pretty fun," he added. "I got to pull out some of my O.C. playlists that I had back in the day, music that never made it onto the show. It was like revisiting moments." Like the O.C. before it, Schwartz also asked several artists to cover some of the biggest songs of 2005 for Looking For Alaska, which will make viewers feel like they're right back in Orange County once more.

"We did a cover of "Orange Sky" [by Alexi Murdoch] that is really beautiful,” Schwartz said, according to EW. "We have a cover of a Franz Ferdinand [song], and 'I Will Follow You Into the Dark,' we have an incredible cover of that."

In fact, that Death Cab for Cutie song has a particularly strong connection to The O.C. for Schwartz: "That is a song at the time that we wanted to license it for The O.C., but it was too personal to the band at that moment," he said. "And now we were able to do it. Music that was really inspiring to us we had the opportunity to use it."

According to Schwartz, it's not just Looking For Alaska's soundtrack that will remind viewers of The O.C.; the producer and screenwriter also noted that there are strong similarities between the shows' two central couples. "There are definitely elements of it, themes or characters that I’m intrigued by and write about," he said about Looking For Alaska's Miles (Charlie Plummer) and Alaska (Kristine Froseth) possibly being compared to Ryan and Marissa. "The universality of what teenagers go through is timeless. You can watch John Hughes movies today and still relate to them. What’s at the core of what these characters are going through is timeless."

Based on Green's 2005 breakthrough novel, Looking For Alaska centers on Miles "Pudge" Halter, who leaves his traditional high school in order to attend Culver Creek Prep boarding school in rural Alabama. While there, he falls in love with the mysterious, reckless Alaska Young, but his world is shaken after a major tragedy forces him to reevaluate everything he thinks he knows about himself and his friends.

The series will also star Denny Love as Miles' fast-talking prank-loving roommate Chip "The Colonel" Martin and Jay Lee as aspiring DJ Takumi Hikohito. The cast will be rounded out by Veep's Timothy Simons as the strict dean Mr. Starnes and This is Us star Ron Cephas-Jones, and will premiered on Hulu on October 18.

While fans of Green's book will have to wait until Looking For Alaska arrives on streaming services to find out how faithfully Schwartz has adapted Miles and Alaska's story, fans of teen dramas everywhere can take comfort in the fact that this series will be packed with early aughts nostalgia.