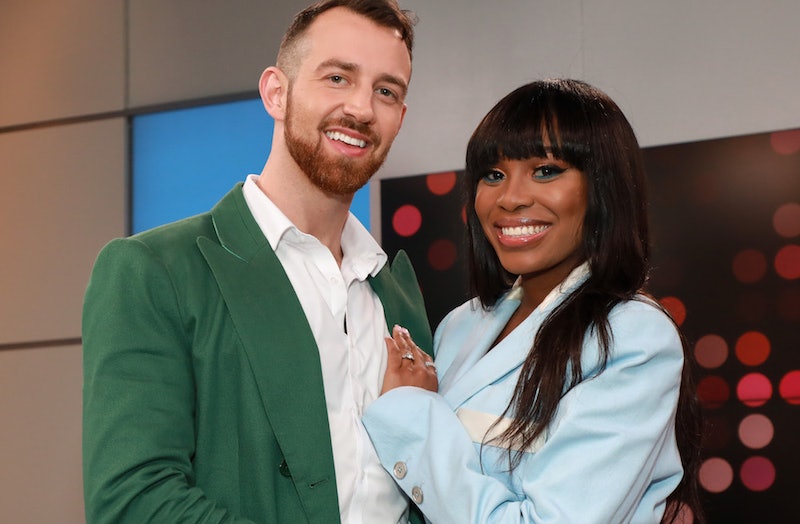 Fan favorite pod couple Lauren Speed and Cameron Hamilton have advice for the cast of Netflix’s Too Hot to Handle. Lauren and Cameron, who met and wed on Netflix’s hit reality series Love is Blind, spoke with Entertainment Tonight via Zoom on April 15 to offer relationship tips for Netflix’s new cohort of attractive hopefuls looking for love. Available on Netflix on April 17, Too Hot to Handle follows a group of singles as they mingle on the shores of paradise for the chance to win a $10,000 grand prize under one condition: no sex is allowed.

Ahead of the show’s debut, Lauren and Cameron offered the contestants their secret to maintaining a relationship post-TV show. "Always keep the communication open with your partner and just be supportive," Lauren told ET. "Take time to really feed into each other, because sometimes when you get thrusted into the public eye, it's so easy to get lost in the internet and all this stuff.” She added, “I think it's really important to be on the same page as your partner and take that time."

Cameron added, “Trust the relationship that you have with your partner.” Echoing the perils of internet comments, he continued, "If someone sees the show and says, 'Oh, it's weird the way you look at her, touch her,' or something, talk to your partner about it. Don't just assume that this random stranger on the internet is correct."

Hosted by Nick Lachey and Vanessa Minnillo, Love is Blind followed a group of singles who had to form an emotional connection — without ever seeing each other’s faces — before deciding to get engaged within 30 days. The couples eventually meet face-to-face once both agree to a proposal. Along with yielding viral phrases (“obviously, I’m Nick Lachey”) and moments of dogs drinking from wine glasses, the series propelled its contestants into the pop culture zeitgeist with Lauren and Cameron emerging as a fan favorite.

Netflix renewed the series for a second season in March. While it’ll be a brand new cast, this may not be the last we see of Lauren and Cameron: Netflix is reportedly discussing a spinoff with the two. They’ve expressed an interest, too. “We want to share more of our story,” Cameron told E! News in March. Lauren echoed similar sentiments to Variety that month. “I would absolutely love to do [a spin off]," she said. "Especially because I feel like our story's just starting. Now is where all the good and juicy stuff happens."