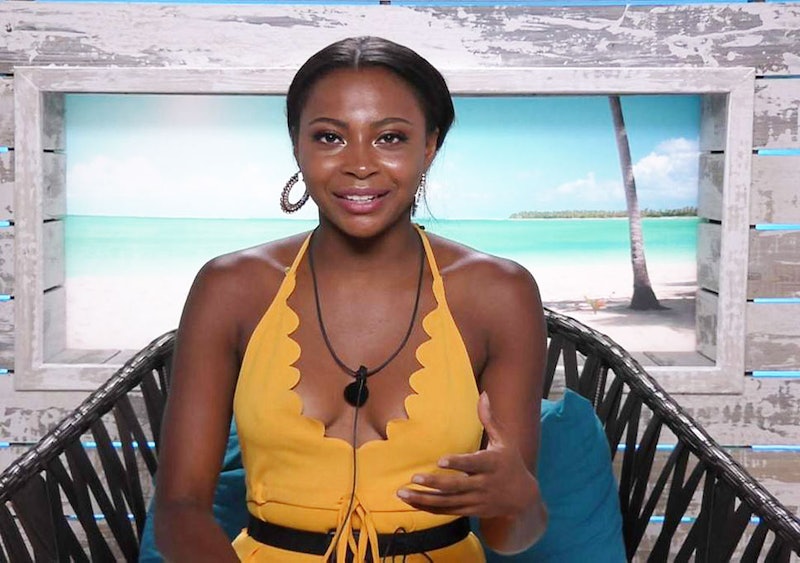 We all know a certain contestant's air time has been dwindling over the past couple of weeks. But Tuesday night's episode was ridiculous. I mean seriously Love Island, where is Samira Mighty? I kid you not, that question has actually been trending on Twitter.

Thanks to her struggle to find romance in the villa, Love Island's Samira has had about as much attention as that gorgeous view of the Majorcan countryside behind the infinity pool that pops up about once every five episodes. Meanwhile Alex, who has had a similar "journey", appears to have the whole of the UK keeping their fingers crossed for him, and big chunks of screen-time devoted to his quest for love. But Tuesday's episode took things to new levels of Samiralessness and it didn't go unnoticed by Love Island fans.

Amongst the Adam-related drama, there was a distinct lack of Samira to be seen. Even though her lack of love interests means she doesn't often feature that prominently, she can usually still be found offering the other girls in the villa advice or boosting their self-confidence when things get a little rocky in their relationships. But in Tuesday's show she wasn't so much sidelined as completely absent from almost the entire thing.

"Where's Samira?" trended on Twitter during the episode, with eagle-eyed viewers noticing that as well as her total lack of air time in the first half, she was mysteriously not in bed next to Alex when the villa residents turned in for the evening. Some fans were reminded of Niall's mysterious departure from the show for which we still haven't had a full explantation. There were also plenty of memes comparing her to Where's Wally and joking that she's now effectively a member of the camera crew.

But while yes the memes are pretty funny and I honestly have no clue as to why she wasn't in bed with Alex (maybe she'd nipped to loo?), the "Where's Samira?" question is more serious than it might seem.

Love Island isn't known for being the most diverse of shows, so it was great to see a black woman heading into the villa this year. But true diversity isn't just an exercise in box ticking or quota-filling, it has to be supported and sustained throughout the show. And, if you ask me producers just haven't been trying hard enough to find Samira her match.

Over the past few weeks, the number of boys that have entered the villa is way lower than the number of girls. So far there has been a total of five female new arrivals (Georgia, Rosie, Megan, Ellie, and Zara) compared to only two male newbies (Josh and Charlie). Dr. Alex's endearing awkwardness has obviously earned him the nation's affection, which I'm guessing is why the producers are sending in more girls, so we can see the storyline develop. But by skewing the new arrivals in his favour, they're not giving Samira a fair chance.

If there's no one for her to find love with, then of course she's going to be sidelined in a show that's about finding love. Surely we can have both of Alex and Samira's romantic journeys running in tandem? Plus the number of viewers tweeting their concern at Samira's absence shows they're invested in her. They want this content. And what kind of message would producers be sending out about their commitment to diversity if the show's only black woman contestant is dumped from the island after two weeks without even a hint of romance? A deeply disheartening one, that's for sure. I have reached out to ITV for comment, but so far, I've been given no answers as of yet.

The solution is simple. The producers just need to send in some more boys, and preferably ones who recognise that Samira's an absolute "sort", inside and out. I know they can do it, they found Camilla Thurlow's perfect match in Jamie Jewitt last year, and both of the latest newbies Ellie and Zara fancied Alex.

Plus, more boys would not only increase the chances of Samira coupling up with someone and give her more air time as a result, with any luck, it would also give Adam some competition and bring him down a peg or two. And I think we can all agree that the series, the dating scene in Newcastle, and possibly the universe as a whole can only benefit from that. Your move, Love Island producers.

More like this
The Love Island 2022 Reunion Drama, Explained
By Sophie McEvoy
Why Gemma Owen’s Mum Louise Might Not Be Luca’s Biggest Fan
By Frances Stewart
'Love Island’ Fans Cannot Get Over David's Job
By Sophie McEvoy and Sam Ramsden
Michael Owen Has Shared His Thoughts On Luca & Gemma
By Bustle UK
Get The Very Best Of Bustle/UK