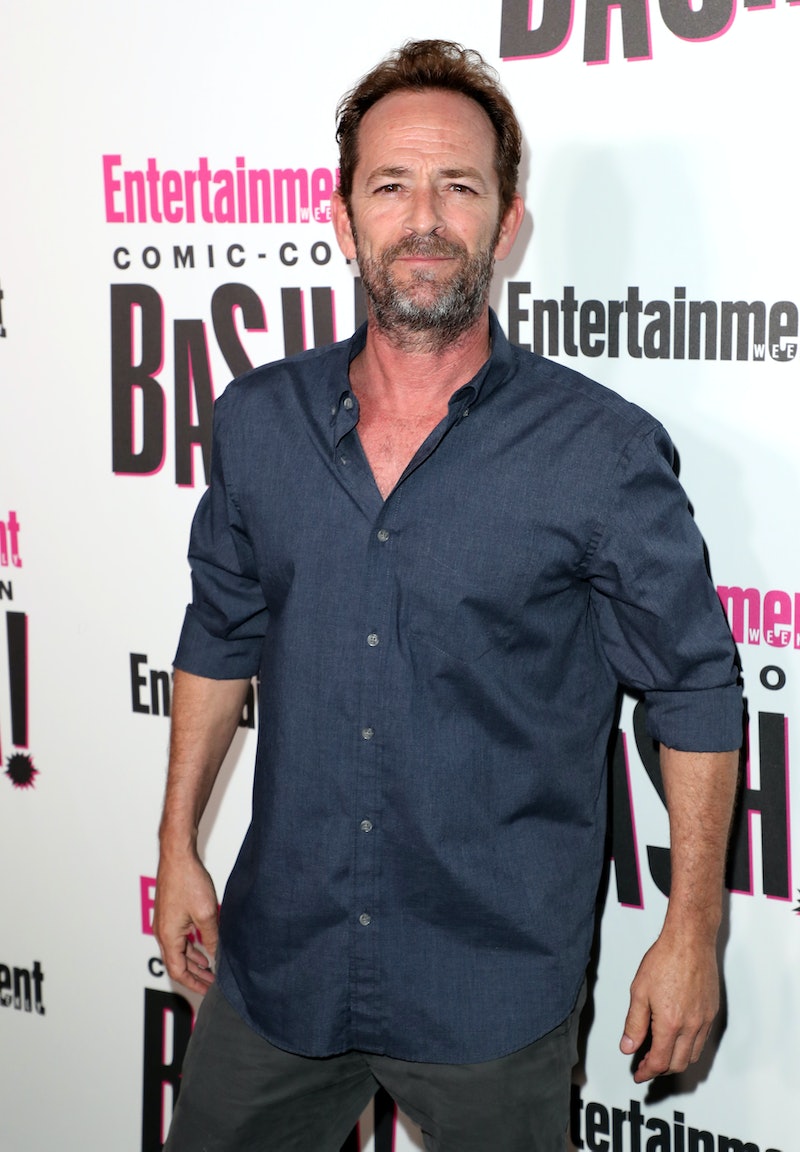 While so many people have been very public about the impact of Luke Perry's death, there will also be an opportunity for those closest to him to gain more private closure. TMZ obtained an invitation for Luke Perry's private memorial service, which will reportedly take place on April 13. The invitation reads, "Please join the Perry family as we remember and celebrate the extraordinary life of Luke Perry."

The event includes a reception followed by the memorial an hour later at a Warner Brothers Studios lot in Burbank, California. TMZ reported that hundreds of people were invited to the event, which will include those who worked with him on Beverly Hills, 90210 and Riverdale, among other TV shows and movies. TMZ sources said that the invitation list goes beyond his friends who happen to be famous faces. It also includes crew members, makeup artists, wardrobe stylists, hair stylists, and of course, his family members.

As fans know, Perry passed away after he was hospitalized for a stroke on Feb. 27. When the news broke about the actor's death on March 4, Perry's rep released a statement to Bustle, which read:

Since then, Perry's family and friends have been vocal about how much he touched their lives. Before he died, his Beverly Hills, 90210 costar Shannen Doherty revealed that she was in touch with Perry when he was hospitalized. In a March 3 interview with Entertainment Tonight, Doherty admitted, "I can't talk about it here, 'cause I will literally start crying but I love him and he knows I love him." She even made a reference to their characters on the show when she remarked, "It's Luke, and he's my Dylan."

Perry rose to fame on Beverly Hills, 90210, but that wasn't the only popular TV show he was a part of. He was also an actor on Riverdale, a show that temporarily shut down production after he passed away. The Riverdale cast and crew also released a statement on Twitter.

Even though his costars became like family to the actor, Perry's own children also released touching public statements. His daughter Sophie posted about his passing on March 5, one day after the news broke.

"I cannot individually respond to the hundreds of beautiful and heartfelt messages, but I see them, and appreciate you all for sending positivity to my family and I. I’m not really sure what to say or do in this situation, it’s something you aren’t ever given a lesson on how to handle, especially when it’s all happening in the public eye. So bear with me and know that I am grateful for all the love. Just, being grateful quietly."

"He was a lot of things to a lot of people. To me, he was always Dad. He loved and supported me in everything, and inspired me to be the best that I could possibly be. I’ve learned so much from you, and my heart is broken thinking about everything you won’t be here for."

Jack concluded, "I’ll miss you every day that I walk this earth. I’ll do whatever I can to carry on your legacy and make you proud. I love you Dad."

Perry's costars, his fans, and other celebrities have been very public about the great loss they felt when he passed away. Hopefully, his friends and family will be able to get some much-needed closure when they unite for his memorial service this month.