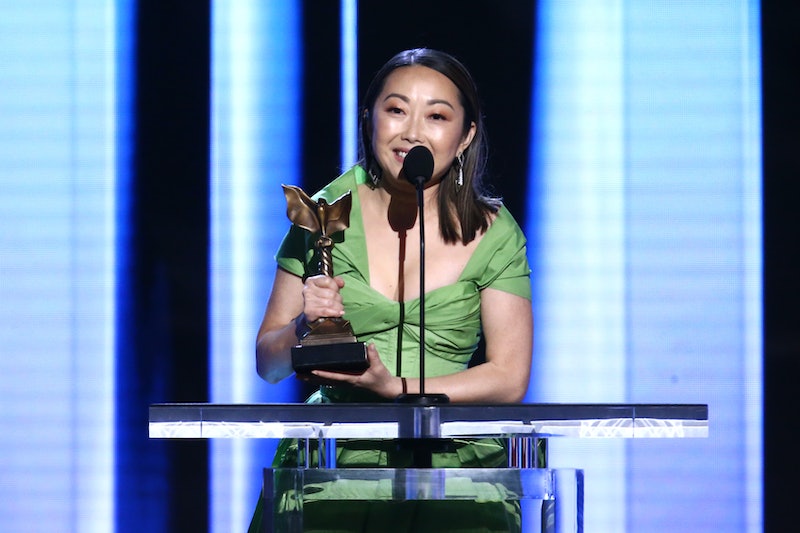 Female filmmakers were front and center at the Film Independent Spirit Awards on Saturday. The Farewell took home the Best Feature win at the ceremony broadcast on IFC — and Lulu Wang’s Spirit Awards speech had one resounding message: just give female filmmakers the freakin’ job. On par with the Oscars’ snub of The Farewell and female directors as a whole this year, Wang called out Hollywood gatekeepers in an impassioned acceptance speech at the Aubrey Plaza-hosted award show.

“There’s been a lot of conversation this year about how to encourage more women to be in film or get more women into the conversation,” Wang told the crowd. “I just have to say that we don’t have to encourage women. There are lots of women making films and who want to make films… What women need is just the job. Just give them the freakin’ job. Give them the money.”

She continued, “Just give the women the jobs. The only reason that I’m up here is because these incredible people gave me an opportunity… They didn’t have to take a chance on me but they did.” Later in the speech, Wang thanked another pivotal female force in her life: her grandma, otherwise known as her nai nai. She concluded, “I’m sorry, mom and dad, for putting all of our baggage out there.”

Based on an actual lie from Wang’s life, The Farewell follows New Yorker Billi (Awkwafina) as she returns to China under the guise of a fake wedding after she learns that her grandmother, Nai Nai (Zhao Shuzhen), only has a short time to live post-cancer diagnosis. In a decision that conflicts with Billi’s Western ideals, the family decides to keep Nai Nai in the dark about her prognosis. Along with Best Feature, The Farewell garnered Shuzhen a Best Supporting Female win for her role as Nai Nai at the ceremony on Saturday.

While the film was completely shut out at the Oscars this Sunday, the cast has taken it all in stride. “My emotional reaction to all of this really is that I'm grateful for this journey,” Awkwafina said of her snub at the Television Critics Association press tour in January. “For that, me personally, I think there's always more work to be done. Of course, I've had a pretty exciting ride.”

She added of the lack of female directors, “Bottom line, there were some amazing performances this year. I think all of them were warranted as they should have been. That's not also to say that we can't ignore the fact that there are some incredible movies that were women-helmed, including mine.”

More like this
Alicia Silverstone Revives Her 'Clueless' Character In This Super Bowl Commercial
By Jake Viswanath
Vanessa Hudgens Is Reportedly Engaged To Cole Tucker
By Jake Viswanath
How Andrea Riseborough Got Nominated — & Almost Disqualified For An Oscar
By Jake Viswanath
Austin Butler Recalls Lisa Marie Presley Showing Him Elvis’ Bedroom
By Jake Viswanath
Get Even More From Bustle — Sign Up For The Newsletter
From hair trends to relationship advice, our daily newsletter has everything you need to sound like a person who’s on TikTok, even if you aren’t.