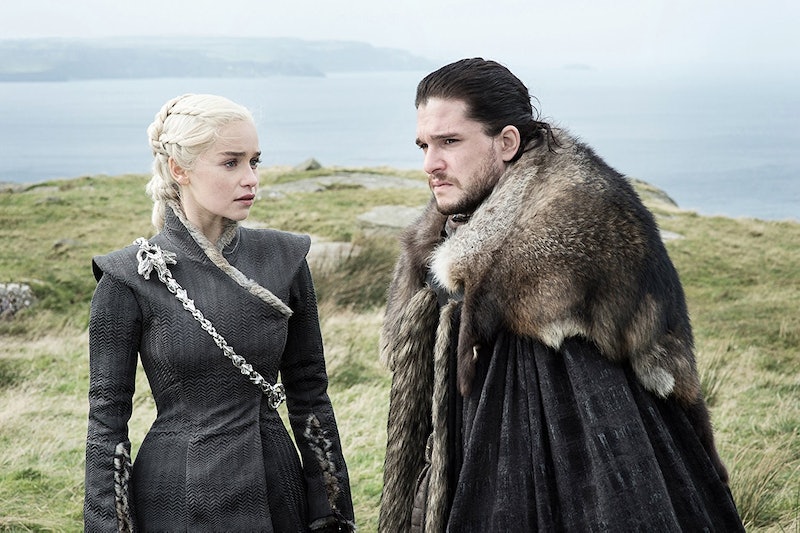 The title for the season 7 finale of Game of Thrones has been revealed, and it's quite intriguing: "The Dragon & the Wolf." At first glance, the title would appear to refer to budding relationship/alliance between Daenerys Targaryen and Jon Snow, but GoT episode titles often have dual meanings. And the obvious second meaning for this episode is that it refers to the dual nature of Jon Snow, since he is both a Targaryen (dragon) and a Stark (wolf). So if that's the case, and this episode finally brings that fact into the open, does that mean fans will see the secret wedding of Lyanna and Rhaegar, Jon's parents?

The story believed by most in Westeros states that Robert Baratheon's rebellion took place because Rhaegar Targaryen kidnapped and raped Lyanna Stark, who was betrothed to Robert. But there is evidence that Lyanna was in love with Rhaegar and ran away with him willingly, meaning their baby (Jon Snow) was a product of love, not rape. The most recent evidence of this came in episode five, "Eastwatch," when Gilly read something about a secret wedding involving Rhaegar that took place in Dorne before she was rudely cut off by Sam. We can deduce that this wedding would have been between Rhaegar and Lyanna, but will we see it in the show?

Even though the wedding took place before the events of the series, that doesn't mean it's off limits. Thanks to Bran Stark's abilities as the Three-Eyed Raven, he has the ability to view events of the past, like in season 6 when he witnessed the creation of the White Walkers thousands of years ago, or when he saw a young Ned Stark take possession of the infant Jon Snow at the Tower of Joy. There are also hints that Rhaegar will appear this season, and the only place that makes sense for him to appear would be at this wedding, confirming that he is Jon Snow's father (which technically has not been confirmed yet on the show).

So how would this go down? Let's say the episode opens with the flashback to the wedding, via Bran hanging out by the weirwood tree. This would show the audience what they should already know about Jon's parents, while also making sure it's fresh in their minds when it comes time for Jon to learn it for himself later in the episode, which given the title, will likely happen. But it may not be Bran who tells him.

Cersei obviously has something up her sleeve for this big meeting with Jon, Dany, and everyone else, and she's not going to care about the army of the dead (remember, she already has an undead soldier in the Mountain). Her only concern is defeating her enemies, and she can possibly take down both Daenerys and Jon Snow by revealing Jon's parentage. Dany's claim to the Iron Throne is that she is the sole legitimate heir following her father, the Mad King, but if Jon is the product of a married Rhaegar and Lyanna (i.e. not a bastard), then he is technically ahead of her in the line of succession due to the patriarchy of Westeros.

If Cersei reveals this, it will destroy Dany's claim to the throne while also potentially driving a wedge between her and Jon. But how will Cersei find out this information? Well, if someone can stumble upon it in some book at the Citadel, then you can bet Cersei — or Qyburn, more likely — will have no trouble digging it up, either.

This is just a theory, of course, but it certainly seems possible that fans will see the wedding of Rhaegar and Lyanna in the Game of Thrones season 7 finale. But if not, at the very least, they'll almost certainly witness Jon Snow finally learn the truth about his parents.