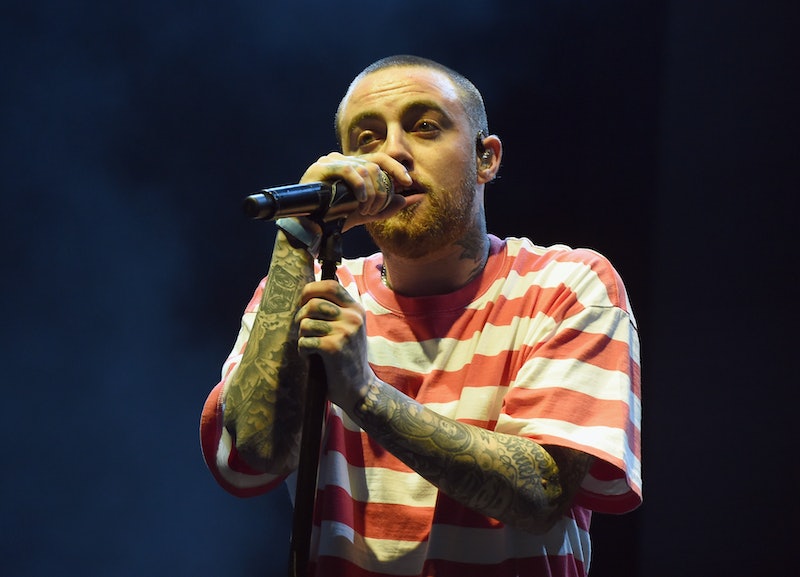 On Sept. 4, BuzzFeed News reported that a 28-year-old Los Angeles man named Cameron James Petit is facing charges in connection to Mac Miller's death. He has been charged with allegedly supplying Miller with counterfeit pills that led to his overdose nearly a year ago in September 2018. It is currently unclear if Pettit has retained attorney to represent him yet; court documents did not provide the name of his lawyer.

Pettit was arrested and charged on Wednesday afternoon in United States District Court in downtown Los Angeles, according to the U.S. Attorney's office. He will be charged with one count of distribution of a controlled substance and faces a statutory maximum sentence of 20 years in federal prison, per BuzzFeed.

According to federal court documents, Miller contacted Pettit via text allegedly asking him to sell him 30-milligram oxycodone pills, as well as cocaine and the sedative Xanax days before his death. In the early hours of Sept. 5, Pettit allegedly agreed to sell him the drugs, according to texts obtained by the Drug Enforcement Agency. But, the affidavit alleged that Petit sold Miller "counterfeit oxycodone pills that contained the opioid fentanyl, a drug that’s 50 times stronger than heroin."

“Fentanyl disguised as a genuine pharmaceutical is a killer — which is being proven every day in America,” U.S. Attorney Nick Hanna said in a press release from the Department of Justice's U.S. Attorney Office following Pettit's arrest. “Drugs laced with cheap and potent fentanyl are increasingly common, and we owe it to the victims and their families to aggressively target the drug dealers that cause these overdose deaths.”

Miller had been very open about his experiences with addiction and sobriety in his own music, as well as in interviews. In a Vulture profile published on Sept. 6, 2018 — the day before Miller's death — the rapper said, "I used to rap super openly about really dark sh*t, because that’s what I was experiencing at the time. That’s fine, that’s good, that’s life. It should be all the emotions.”

Since last year, Miller's friends and fans have continued to honor the late rapper. His ex-girlfriend Ariana Grande has continued to pay tribute to him throughout her recent Sweetener tour. Back in June, Miller's posthumous song "That's Life" with 88 Keys was released with the permission of his family. The song was another sign that though Miller is gone, he will not be forgotten.