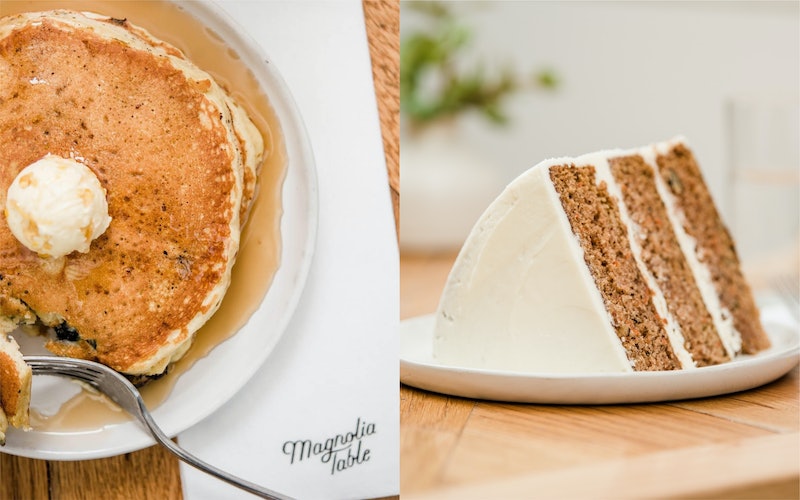 Get ready to drool. If you haven't already been hypnotized by the offerings at Magnolia Table, the Texas restaurant set up by Chip and Joanna Gaines, then you should start now. The Magnolia Table spring menu has just hit the interwebs and it already has people salivating. The Gaines are well-known for Fixer Upper, the home improvement show that they host, but when they set up Magnolia Table and Silos Baking Co., it became clear that their talents go way beyond throwing a hammer around and imagining the perfect seating arrangement for a breakfast nook. Food. Food is the other talent.

If you're not already familiar with their restaurant, it's all about healthy food catering for everyone — with an emphasis on sourcing locally. "We are a breakfast and lunch restaurant specializing in fresh, homegrown ingredients and good old fashioned cooking," their website explains. "We have something on our menu for everyone, including the kiddos, vegetarians, vegans, and folks with a gluten intolerance. Much of the produce used in our dishes is grown locally at Joanna’s farm garden, and many of our eggs come from her chickens, too! We also love using local vendors for menu staples like our grass-fed hamburger patties and freshly-squeezed lemonade." The freshly-squeezed lemonade touch might be a little heavy-handed, but you get the picture. Wholesomeness and all that.

And this spring, they're really upping their game. First and foremost, there's a traditional Carrot Cake which looks like something out of the diner of your dreams. They're also adding a Spring Berry Salad, Asparagus Fontina Quiche, and an Egg Salad Sandwich served on a freaking croissant, because bread is no longer good enough. But I have to say the real draw to me looks like the Lemon Blueberry Pancakes. "Our traditional pancakes filled with blueberries and lemon zest, topped with lemon butter," the description reads. "Served with two eggs cooked-to-order, house-made tater tots, and your choice of house sausage or thick-cut peppered bacon." I don't even eat bacon and I'm already an emotional mess just thinking about those pancakes.

They're also offering a Tea Selection, which is slightly misleading — it's actually a trio of finger sandwiches served with soup. It's almost like the traditional British tea, ready for if Meghan Markle comes to town, but, you know, with soup for some reason. If you're looking for something in the veggie land, there's a a delish-looking Harvest Wrap, complete with watermelon radish, avocado, mixed greens, cucumber, and heirloom tomato all wrapped up with herbed cream cheese. Perfect to go with pancakes.

If you've been thinking about hitting up Silos Baking Co. for something sweet and delicious, fear not — because they've got new spring offerings as well. I'm not only talking about their new Carrot Cake Cupcake (topped with a walnut and ready for the 'gram), there's also a totally magical looking Toasted Coconut option which is very on-trend looking.

Magnolia Table is still a relatively new restaurant, at just over a year old, but it continues to deliver. If you happen to be in Waco, Texas, you can swing by and grab a slice of cake — if not, you'll just have to keep on drooling.