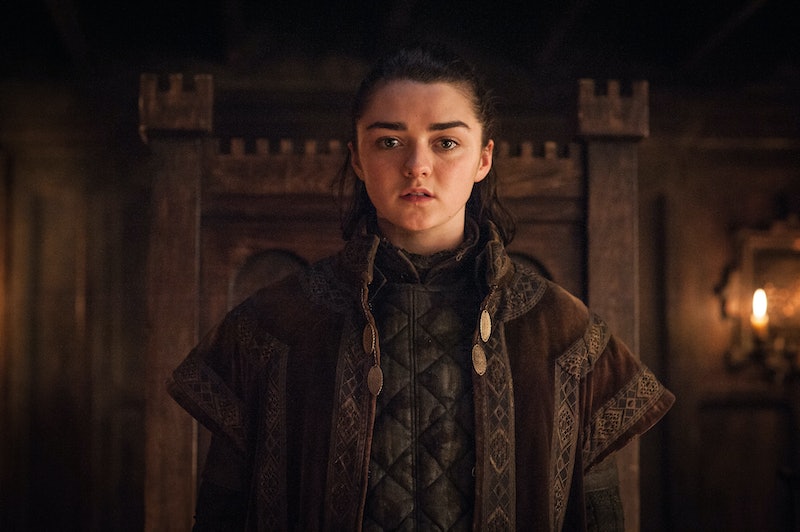 Arya Stark's final battle has been fought. On Saturday, July 7, Maisie Williams said goodbye to Game of Thrones, and the deadly character she's played since the series began. Williams shared an all-too fitting photo on Instagram to let fans know that she's completed filming for Season 8. The picture features what appears to be the actor's blood-soaked sneakers (fake blood, surely), accompanied by some hashtags that will have fans holding out hope that Arya survives the final season.

"goodbye belfast. goodbye arya. goodbye game of thrones. what a joy i've had. here's to the adventures to come #lastwomanstanding #barely #immasleepforthenextfouryears #justkiddingidontsleep"

Seeing the 21-year-old bid farewell to Arya is already emotional. She grew up over the course of eight seasons, and in the process, Arya transformed from a little girl rejecting gender norms into a deadly assassin. Williams' character has been a constant inspiration, and a key part of the series, but that doesn't mean Arya (or anyone else) will survive Season 8.

While it's probably a mistake to read too much into Williams' hashtags, it's hard not to notice that she captioned her photo with "last woman standing." Does this mean Arya makes it out of the series alive, while characters like Daenerys, Sansa, and Brienne are doomed? Or was Williams the last of the women to finish filming? The latter option seems to be the most likely.

In late June, Emilia Clarke posted her own farewell to Game of Thrones on Instagram. She wrote,

"Hopped on a boat to an island to say goodbye to the land that has been my home away from home for almost a decade.It’s been a trip @gameofthrones thank you for the life I never dreamed I’d be able to live and the family I’ll never stop missing."

Even though Clarke didn't specify whether she had completed filming, or simply finished filming in one locale, her post certainly made it sound like she had completed her journey as Daenerys. Meanwhile, Sophie Turner recently shared an image confirming she has traded Sansa Stark's red hair for a blonde style. As for Brienne of Tarth, Gwendoline Christie has been sharing photos from modeling gigs for weeks now, and Nathalie Emmanuel said goodbye to Missandei with an Instagram post. That only leaves one primary female character unaccounted for — Lena Headey's Cersei, but the actor isn't big on social media.

Given how many of her co-stars have already signed off, it's entirely possible that Williams was literally the last woman standing. That doesn't mean Arya is out of the woods (or that Sansa, Brienne, Cersei, Daenerys, and Missandei will all die in Season 8), but it does drive home the point that Game of Thrones is coming to an end. If the last scene hasn't been filmed at this point, there's no doubt it will be soon.

The Game of Thrones wrap party reportedly took place one week ago, giving the cast and crew a chance to celebrate all of their amazing work. Between the party and the farewells, it's clear there's not much (if any) show left to film. Thankfully, fans still have the promise of Season 8 to look forward to in 2019, but for the cast, it's time to start looking ahead for their next big adventure.

For Williams, that means starring in the play "I and You" at the Hampstead Theatre in London. On June 28, she announced her first post-Game of Thrones role on her Instagram page. Still, it's her most recent post, featuring nothing more than bloody sneakers and a goodbye to her beloved character, that makes the reality that Arya Stark's fate has been decided all too clear. Live or die, Arya is putting Needle away, and Williams is at the start of a brand new journey.