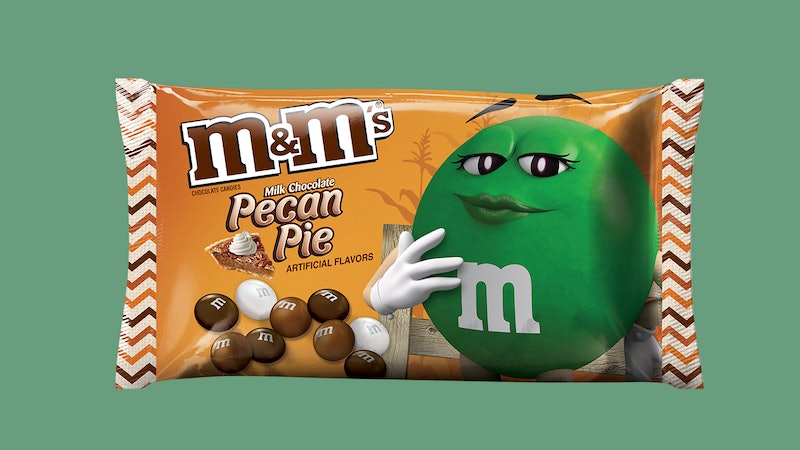 Does choosing between desserts sound like your personal version of hell? Do you believe candy and baked goods should live together in harmony? Do you want M&M’s and also pie at the same time? Then, Pecan Pie M&M’s are exactly what you seek.

The seasonal flavor first came out in 2015, according to Best Products. Since then, they’ve made an appearance on shelves around fall, whetting our appetites for the Thanksgiving meals in our near future. This year, the Instagram foodie account @snackstalker spotted a bag of the festive M&M’s at a local Walmart along with a bunch of other fall-flavored goodies. If you’re hoping to snag a bag at your local store, you may have to do some hunting as they appear to currently be out-of-stock on Walmart.com.

They are, however, in-stock on Amazon ... if you feel like paying $8.99 plus shipping for a single, 9.9-ounce bag. It’s actually not much more than the $8.20 Walmart.com is charging. (@Snackstalker didn’t list the in-store price in their Instagram post.) But considering you can pay $12.99 for six-times that amount of original M&M’s from Boxed, it’s a pretty steep price for some pie-flavored chocolate.

The first question I have is, why does the Green M&M look so cheeky on the packaging, like she has an M&M secret I must guess? My second question is, do the M&M’s actually taste like pecan pie? That depends on who you ask. The reviews on Walmart.com are mixed with an almost even split between five-star and one-star reviews. (There are slightly more one-star comments, but I wonder if that speaks more to our propensity to be vocal about the things we hate than it does the flavor of the M&M’s.) The five-star reviews paint a beautiful taste palate. “They are really good and taste like caramel than pecan pie,” one person said. “Bought this a second time,” another writes. “First bag was gone too soon.”

The one-star reviews portray an entirely different snack. (Cue thunder, lightning, general retching noises.) “These did not really taste at all like pecan pie,” one reviewer writes. “They were overly sweet and, by far, they tasted like chocolate; the cloying sweetness of pecan pie was there, but not the nutty taste.” Not just sweetness, CLOYING sweetness. That is my new favorite poem.

Other one-star reviews say they taste “like maple syrup in coffee” and “Calling these "Pecan Pie" is a gross mistake.” One person wrote “they smell like rancid nuts,” adding that they dumped them into a big bowl to “let them air out.” The imagery! The audacity! The rancid nuts!!!

This three-star review seems to paint the most objective picture: “They do not taste like pecan pie and it is very hard to describe what they taste like. We tasted chocolate, caramel, malt(like for malted milk or malted milk balls) and a small hint coffee flavor. They were super sweet and left a sweet aftertaste but we can't figure out what it is.”

If you aren’t able to get your hands on the Pecan Pie M&M’s or you don’t want to take your chances on tainting the idea of actual pecan pie forever, fear not: there are M&M’s options for you yet. There are Hazlenut Spread M&M’s, which are essentially Nutella M&M’s. Unless two rights make a wrong, I’m not sure how those could be anything other than delicious. There are the soon-to-come Fudge Brownie M&M’s which M&M’s teased in an Instagram post claiming “it’ll be worth the wait.” Other new seasonal M&M’s have already hit stores like M&M’s Creepy Cocoa Crisp. They’re described on the packaging as M&M’s with a “crisp cocoa center” and “a layer of dark chocolate.” If you like Crispy M&M’s and dark chocolate, those seem like a solid option for you.

Straight-up M&M’s not really your thing? Well, you’ve got options as well. There’s M&M’s Minis Cookie Dough which is exactly what it sounds like: cookie dough stuffed with mini M&M’s. They’re ideal for when you can’t choose between cookies and candy and just want both, in your mouth, ASAP. M&M’s also recently released M&M’s chocolate bars in four different varieties: Chocolate, Crispy, Hazlenut, and Peanut. Again, why choose between desserts when you can have both at once.