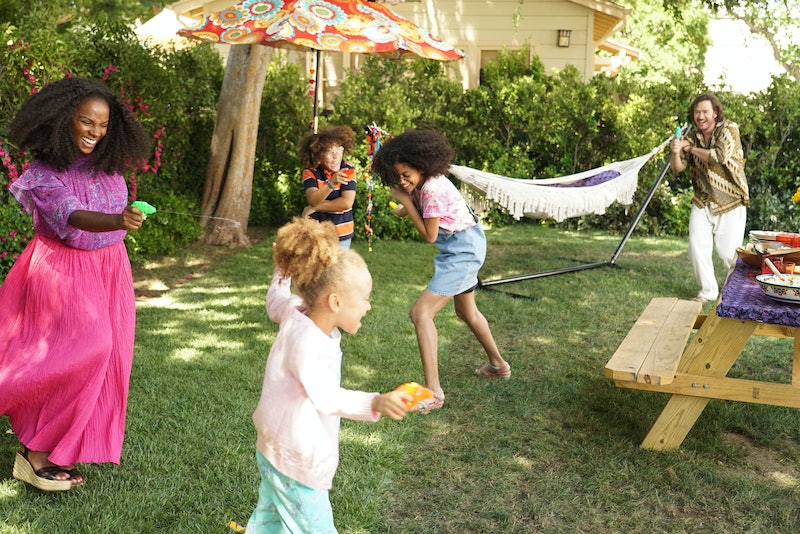 When you get the chance to have Mariah Carey sing your TV show's theme song, you absolutely go for it. But beyond the icon's singing chops and star power, Carey's mixed-ish theme song "In the Mix" is special because it's so personal for her. Carey previously spoke about how she wanted to do the theme for ABC's mixed-ish based on her own experiences as a biracial person. She even made the song a family affair with her two children, Moroccan and Monroe, joining in the music video. With Carey's joyful lyrics and message of unity, "In the Mix" is a celebration of the multiracial experience.

Just like grown-ish, mixed-ish is a spinoff of Kenya Barris' black-ish. But this time around, the series goes back in time to the '80s to follow Tracee Ellis Ross' Rainbow Johnson growing up in a biracial family with a white father (Mark-Paul Gosselaar) and a black mother (Tika Sumpter). Fans of black-ish know that Bow's childhood experiences are pretty uncommon since she was raised in a commune before moving to the suburbs. But Arica Himmel's young Bow feeling like she doesn't fit in is, unfortunately, more universal.

However, Carey's song is all about celebrating the uniqueness of people with multiracial backgrounds. Carey knows firsthand the struggles a multiracial person can experience, since she's spoken about it in the past, but she's focused on the positive for "In the Mix" and the song really is a party as Carey, Moroccan, Monroe sing, "Yaaay us!"

While Bow and her younger siblings Johan and Santamonica try to fit in at their new school in footage from the show, Carey sings, "Oh, they keep trying, but they can't stop us / 'Cause we got a love that keeps rising up / And yeah they fight it but we just proceed / To be who we are baby, you and me." The Johnsons don't feel like they have a place to sit in the cafeteria in the mixed-ish clip, but Carey notes how they don't need to be put in a specific box or defined. "We keep it inspiring even though they set limits for us to follow," she sings. "We stayin' strong now with superpowers."

Carey said in a statement about the song that she's a fan of black-ish and grown-ish and reached out to Barris about working on something together. "As a biracial woman in the entertainment industry, there was no way I did not want to be a part of mixed-ish, especially after seeing the pilot, which I loved," Carey said. "I could not be more honored and proud to be writing and performing 'In the Mix' for Kenya and the show."

As mentioned, the "Heartbreaker" singer brought the personal nature of the song to the forefront in the video by incorporating not only one of her beloved dogs, but her two children with Nick Cannon, 8-year-old twins Monroe and Morocco. They appear to be having a blast as they sing with their mom. And this loving family reflects what viewers will see with Bow's family when mixed-ish premieres on Tuesday, Sept. 24. After all, as Carey sings in the chorus, "In the mix, we gonna get by / On our own, side by side / Love's all we need to be free / I got you, you got me."

"In the Mix" has all of the bouncy vibes and high-octave runs and trills that Carey became famous for in the '90s. But she might even offer more than her vocals to mixed-ish in the future. Entertainment Weekly reported that at ABC's Television Critics Association summer presentation in August, mixed-ish showrunner Karin Gist teased that Carey might even pop up on the show. While fans will have to wait to see if that happens, they can listen to "In The Mix" on repeat in the meantime.