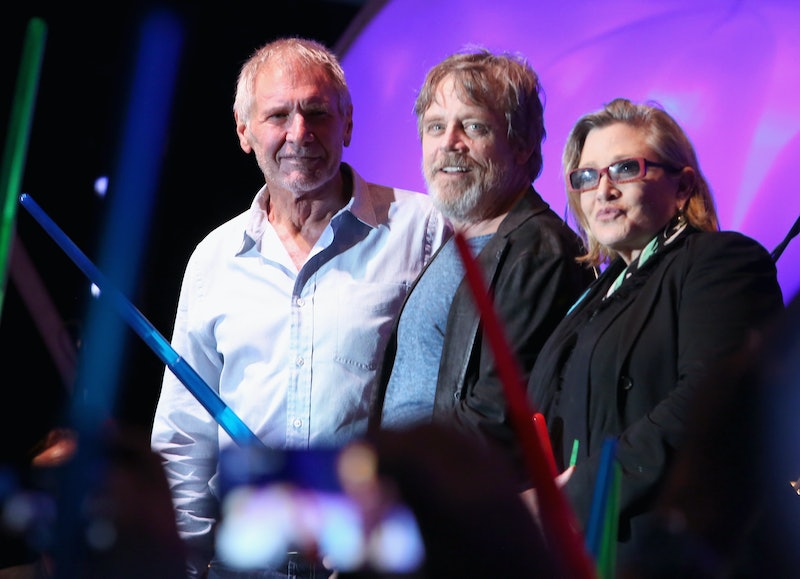 I'm not trying to throw shade, but Mark Hamill's idea for The Force Awakens' ending is better than what the filmmakers actually went with. And that's coming from someone who actually really loved Episode VII, so you know it's more about how good Hamill's idea is than any slight to the film. The 65-year old actor'sVanity Fair interview, paired with their release of new The Last Jedi photos, helps prove his OG Star Wars status. In the interview, released Wednesday, Hamill shared his disappointment that his character was only revealed in the movie's final shot. At first, it seems like he's bummed because he completely adjusted his diet to get in shape for one scene. But as he continues, it becomes clear that the actor is more interested in serving the storyline than his own needs.

Hamill said he was hoping that his character Luke Skywalker would crop up earlier than he did, specifically in Han Solo's death scene. And not even hoping, really — assuming is probably the better word for it. That's how much sense an earlier appearance made in Hamill's head. And you know what? He's not wrong. As he told Vanity Fair,

"Now, remember, one of the plots in the earlier films was the telepathic communication between my sister and me. So I thought, Carrie [Fisher, who played Leia] will sense that Han is in danger and try to contact me. And she won’t succeed, and, in frustration, she’ll go herself. Then we’re in the situation where all three of us are together, which is one of my favorite things in the original film, when we were on the Death Star. It’s just got a fun dynamic to it. "

Um, yeah, now that you've put this idea in my head, I can't un-think it. And I'm honestly a little bummed that the film didn't go in that direction. Obviously there's a lot of cinematic power and weight to revealing Skywalker at the last minute, in the final scene. So I do understand why director J.J. Abrams did so, and so does Hamill.

But the realization that the franchise missed the opportunity to reunite three of its biggest power players in one scene is a punch in the gut, especially after Fisher's abrupt and tragic death last year. But thankfully, fans' imaginations are still alive and well, and Hamill paints quite the picture of what could have been. He told VF,

"So I thought it would have been more effective, and I still feel this way, though it’s just my opinion, that Leia would make it as far as she can, and, right when she is apprehended, maybe even facing death—Ba-boom! I come in and blow the guy away and the two of us go to where Han is facing off with his son, but we’re too late."

Can't you just see it? It makes my stomach hurt just imagining it, and Hamill explained that part too. He continued,

"The reason that’s important is that we witness his death, which carries enormous personal resonance into the next picture. As it is, Chewie’s there, and how much can you get out of [passable Chewbacca wail] ‘Nyaaarghhh!’ and two people who have known Han for, what, 20 minutes?"

This. Is. Blowing. My. Mind. But I guess I shouldn't be surprised at this level of insight from someone who's been so intimately involved with the franchise for so long. Hamill's first appearance as Luke Skywalker was in Episode IV: A New Hope, released in 1977.

So Hamill has had literally four decades of Star Wars immersion, making him probably one of the foremost experts. I'm sure Rian Johnson will do a great job directing The Last Jedi, but I have my fingers crossed that he lets himself be influenced by Hamill as well. The actor knows what he's talking about, and if filmmakers had taken his advice with The Force Awakens, it would've improved the film.

It would've deepened the impact of Han Solo's death, informed Leia and Luke's characters going forward, and given fans a priceless opportunity to see all three originals reunited. Hindsight is 20/20, but let's not let a moment like this pass by again.