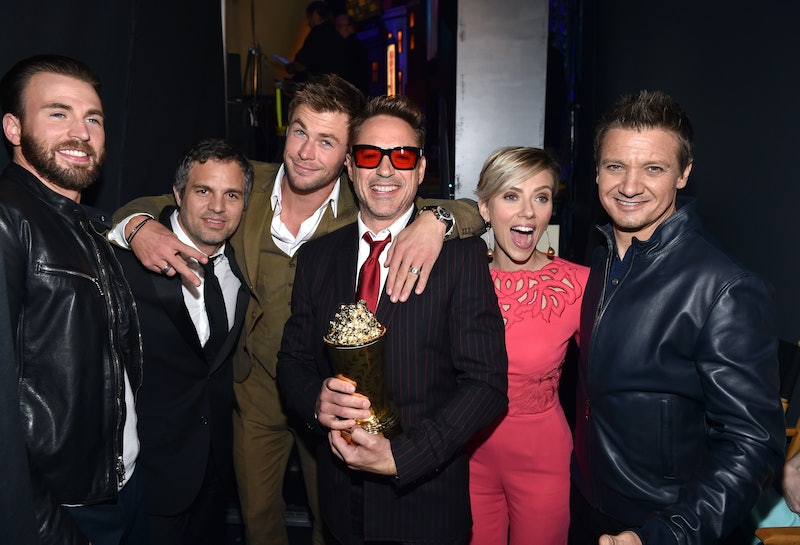 Now that they've successfully defeated Thanos, the Avengers have their sights set on conquering the Academy Awards. Disney is submitting 13 Avengers: Endgame stars for Oscars consideration, and despite having some big names in the cast, every single actor is being submitted in the Supporting Actor categories. According to the Walt Disney Studios Awards website, it is submitting Endgame for consideration at the 2020 awards in multiple categories, along with its new animated releases, Toy Story 4 and Frozen 2, and live-action adaptations of Aladdin and The Lion King.

In addition to submitting the superhero movie for Best Picture consideration, Disney lists 8 Best Supporting Actors contenders, including film leads Robert Downey Jr., Chris Evans, and Chris Hemsworth, as well as Paul Rudd, Jeremy Renner, Don Cheadle, and Josh Brolin. Interestingly, Tom Holland is not being submitted for consideration, despite playing one the most iconic characters in the Marvel Cinematic Universe, and having one of the most emotional moments in the film, reuniting with Tony Stark moments before his death.

The studio is also submitting five female Endgame stars for consideration in the Best Supporting Actress category, including Scarlett Johansson, whose Black Widow had arguably the most significant role to play in the movie. Gywneth Paltrow, Zoe Saldana, and Karen Gillan are also listed as submissions, as is Brie Larson, despite the fact that Captain Marvel only appears in a handful of scenes in the movie.

In addition to Best Picture and multiple acting categories, Disney is also asking for Endgame to be considered for several technical categories, including Best Adapted Screenplay, Best Visual Effects, and Best Costume Design.

Superhero movies — and the MCU in particular — tend to fare the best at the Oscars when it comes to the technical categories, earning just 10 nominations since the MCU began in 2008. However, Marvel didn't win any Oscars until 2019, when Ruth Carter and Hannah Beachler became the first black women to win the Best Costume Design and Best Production Design awards, respectively, for Black Panther, and Ludwig Göransson won for Best Original Score.

Disney's push for Endgame to be considered for its acting and cinematic achievements comes in the wake of Oscar winning-director Martin Scorsese's comments that Marvel movies are "not cinema." In an October interview with Empire magazine, the director compared the superhero films to "theme parks," though he acknowledged that audiences flock to them. "It isn’t the cinema of human beings trying to convey emotional, psychological experiences to another human being," Scorsese told the outlet. A month later, he clarified his comments in an op-ed for the New York Times, in which Scorsese said that he felt big franchise films lacked "revelation" and characters with "complexity," which is what he feels cinema is all about.

Though Scorsese's comments earned some support from fellow director Francis Ford Coppola, several actors and directors involved in the MCU refuted his claims, and shared their support for Marvel movies. "I think there's room for all types of cinema," Natalie Portman — who won an Oscar in 2011 and will reprise her role as Jane Foster for Marvel's Thor: Love and Thunder — told the Hollywood Reporter in October. "There's not one way to make art."

Fans of the MCU will have to wait until the 2020 Oscar nominees are announced in January to find out which side of the debate the Academy falls on. Still, if Hollywood does choose to nominate some of the star-studded cast for Best Supporting Actor or Actress, they will have plenty of big names to choose from Disney's list.

More like this
Twitter Is Overjoyed By Angela Bassett’s Record-Making Oscar Nomination
By Maxine Harrison
Kukulkan From 'Wakanda Forever' Has A Surprising Connection To Marvel History
By Grace Wehniainen
Anne Hathaway Shared A "Thrilling" 'Princess Diaries 3' Update
By Darshita Goyal
Netflix Shut Down 'Bridgerton' S3 Rumours About A “Very Dark” Storyline
By Bustle
Get Even More From Bustle — Sign Up For The Newsletter
From hair trends to relationship advice, our daily newsletter has everything you need to sound like a person who’s on TikTok, even if you aren’t.