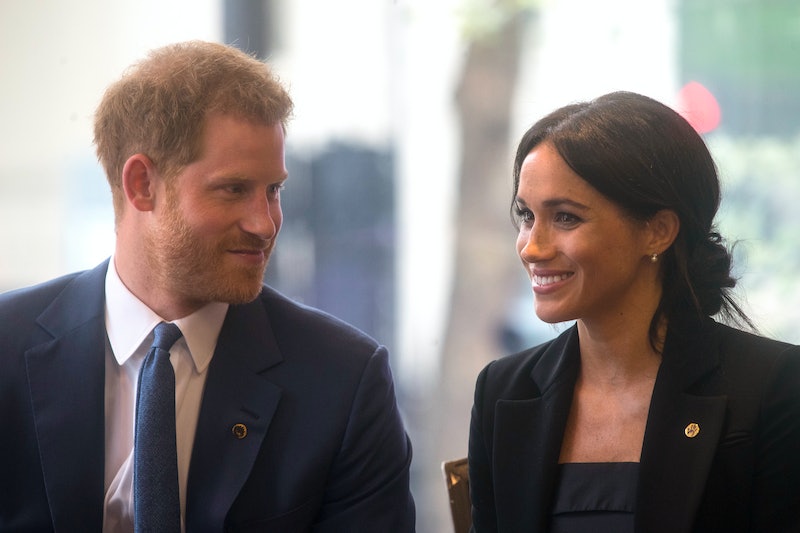 The meeting of everyone's dreams apparently took place recently. According to Cosmopolitan, Meghan Markle and Prince Harry reportedly hung out with Adele on Thursday, Dec. 20. Naturally, this gathering involved a cause that is near and dear to the Duchess of Sussex.

According to royal commentator Omid Scobie, Adele visited the Hubb Community Kitchen, where she posed for a photo with the Hubb's co-founder, Munira Mahmoud. In case you weren't already aware, Markle has worked incredibly close with the organization, which is a communal kitchen at the Al Manaar Centre in West London, in recent months. Scobie went on to tweet that the Duke and Duchess of Sussex also paid a low-key visit to the Hubb that day. Although, they were not pictured at the event, as it was reportedly not an official engagement for the royal couple.

Since both Adele and the newlywed royals both visited the organization on the same day, as People also reported, it stands to reason that they likely met up during the event. That means there could've been a get-together between legends that went completely under-the radar. It's especially cool to hear that this could have taken place at the Hubb Community Kitchen, as it's clearly an organization that's close to Markle's heart.

According to Cosmopolitan, Markle has been making frequent visits to the Hubb — which is comprised of many women who were affected by the tragic 2017 Grenfell Tower Fire in London — lately, both in official and unofficial fashion. The last official visit the Duchess made was actually incredibly recent.

On Nov. 21, she got in on the Thanksgiving spirit by visiting the organization in London, and showed that she still has strong ties to her American roots in the process. People reported that she made a visit to the Hubb, where she helped make and package around 300 meals that would be distributed to those in need.

Markle made her first public visit to the Hubb back in September, when she visited with her husband, Harry, and her mother, Doria Ragland, who made an exciting and trendsetting appearance at her daughter's engagement.

Not only did the three get to enjoy some delicious dishes made by women from the Hubb Community Kitchen, their visit also served to help launch a cookbook called Together: Our Community Cookbook, Markle's first solo charity project. In her forward for the book, the Duchess described exactly why she feels such a strong connection to the organization, writing:

"I immediately felt connected to this community kitchen; it is a place for women to laugh, grieve, cry and cook together. Melding cultural identities under a shared roof, it creates a space to feel a sense of normalcy – in its simplest form, the universal need to connect, nurture and commune through food, through crisis or joy – something we can all relate to."

It's amazing to see all of the hard work that the Duchess of Sussex has already done when it comes to her first solo charity project. Based on a recent report featuring a superstar's latest visit to the Hubb, it's entirely possible that Markle and Adele got to bond over their shared dedication to supporting such an important organization.