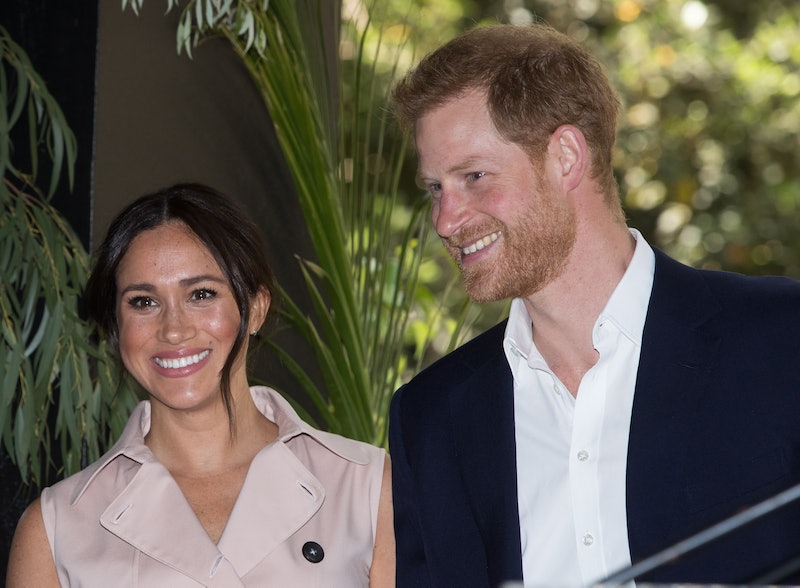 Archie's first Christmas won't include his great-grandmother. That's because Meghan Markle and Prince Harry aren't spending Christmas with the Queen this year. Instead of spending the holidays with the rest of the royal family, the Duke and Duchess of Sussex have chosen to do something a little more low key in 2019. And according to Buckingham Palace, the Queen approves.

Most years, the royals spend their Christmas in Sandringham, the Queen's country retreat in Norfolk, England. That's where Prince Harry and Markle have spent their last two Christmases — the first being in 2017 shortly after they announced their engagement. But, they "are looking forward to extended family time towards the end of this month" this year around, a statement from Buckingham Palace reads, per People. "Their Royal Highnesses will spend the holiday this year, as a new family, with the Duchess’ mother Doria Ragland."

While it is unclear where Prince Harry and Markle will be spending their Christmas, People reports that it will not be in Los Angeles, where Ragland lives. However, it's worth noting that Buckingham Palace's statement did make it clear that "this decision is in line with precedent set previously by other members of the Royal Family, and has the support of Her Majesty The Queen.”

In 2016, Prince William and Kate Middleton also skipped the royal Christmas to spend it with Middleton's family in her hometown of Buckleberry. The couple, along with their three children — Prince George, Princess Charlotte, and Prince Louis — are expected to be at the Sandringham estate this Christmas.

Prince Harry and Markle previously announced that they would be taking some time off this holiday season. The Duke and Duchess will take a six-week sabbatical for some "much-needed family time" toward the end of this year, according to a royal source per People. During this time, they are expected to visit the U.S., which will mark Archie’s first trip to his mother’s home country.

Prince Harry and Markle's decision to forgo the royal family festivities comes after comments the royal made about his relationship with Prince William. “The majority of stuff is created out of nothing," Prince Harry said in an ITV documentary, Harry & Meghan: An African Journey about rumors he's feuding with William. "As brothers, we have good days and we have bad days.” Prince Harry went on to say that he and his brother "are certainly on different paths at the moment. I’ll always be there for him and as I know, he’ll always be there for me."

This Christmas, the brothers won't be there for each other in person, but it appears it's only because Prince Harry and Markle are looking for a little peace and quiet this holiday season. Perhaps, these royals really are just like us.

More like this
Prince Harry & Meghan Markle Are Puppets Now
By Sam Ramsden
Everything To Know About 'And Just Like That...' Season 2
By Jack Irvin and Grace Wehniainen
The 2023 Super Bowl Commercials Feature A 'Breaking Bad' Reunion & Missy Elliott
By Alyssa Lapid
Harry Styles Had A Major Stage Malfunction At The Grammys
By Darshita Goyal
Get Even More From Bustle — Sign Up For The Newsletter
From hair trends to relationship advice, our daily newsletter has everything you need to sound like a person who’s on TikTok, even if you aren’t.