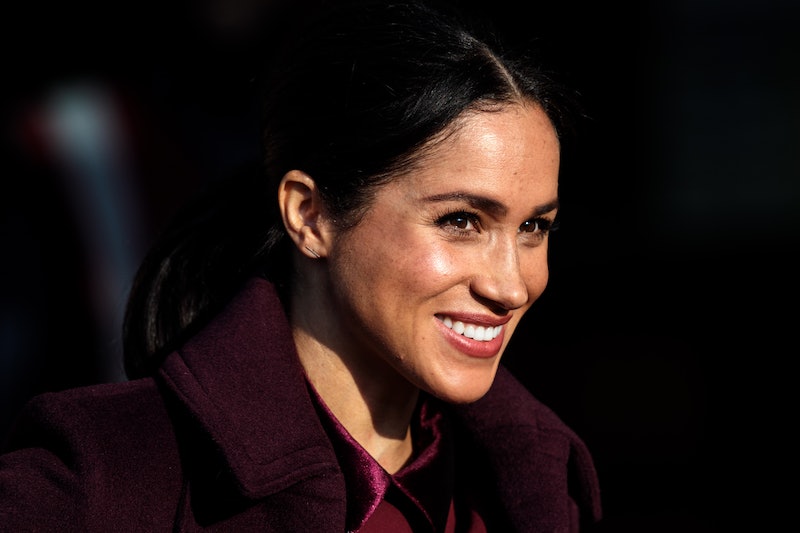 Sometimes a good dress is just a good dress, and while you may think that the royal family doesn't appreciate a dress's longevity given that the fashion world is at their disposal, you'd be wrong. In fact, Meghan Markle rewore a dress from 2016, and it proves that just because you're royalty, it doesn't mean you can't repeat a look.

According to website What Meghan Wore, the Duchess of Sussex attended a Christmas lunch with her grandmother-in-law the Queen for extended family members. While cameras weren't inside the lunch, photos were snapped of Markle and husband Prince Harry as they arrived. With such limited photography, you'd like it would be impossible to identify the dress, but What Meghan Wore has done it, and it turns out that not only did Markle wear the dress in 2016, but she actually wore it on a Today Show appearance.

According to the site, Markle is wearing a ruffled Erdem dress in a purple, green, and gold floral print with sheer sleeves. The frock was identified thanks to that print and the ruffled neck that's visible in the images of their arrival at Buckingham Palace. Apparently royals are just like us and know when a dress is just too good to retire.

Given that the dress is from 2016, it's obviously no longer available. One of the coolest things about the dress, though, may be that it would have more than likely come from the duchess's personal closet before she ever became royalty. Despite access to incredible designers and fashions, she kept some of her own wardrobe.

It's not just that Markle kept the dress after her transition to royalty. She also wore it on national television when she appeared on the Today Show to discuss winter fashion trends.

Of course, this is far from the first time Markle or another member of the royal family has reworn a dress. In fact, just recently, Markle's sister-in-law Kate Middleton rewore a dress that was also a few years old.

Recently, Middleton attended the 2018 Tusk Conservation Awards and rewore a gorgeous turquoise Jenny Packham dress that she wore all the way back in 2012! Despite the fact that the dress is six year old, it looks as good as ever on Middleton.

Of course, Markle herself isn't a stranger to a rewear. While on a royal tour in Australia (and right after announcing her pregnancy), the Duchess rewore the Antonio Bardi dress that she donned for her first public appearance with Prince Harry. The navy, double breasted dress midi dress is a classic and looked great on Markle both before and during her pregnancy.

While non-royals may not exactly have access to the high-end items that Markle or Middleton choose to rewear, their decisions are proof that when you love something, keep wearing it. Despite being members of the royal family with unlimited access to the world of fashion, it seems that sometimes everyone just needs an old standby, especially when that standby is Jenny Packham or Erdem.