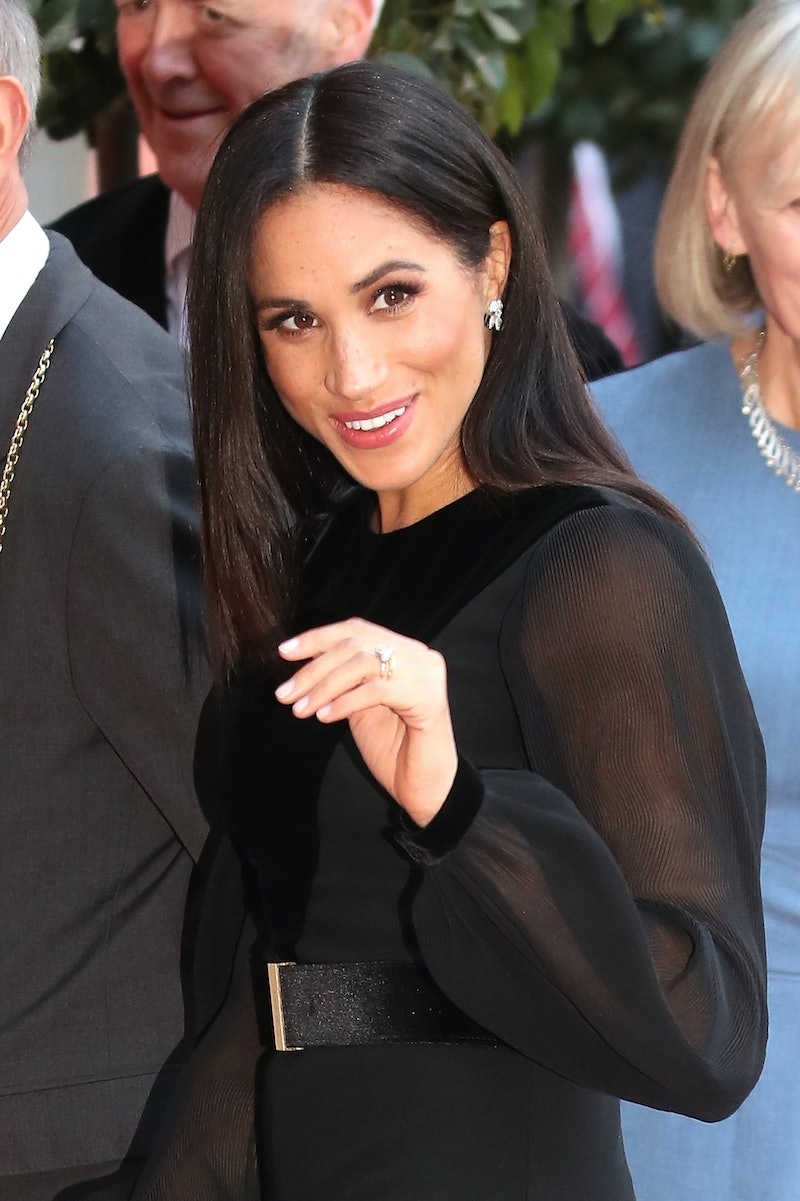 Meghan Markle is on a style roll. From her new hair style to a rocking a blazer as a dress, she's been crushing it lately. Honestly, though, when is she not a total style rockstar. Now, she's done it again, and Meghan Markle's black dress for her first solo outing is going to give you some serious Princess Diana vibes.

Unlike many members of the royal family, Markle seems to wear black quite often. She's worn it earlier this month when she broke fashion rules by pairing a black dress with a beautiful blue coat, and during a performance of Hamilton to benefit Prince Harry's charity Sentebale, she again wore black in the form of a blazer dress. For her first solo outing, she chose to wear black again, this time in the form of a velvet little black dress.

If a little black dress made of velvet sounds familiar, it's because her late mother-in-law Princess Diana has an iconic LBD that many called her "revenge dress." While Markle's frock is much more demure than Diana's gorgeous cocktail dress, it's hard to think of Princess Diana any time you see one of the female members of the royal family wearing the color.

According to Who What Wear, Markle was at the Royal Academy of Arts to open the new "Oceania" exhibit. For the solo event, Markle wore a design from Givenchy, a name that will sound familiar to fans of the Duchess of Sussex. For her wedding to Prince Harry, Givenchy Artistic Director Clare Waight Keller designed her wedding gown, and she's worn the house since her big day as well. Markle isn't just wearing a familiar designer, though. Who What Wear also reports that she's re-wearing the Aquazzura heels and noted that she's actually been wearing them frequently over the past several months. Honestly, they're so cute, so it's not hard to see why she's re-wear them.

The dress has more similarities to Princess Diana's than just the color, though. The velvet neckline of Markle's dress mirrors the fabric of Diana's and its placement as a plunging piece at her neck reflects the deep sweetheart neckline of Prince Harry's late mother's gown.

While Markle's dress may not be directly analogous to Princess Diana's and is for a different, more formal occasion, the Duchess of Sussex wearing items inspired by or directly from the late princess isn't exactly hard to believe. In fact, for her own wedding reception, Markle chose to wear Princess Diana's aquamarine ring on her finger. Plus, Markle's engagement ring, designed by Prince Harry himself, features a diamond from his late mother's own collection. Of course, there have been an ample number of style moments where Markle has mimicked Princess Diana's fashions.

Whether you see the connection between Meghan Markle's little black dress and Princess Diana's, it's still hard to deny that the royal family are still impacted by her life and her style. Whether it's a ring or a charitable contribution, seeing Princess Diana's legacy live on is heartwarming even if it is just a dress.