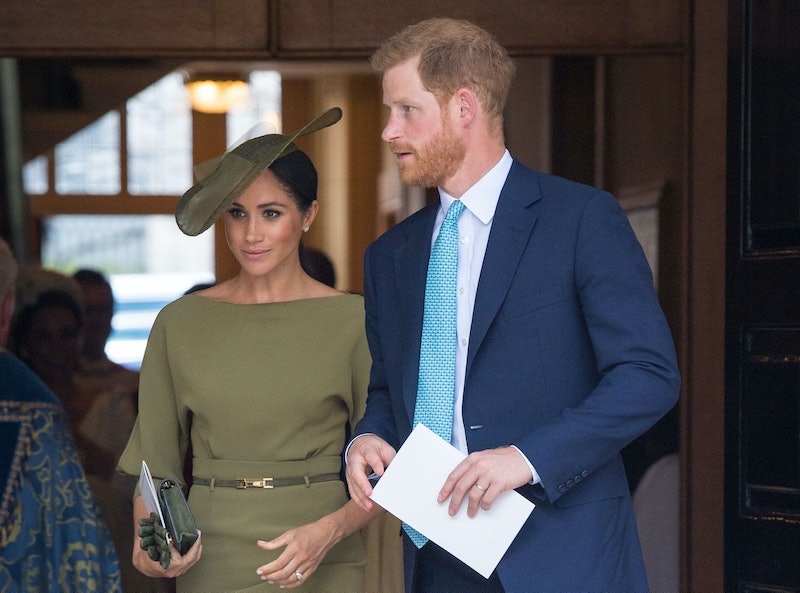 I honestly can't keep up with the amount of royal events happening this year. The nation has celebrated the wedding of Prince Harry and Meghan Markle and the birth of baby Prince Louis — and we're only in July. Monday marks another special occasion as the 11-week-old royal was christened. Obviously, I was scouring social media to see the first glimpse of Meghan Markle's christening outfit.

The Duchess of Sussex attended the christening at the Chapel Royal at St James's Palace. She arrived alongside her husband, wearing a fitted olive green dress by Ralph Lauren — featuring a boat neckline and belt — and dramatic hat by favoured milliner Stephen Jones, reports Town & Country. On her feet were a pair of matching suede dark green heels by Manolo Blahnik, reports Harpers Bazaar. Unfortunately, these are already sold out. Sigh. She was also carrying a pair of olive green gloves and a matching bag, suggesting she's really following the Queen's lead in an 'all matching everything' colour-blocked look (though she arguably took it one step further, as Her Majesty tends to keep her shoes and handbag black).

Markle has been championing American brands, and colours other than pink, over the past few days. On Thursday night, she stepped out in a bright yellow dress by US designer Brandon Maxwell. Although much more subdued in colour, Monday's outfit, too, is by a traditionally American label — albeit one that is much more universally known. While there are currently no shots available of her hair from the back, it appears that she opted for a low, straight and sleek ponytail, suggesting the age of the messy bun might be well and truly behind us. Sob.

Her neutral colour choice was perfect for a day where she was not positioned front and centre. Hanging firmly in the background, she let Prince William, Kate Middleton, and their children take centre stage.

While Markle took a step back, the Duchess of Cambridge stood out in her much-loved Alexander McQueen, wearing a long-sleeved cream dress by the British brand, reports MailOnline. Her matching hat — which was more like a well-adorned headband — was designed by another of the royal family's favourites, Jane Taylor. Nude heels by Jimmy Choo topped off the formal look.

As is the case with many royal christenings, today's was an intimate affair. The Duke and Duchess of Cambridge were of course there with their children, Prince George and Princess Charlotte. Meanwhile, Prince Charles and Camilla also turned up along with Kate Middleton's parents, Carole and Michael, sister Pippa, her husband James Matthews, and brother James.

The Queen and Prince Philip were noticeably absent. Despite rumours circulating that the reason for this was because of ill health, Buckingham Palace stated that the decision not to attend had been made "some time ago." The pair had previously attended the christenings of both Prince George and Princess Charlotte, so it's a shame they weren't able to make today, but I'm sure the rest of the family being there more than made up for their absence.

The christening also involved rumours about who would be named Prince Louis' godparents. While Markle's name was in the running, she wasn't chosen this time round. Instead, a mixture of six of William and Kate's close friends (and a cousin) were picked.

Weirdly enough, Markle reportedly experienced the very same ceremony in the very same chapel only a few months ago. She, too, was christened by the Archbishop of Canterbury in front of a few select members of the royal family.

Following the baptism, the christening guests will enjoy a private tea over at Clarence House. They will each be served a slice of cake cut from the Duke and Duchess of Cambridge's very own wedding cake. Who knew they'd have kept it for that long?

And if you're keen to see what Markle wears next, prepare yourselves for her very first royal tour which will take place in Dublin on Tuesday and Wednesday this week. Judging by the fact royals often sport the colours of the country they are visiting, I have a feeling this won't be the last time we're seeing Markle in green this week.