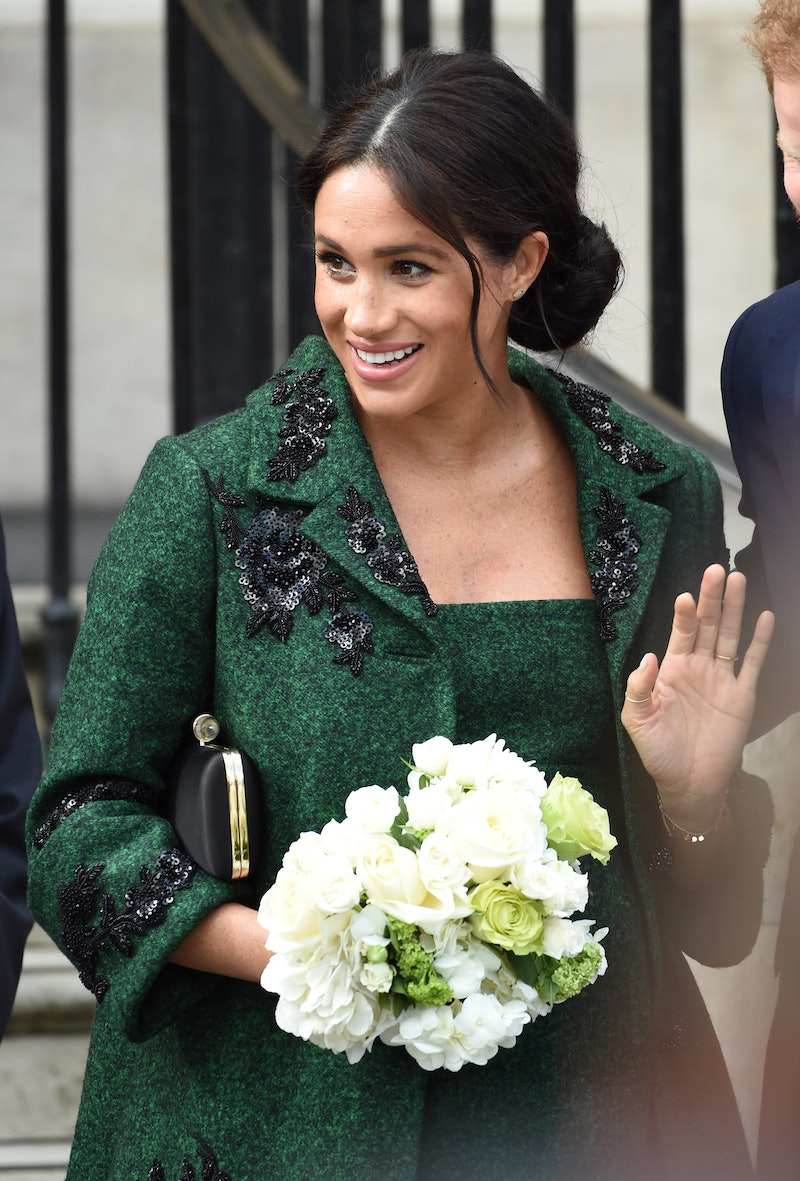 The Duke and Duchess of Sussex's baby is almost here! Meghan Markle's baby is due in late April, as confirmed by the woman herself. After the new royal family member arrives, the Duchess will get to take some time off from her official engagements, but there is a way to guess when Meghan Markle will return for her first post-baby appearance. (Well, other than appearing outside the hospital with the baby, if she chooses to go that route.) The royal family calendar has some key dates each year, and there's one event that should be conveniently timed for Markle to pop back out into the public eye.

Every year, Trooping the Colour, a military parade in honor of the Queen's birthday, takes place in June. This year, it will be held on Saturday, June 8. Outside of what happens at the actual parade, fans of the royal family might know this as the event where everyone stands on the balcony of Buckingham Palace and looks up at the sky. (They're looking at a flypast from the Royal Air Force.)

It would make sense for this event to mark a return for Markle, because of the timing and because she wouldn't have to actually do that much to participate. Trooping the Colour will take place about a month and a half after Markle gives birth, which seems like enough time to feel like doing something that isn't non-stop baby all the time. But, it's also not that long, so you might not want to do something that involves very much effort. (Like, giving a speech at one of your patronages, for example.) All she would have to do is stand on a balcony and go on a carriage ride. Of course, she will have to do this while wearing the perfect outfit, looking the exact appropriate amount of happy,and being sure to not accidentally give the Duchess of Cambridge the side eye, because the world will be critiquing all of that. No matter what she does, it's not going to be 100 percent stress-free.

But, if Markle doesn't attend Trooping the Colour, there are some other events this summer where she could make her grand return. The horse race Royal Ascot will take place from June 18-22, so that could be an option. And if Baby Sussex's christening goes down the same way it has for the Duke and Duchess of Cambridge's children, it will probably occur in July and there will be pictures made publicly available. Markle can't exactly skip that one, so if she doesn't attend Trooping the Colour or Royal Ascot, this is a safe bet.

While Trooping the Color could be Markle's return to being seen by the public, she probably won't officially return to work until the fall. Last year, Middleton took six months maternity leave and returned on October 2 when she visited the Sayers Croft Forest School and Wildlife Garden and talked to children about enjoying the great outdoors. Markle will likely take the same amount of time off. Harper's Bazaar reports that it's traditional for royal mothers to take six months off of their official engagements.

According to People, as of March 14, Markle was not yet officially on maternity leave, but easing into things. A source told the magazine, "There are plenty of private meetings taking place. If she is to do something public it would be announced, but there are none that are scheduled." Still, it won't be long now until the new baby is here, we find out their name, and fans start getting antsy for Markle to show up at events once again.