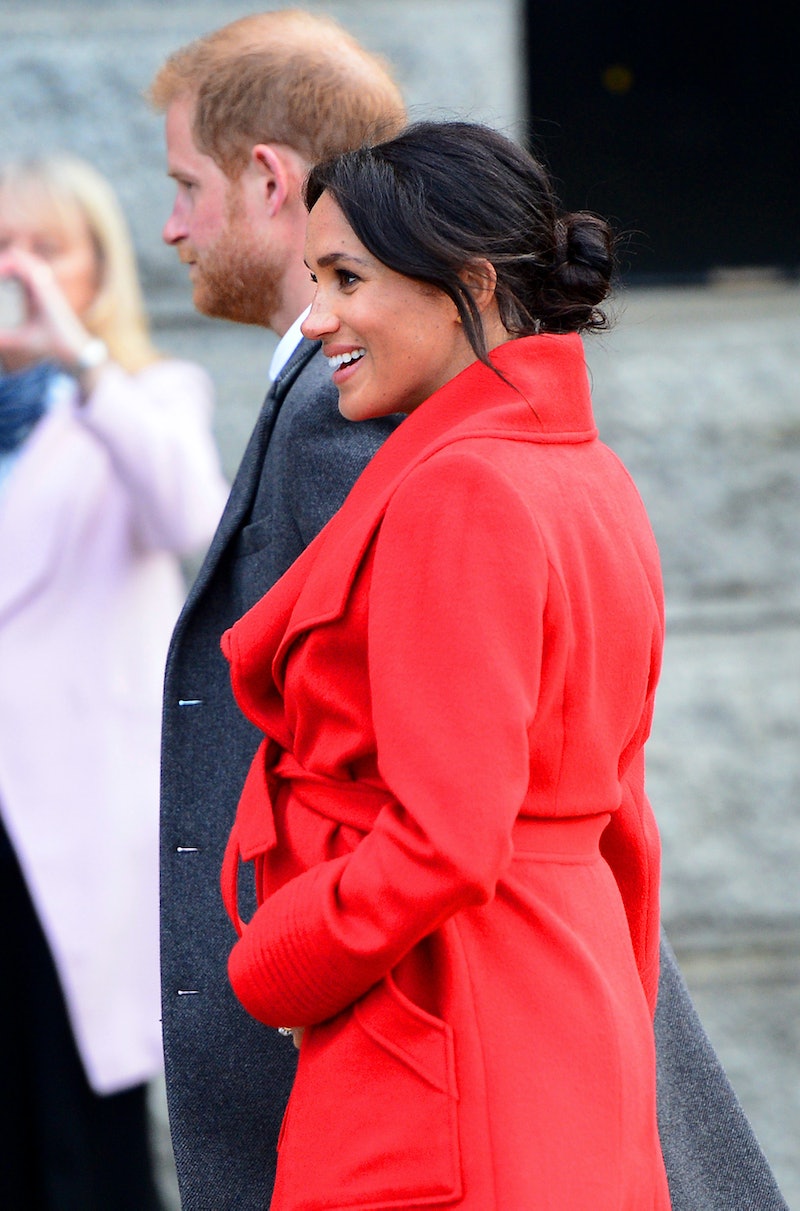 Monday may be here, but thanks to the Duchess of Sussex, the day is looking quite a bit brighter. Meghan Markle's red coat and purple dress combo spiced up this Monday with some vibrant colors, and while the two colors may not sound like they'd work together, they totally do. In fact, even Markle's shoes were red to go with the bright fashions. While the contrasting colors may have stolen the fashion show, there was one little detail that fans may have missed. Markle has actually worn this coat before in a different color.

According to InStyle, Markle and her husband Prince Harry were on their first royal outing together to view the new Wilfred Owen statue, an art piece dedicated to the World War I war-time poet. While Markle typically chooses to wear neutral tones, she stepped out wearing some serious color in a purple Aritzia midi dress that retails for only $138 — sorry fashion fans, it's already sold out — and a bold red Sentaler coat. If the name of that coat sounds familiar, there's a very good reason why. Markle has actually worn it before to an official royal outing.

As it turns out, the red Sentaler coat is the same one Markle wore to Christmas Mass in 2017 before she married Prince Harry. At the time, the soon-to-be Duchess of Sussex wore a beautiful cream version of the coat with camel colored Stuart Weitzman boots as well as camel gloves and matching fascinator. The look was elegant and understated making it perfect for her first Christmas with the royal family.

Now, however, as an official member of the British royal family, Markle seems a bit more daring with her style. After all, she did wear a Reformation maxi dress in Australia that featured a daring slit, and who could forget dark nail polish gate at the British Fashion Awards? While there doesn't seem to be a rule about wearing too much color, the coat and dress combination were certainly different than what royal fashion fans have seen on the duchess before.

According to Sentaler, the coat's red hue is new from their Fall/Winter 2019/2020 collection, and it seems that Markle loved the original cream coat so much that she wanted it in red, too.

The Sentaler coat is far from Markle's first rewear, though. Like her sister-in-law Kate Middleton, the Duchess of Sussex seems to have a few favorite brands and pieces in her wardrobe that she's not afraid to wear more than once. In fact, Sentaler is not the only coat brand she's reworn.

Back in January of 2018, Markle wore a classic black Stella McCartney coat with a silk tie waist. Apparently, she loved it so much, that she wore it again in November for the Festival of Remembrance.

Meghan Markle certainly seems to have some brand favorites in her wardrobe, and with such amazing fashions at her fingertips, you know she clearly cares for a brand if she's choosing to rewear them. Markle's red Senaler coat is just another in her line of rewears because as it turns out, maybe royals are more like us than you thought.