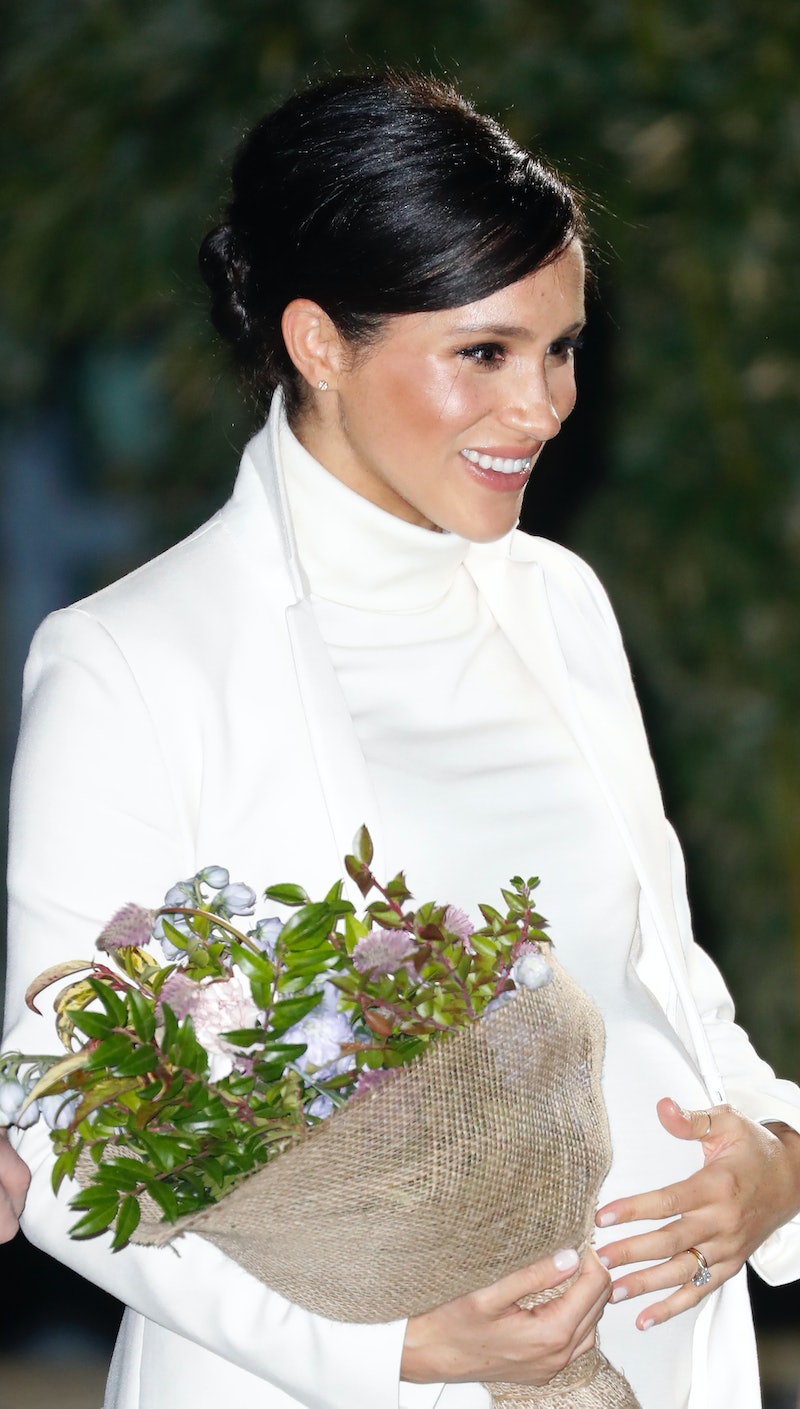 The royal family has access to, well, pretty much anything, and that includes clothings. From bespoke Givenchy to custom altered pieces, both the Duchess of Cambridge and Sussex have fashion at their fingertips. However, Meghan Markle's white dress at The Wider Earth performance was accessorized solely with pieces she's already worn before. Yes, really. Honestly, it's just proof that if you love something, there's no need to let it go, and maybe, just maybe duchesses are more like us than you though.

On Tuesday, Meghan Markle and Prince Harry attended a performance of The Wider Earth as a celebration of Charles Darwin's 210 birthday. The gala performance was also in support of the Queen's Commonwealth Trust and Queens Canopy. While you may have seen Markle's ensemble and thought it was simply her typical style, there are details that you may have missed.

According to style website Meghan's Mirror, every accessory worn by the Duchess of Sussex has been worn before. From her shoes to her coat to the clutch, Markle paired her brand new dress with pieces already in her (probably overflowing) closet. The choice was clearly a good one because the expectant mother looked flawless as she headed inside to the performance.

According to the site, Markle's dress is a new piece from Calvin Klein. With a sheath silhouette and neutral color, it's definitely the Duchess's signature style. The turtleneck, however, is a bit different from her typical styles, and she looks fantastic in it. The rest of Markle's ensemble is what's taking the cake, though.

She wearing an Amanda Wakely cream coat, and if it looks familiar, that's because it's a repeat. She wore it during one of her first events as a member of the royal family. As for her shoes, they're Ralph Lauren, and she worn them to Prince Louis' christening when she donned a full-on olive green monochromatic look. Speaking of that all olive-look, that's exactly where her clutch came from as well.

Markle's decision to rewear existing pieces in her wardrobe shouldn't come as a shock to her fans. In fact, like her sister-in-law Kate Middleton, the Duchess of Sussex actually has quite the habit of repeating pieces, particularly when it comes to her accessories.

In fact, in one of her most recent outings, she rewore an accessory that every royal fashion fan would probably recognize. For her trip to the National Theatre as a new royal patron, Markle chose to don her Aquazurra Very Mathilde Suede Crisscross Pumps. They're the very same heels that she wore following she and Prince Harry's engagement and their first royal photo call.

Shoes aren't the only item Markle repeats, though. During an outing with Prince Harry back in January, the Duchess stepped out wearing a gorgeous red coat and purple dress. Of course, many focused on Markle's color choices (since she's known for her neutrals), but there was something else about the ensemble. Markle has the exact same coat in cream. She simply rewore it to the event in red.

While royal style fans may love to see Markle in brand new ensembles, her rewears as just as notable. Because maybe duchesses are more like us after all.