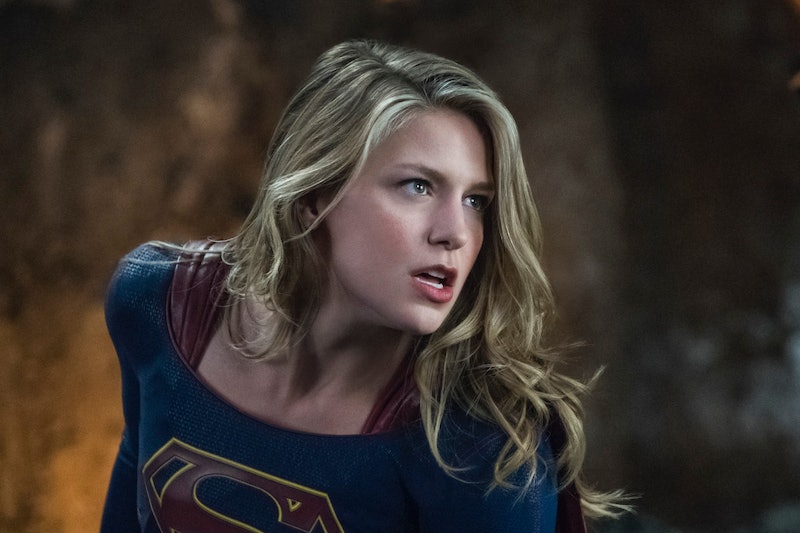 Get ready, superhero lovers — The CW is preparing to launch an epic crossover series event. On Saturday, Oct. 27, Melissa Benoist shared a photo of Supergirl and Batwoman that will have fans excited for the Arrow-verse crossover. Benoist, who stars in the CW's Supergirl, posted the instantly iconic picture with her future costar on Instagram.

The snap shows the Supergirl actor laughing in costume alongside Ruby Rose, who will play Batwoman. The photo's caption reads: "indicative of my excitement that she's here and kicking ass," with the twin dancing and woman sign emoji. According to SyFy, this year's crossover episodes titled "Elseworlds" will introduce Batwoman into the Arrow-verse ahead of her solo series on the channel.

The picture is not the first look fans have gotten at Batwoman. In early October, the CW released the first look at Rose in costume. The network also revealed the title and release date for the "Elseworlds" event, which will air from Dec. 9 to Dec. 11. The series will bring together the universes of Supergirl, Arrow, and The Flash.

Rose shared the first glimpse at the character to her own Instagram, writing: "First look Crossover event December 9 at 8pm ET," with plenty of bat and heart emojis. The character is a highly anticipated addition to the universe, and there's plenty of excitement about her arrival in the comments on the photo.

Benoist's photo on set with Rose is not the first sneak peak she has shared of the upcoming series. Last week, the Supergirl star shared a picture with Tyler Hoechlin, who has starred as Superman in the past, as well as Elizabeth Tulloch, who will join the universe as Lois Lane. The photo showed Benoist posing with her costars in front of an idyllic farm background. Benoist captioned the photo: "Two kryptonians and a journalist walk into a crossover."

In September, she also shared a behind-the-scenes look at the show with stunt coordinator Simon Burnett. The photo shows what appears to be Batwoman flipped upside down, and is captioned:

Benoist is not the only star eager for the crossover — in early October, Stephen Amell, who plays Arrow, shared a still with a few of the other heroes featured in the crossover on set. On Saturday, he shared a selfie smiling in a Flash costume, writing: "I'm really tired, but here's the crossover in a nutshell."

Of course, Ruby Rose as Kate Kane/Batwoman remains one of the most groundbreaking characters to join the universe. She will be the first openly-gay superhero to lead a TV show, and the fact that Rose is an outspoken LGBTQ advocate off screen makes the role even more exciting.

It's clear the whole cast of the Arrow-verse crossover is excited to share the series with fans, and there will likely be more social media updates before the premiere in December. Rose's Batwoman will be a history-making addition to the superhero universe, and fans are likely to be just as excited as Benoist to see her first onscreen appearance.