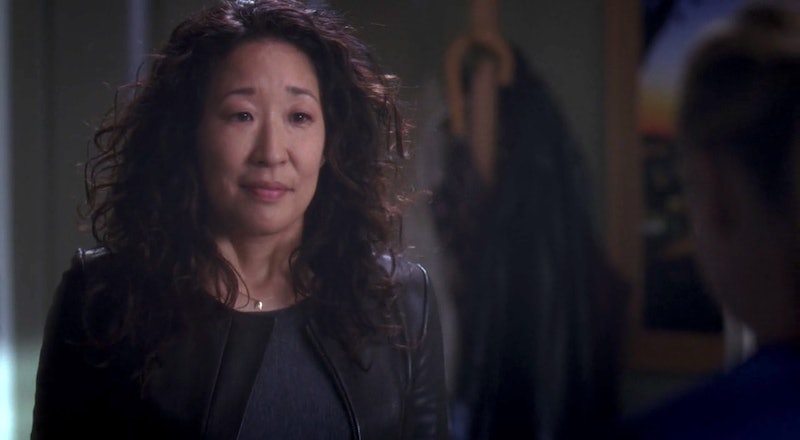 Sandra Oh's Cristina Yang hasn't been on Grey's Anatomy since the Season 10 finale when she left to work in Zurich. Now, in Season 16, she's offering Meredith a chance to come to Switzerland too — and the text had fans excited for a potential Cristina and Meredith reunion. Spoilers ahead for Grey's Anatomy. Meredith caused such a major stir at Grey + Sloan Memorial Hospital in "It's Raining Men" that it inspired an old pal to reach out to her. Cristina texted Meredith on Grey's Anatomy about her hit piece directed at the hospital. But don't expect Oh to be popping back into Grey + Sloan just yet.

On Thursday's episode, Meredith unintentionally slammed her former workplace when a site published her ideas on health care with the misleading headline, "Hospital Hell A Grey Sloan Memorial, Fired Surgeon Speaks Out." Understandably, one of Meredith's first reactions to the article being published without her authorization was, "Bailey's going to kill me." All the way from Europe, Meredith's "person" Cristina had the exact same reaction.

Forget Switzerland being neutral because Cristina texted, "Move to Switzerland before Bailey murders you in your sleep." Meredith showed no real interest in Cristina's proposition (and Bailey ended up being more distracted by the fact that she's pregnant to commit a murder). But at least the text exchange was kind of, sort of a return of Cristina Yang on Grey's Anatomy.

Oh has been busy since her character left Grey + Sloan Memorial Hospital for good in 2014. She had a multiple-episode arc in Season 3 of American Crime, hosted Saturday Night Live, and will be providing a voice in the upcoming adult animated show Invincible. But her most notable post-Grey's project has been Killing Eve. She became the first Asian-American woman nominated in the Lead Actress in a Drama category at the Emmys and went on to win a Screen Actors Guild award and her second Golden Globe for her role of Eve Polastri. She'll continue to track down (and be infatuated with) Jodie Comer's Villanelle in Killing Eve Season 3.

While Oh had left the possibility of a Cristina cameo open in the past, the actor has stated more recently that she doesn't see herself coming back — in particular, because of her starring role in Killing Eve. At the Killing Eve Season 2 premiere in April, Extra asked Oh if she would ever return to Grey's, and she replied pretty definitively. "No," she said. "Creatively, you have moved on and while I know, and I deeply appreciate, because I can feel it from the fans, how much they love Cristina and how the show keeps Cristina alive, for me, [Killing Eve] is my home now," Oh said.

Cristina will always be present on Grey's Anatomy. But as for the actor that plays her — Oh seems to have said goodbye to Cristina for good, even if Meredith and fans haven't.