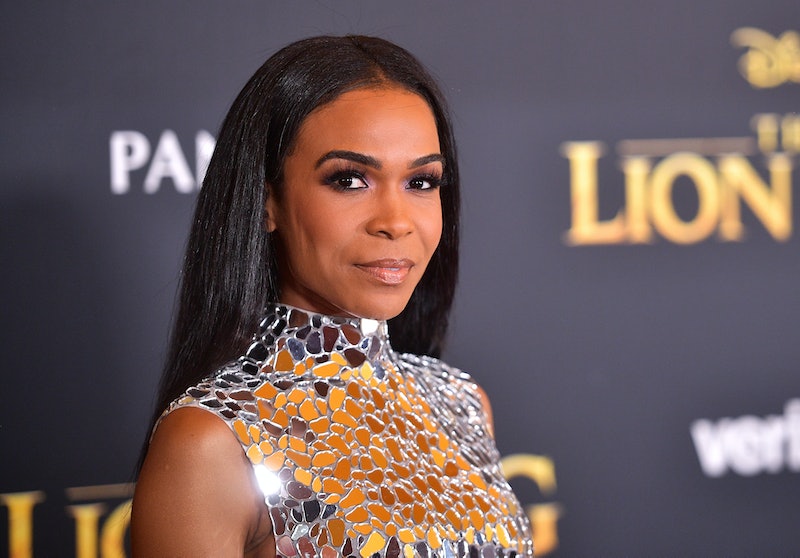 Keeping secrets can be hard. Especially when it's like, a really good secret. Like, the kind of secret that, once it gets out, you know for a fact that people are going to straight-up lose their minds. That's why Michelle Williams' response to being asked about new Beyoncé music by Variety was so, so good. She gave no indication that she knew anything at all one way or another, which proves that she's *such* a good friend. Her response also proves that she just might be the new queen of serving face, so get ready to take notes.

So, by now you should be well-aware of the fact that Beyoncé voices Nala in the new remake of The Lion King. The film premiered in Hollywood on July 9, and Williams — Bey's former Destiny's Child bandmate and longtime friend — came out to show her support.

Williams stopped to chat with Variety while walking the red carpet, and was asked what she thought when she heard that her super-star friend had nabbed the role of Nala. "I thought it was absolutely brilliant," she told the outlet. "No one else could do it."

Williams was then asked if she'd heard "Spirit," the new song Beyoncé recorded for the film — which wasn't out at the time of the interview, but has since been released — and her response was *chef's kiss*. Seriously. It's like, instantly iconic.

When Williams was tasked with revealing whether or not she'd heard Bey's new song, she paused, briefly cut her eyes to the side, and then looked straight into the camera and started serving some seriously fierce looks. Not just like, one or two fierce looks, either. Williams gave face to the camera for a whole 10 seconds. You *have* to see it.

First, she did a few quick turns of the head, testing out angles before flashing a smile. She then slightly altered the angle of her body, and started straight-face smoldering while making sure to smize. At one point, an eyebrow was raised, lips were un-pursed, and finally, she tilted her head down and to the side, giving a sly grin.

"So, that's a no comment," the reporter eventually interjected. Yep, that's *definitely* a no comment. It's also the kind of best friend energy everyone should strive to have.

Williams tossed her head back and laughed in response, then covered her mouth with one hand. She looked like she was pretty pleased with her ability to keep Bey's secret, and honestly, can you blame her? Like, does anyone out there have a clue about what those poses were indicative of? Had she heard the new track or not? Zero clue. Zero.

Regardless, Beyoncé's new song for The Lion King soundtrack, is officially out, so Williams can rest easy. Well, for now at least. Queen B is still set to release The Lion King: The Gift, a multi-artist album described by PR Newswire as, "a musical interpretation of Disney's The Lion King and a love letter to Africa" on July 19, but it's probably safe to assume that Williams has plenty more face to serve if need be.