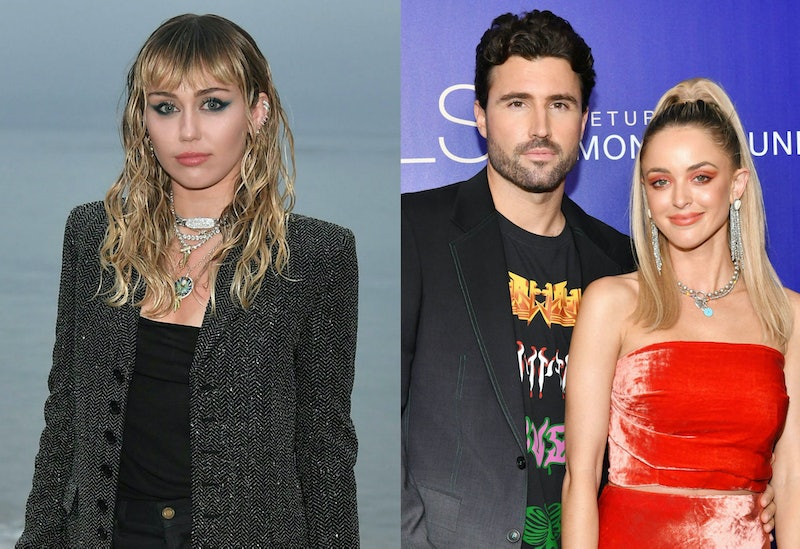 A lot happened at the 2019 MTV Video Music Awards, including Miley Cyrus, Kaitlynn Carter, and Brody Jenner attending the same after-party. According to E! News, the three showed up at Columbia Records' party in New York City. As awkward as it might sound, it appears no drama happened between Cyrus, Carter, and Jenner. It seems they all simply wanted to have a good time.

Based on a paparazzi photo shared by E! News, Cyrus and Carter showed up to the celebration holding hands. Jenner reportedly arrived after them and was photographed with Josie Canesco, the model The Hills: New Beginnings star has reportedly been dating since early August. Cyrus and Carter apparently chilled in the VIP section and Jenner sat near by the DJ booth. Per an E! News source, "Everyone stayed inside [for] about an hour. [The] club is very small, but no interaction was seen."

The three have made it clear that there's no negativity between them. Plus, they've all proven they're simply trying to move forward since Carter and Jenner broke up and Cyrus and Liam Hemsworth split in August. At the time of their breakup, Carter and Jenner's reps told Bustle in a statement, "Brody Jenner & Kaitlynn Carter have decided to amicably separate. They love and respect one another, and know that this is the best decision for their relationship moving forward."

As for Cyrus and Hemsworth, a rep for Cyrus told People, "Liam and Miley have agreed to separate at this time. Ever-evolving, changing as partners and individuals, they have decided this is what's best while they both focus on themselves and careers. They still remain dedicated parents to all of their animals they share while lovingly taking this time apart. Please respect their process and privacy." (Bustle previously reached out to both their reps for comment, but did not hear back.)

Cyrus and Carter's exact relationship status hasn't been confirmed, but they seem to only want the best for each other and their respective exes. Despite People reporting that Cyrus and Carter were seen kissing during a girls' trip right after their breakups, that doesn't mean anything romantic happened prior to their splits. They, along with Jenner and Hemsworth, seem to be trying to stay as positive about the whole situation, even though breakups are never easy.

On Aug. 16, Jenner released a passionate statement on Instagram defending Carter. In addition to saying Carter "deserves to be able to move forward in her life with respect and happiness," the MTV reality star wrote, "Kaitlynn is a wonderful person, beautiful and fun to be with, always a positive force in my life. We decided the best move for both of us was to keep our love for each other strong but move forward separately with our lives. I respect Kaitlynn and care deeply about her."

Like Jenner, Hemsworth also opened up about the end of his marriage on Instagram. Hemsworth shared on Instagram on Aug. 12, "Hi all Just a quick note to say that Miley and I have recently separated and I wish her nothing but health and happiness going forward. This is a private matter and I have not made, nor will I be making, any comments to any journalists or media outlets. Any reported quotes attributed to me are false. Peace and Love."

Cyrus also discussed her split from Hemsworth on Aug. 22 and made it clear she never cheated on her ex-husband, nor does she wish him any ill-will. She shared on Instagram, "I can admit to a lot of things but I refuse to admit that my marriage ended because of cheating. Liam and I have been together for a decade. I’ve said it before & it remains true, I love Liam and always will."

Cyrus concluded her lengthy post, "BUT at this point I had to make a healthy decision for myself to leave a previous life behind. I am the healthiest and happiest I have been in a long time. You can say I am a twerking, pot smoking , foul mouthed hillbilly but I am not a liar. I am simply in a different place from where I was when I was a younger."

Some people might want to believe there is nothing but drama between Carter, Jenner, Cyrus, and Hemsworth, but that doesn't appear to be the case. More than anything, it seems like they all want to move forward and stay positive in the process.

More like this
17 Years Ago, 'Hannah Montana' Reportedly Almost Cast This 'Gossip Girl' Star
By Grace Wehniainen
Selena + Chef Season 4 Was Filmed At Hannah Montana's Old Malibu House
By Jake Viswanath
Alexis Bledel & Vincent Kartheiser Separated After 8 Years Of Marriage
By Sophie McEvoy and Lia Beck
Nicola Walker’s IRL Husband Is No Stranger To TV Screens
By Darshita Goyal
Get Even More From Bustle — Sign Up For The Newsletter