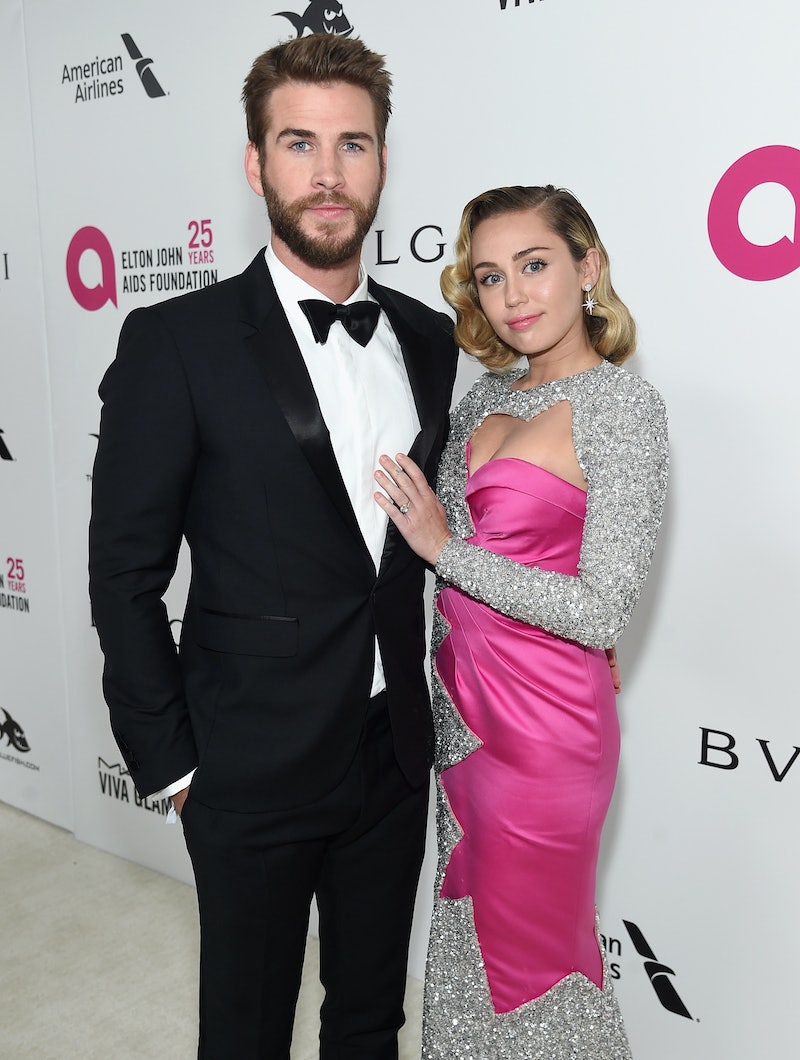 Love is in the air today, and no matter your relationship status it's hard not to swoon over the celebrity couples celebrating Valentine's Day. Prime example: Miley Cyrus shared new wedding photos from her December nuptials with Liam Hemsworth on Instagram. And yes, they're so sweet, they'll probably make your heart beat a little bit faster.

Cyrus and Hemsworth officially tied the knot on Dec. 23, 2018 in a small ceremony surrounded by their loved ones, as reported by BBC. Since then, the newlyweds have slowly been doling out new photos from their special event with Cyrus bestowing the world with not one, but three new romantic pictures to celebrate her first Valentine's Day as part of a married couple. In the first pic, the singer is sitting in front of what appears to be part of her wedding cake with a big smile on her face. Hemsworth is standing beside her grinning, and there's a ton of balloons in the background. She captioned the post by writing "LOVE YOU Valentine @liamhemsworth," but she replace the "o" in love with a heart emoji. Could these two get any cuter? The answer is yes, yes they could.

In the second photo, they're sitting with their heads together, and Cyrus is pulling an adorably goofy face while Hemsworth smiles. "My Valentine every single day @liamhemsworth," she wrote. But she definitely saved the best for last. The Last Song star shared a third photo taken in front of a fireplace surrounded by a flower altar. This time, the couple has their arms wrapped around each other, and Cyrus wrote:

"Thank you for always bending down to hug me ... I promise I will always meet you in the middle on my tippiest toes! I love you Valentine! @liamhemsworth"

Seeing just how sweet these two are is enough to make anyone a Valentine's Day believer.

Cyrus and Hemsworth met on the set of The Last Song in 2010, but their road to happiness wasn't always smooth. They began dating during filming, and got engaged in 2012. However, the timing wasn't right, and they split in 2013. By 2015, the talented duo had found their way back to each other, and they officially said "I do" in 2018.

Through it all, their love and support for each other has been evident even in the face of adversity. They lost their Malibu home in the November California wildfires, but when she told fans, Cyrus focused on the fact that she, Hemsworth, and their animals were all safe.

More recently, Cyrus stepped in to walk the red carpet for Hemsworth's new film, Isn't It Romantic while her husband dealt with health issues. He wrote on Instagram, "Sorry I couldn't make it to the @isntitromantic premier tonight guys. Been dealing with some pretty annoying health stuff the last couple days. Lucky I have the best girl in the world to represent for me! Thanks for the support babe!"

While they're on the private side as far as celebrity couples go, when these two do share parts of their relationship with the world they tend to show all the special ways they stand by each other.

They may still be newlyweds, but Cyrus' new photos just illustrate all over again how perfect she and Hemsworth are together.