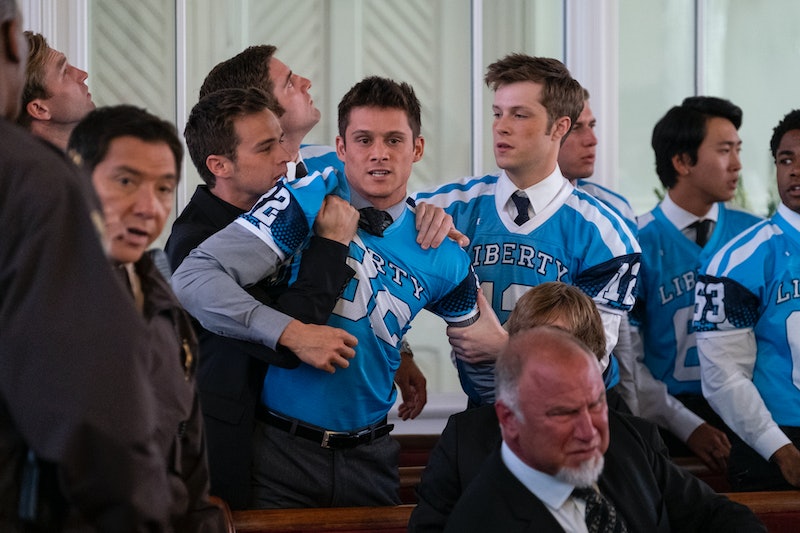 Spoilers ahead for 13 Reasons Why Season 3. Fans who were shocked by Monty's fate in the 13 Reasons Why Season 3 finale should know, so was the actor who plays him. "I didn’t know that until the very end [of filming]," Timothy Granaderos tells Bustle about learning that Monty would be framed for Bryce's murder. "I was legitimately kind of pissed off."

In fact, he was angrier about that than about learning Monty was going to die this season. "The minute he said it, I was a little bit sad," Granaderos says of creator Brian Yorkey telling him of Monty's fate, "but also I trust the writers to tell the right story."

At the end of Episode 12, Monty is arrested for sexually assaulting Tyler (Devin Druid) in the Season 2 finale, a horrific moment that left many fans and critics feeling as if the show went too far. Even Granderos told the Radio Times earlier this month that watching the graphic scene made him "nauseous." (Last year, Yorkey defended the controversial scene, telling Vulture that it gave an "unflinching" look at abuse that is really happening in high schools across the country.)

Monty's arrest should feel like justice, especially after Bryce was only given three months probation for raping Jessica (Alisha Boe). But that event is quickly one-upped by another bombshell: In the finale, it's revealed that Monty died while he was in jail, a pivotal moment that happens offscreen. His death allows Clay (Dylan Minnette), new girl Ani (Grace Saif), and the others to falsely accuse him of killing Bryce to protect Alex (Miles Heizer), who pushed Bryce to his death.

Granaderos says "there was a discussion" about whether he would film Monty's death scene, but "at the end of the day, they decided it would be the best fit for off-camera." And he believes that was the right decision. "It would have been a nerve-wracking scene to shoot," he says now.

It would be easy to cast Monty as the villain of Season 3, but 13 Reasons Why shows how he is both a villain and a victim. After growing up with an abusive father, Monty has learned to mimic that destructive behavior not only towards others, but himself. It's revealed this season that Monty is gay, but is too ashamed to admit that. "That’s tough to carry around," Granaderos says. "That’s a heavy burden not to be yourself. So he masked his true feelings and it comes out in anger and aggression."

"Violence begets violence," Ani says early in the season, echoing a quote from Martin Luther King, Jr. Monty is the epitome of this notion that a violent chain reaction can start if this behavior goes ignored. In the Season 3 premiere, Monty even asks the police as they bring him into the station for questioning, "How is it that my dad beats the sh*t out of me, and I'm the one that gets arrested?"

Granaderos doesn't think Monty's dad's abuse is an excuse for the terror his character has inflicted on Tyler and others, but he says it contextualizes where his behavior come from. "It makes more sense," he says. "They’re not just senseless acts of violence, it's pent up aggression. He’s trying to understand what’s going on inside of his head."

Toxic masculinity is a running theme throughout this season, with each of 13 Reasons Why's young male characters struggling to become men. Monty, perhaps, most of all. "Right now, being a man is being redefined in a lot of ways," Granaderos says. "I think that this show is introducing the idea that it’s okay to be vulnerable and it’s okay to talk things out. Especially if you’re a young man in a culture like football that doesn’t necessarily promote emotions."

Before Monty's death, there are signs that he was starting to change. In the finale, Monty even attempts to come out to his dad while in jail, only to have him spit in his face. "I think it was probably one of the only true moments in Monty's life," Granderos says. "He was saying how he felt and he was speaking his truth in a very indirect way with his father. It's a tragedy, really."

13 Reasons Why is already filming its fourth and final season, but Granaderos won't confirm whether he will return in some capacity, though he does hint at the possibility. "Ugh," Granaderos says, his voice going up an octave. "We do tell stories in a flashback format, so there could be a chance to see Monty in Season 4."

Whether he returns for the finale season or not, Granaderos would like to see Monty get justice — or at the very least, some empathy. "I would hope for fans to see that behind the villain," Granaderos says, "there’s just a little boy trying to figure it all out."

More like this
'The Sandman’s Ending Is A Departure From Neil Gaiman’s Comic Book Series
By Kadin Burnett
Fans React To Gabby & Rachel’s 'Bachelorette' Shocking Rose Ceremony Twist
By Grace Wehniainen
Everything To Know About The Sandman Season 2
By Kadin Burnett
Does 'Locke & Key’s Ending Mean There Could Be A Season 4?
By Sophia Moore
Get Even More From Bustle — Sign Up For The Newsletter