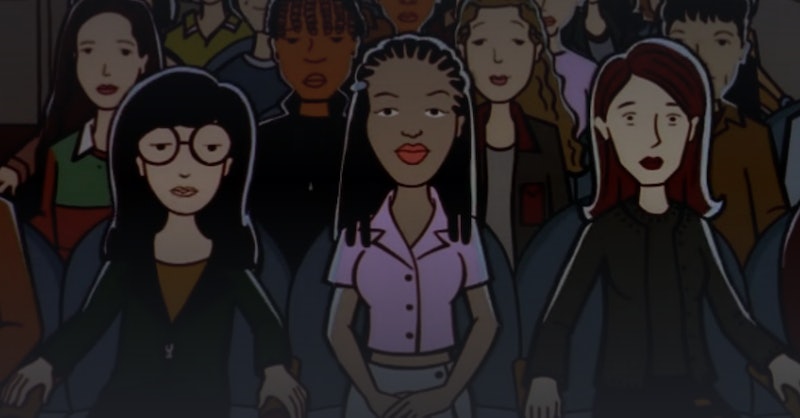 Excuse me, but this a very important announcement for all '90s kids. It turns out MTV is not giving fans a Daria revival. No, instead, they're giving them something even better: a Daria spinoff Jodie starring Tracee Ellis Ross in the titular role. Oh, and if that's not enough excitement for you, according to MTV, this this is just the first project to come from the studio's Daria expanded universe.

This new animated series written by Insecure's Grace Nkenge Edwards will satirize the post-college life for a Gen Z audience, which means this is a new Jodie for a new group of kids who want their MTV. In fact, Jodie is the first adult animated series to star an African American female lead in nearly 20 years, according to MTV.

While Daria was wise beyond her high school years, Jodie is trying to navigate those years after college. In a press release, MTV said Jodie "will follow her as she comes into her own and enters the workplace in her first post-college job in tech." She won't be doing it alone, though. According to MTV, some of Jodie's former classmates from Lawndale High will also appear on the show. No word yet on which Daria characters will make cameos on Jodie.

While there's no word yet on when Jodie will premiere, Ross couldn't hide her excitement about getting to play "the brilliant, sweet and sarcastic black girl magic that is Jodie Landon." In her statement via MTV, Ross said, “Being able to give voice to fresh, feminist and unexplored stories of young women excites me."

Ross also stated that Jodie will feature "a diverse cast, comprised mainly of unapologetically smart and ambitious young female characters who are vulnerable and flawed and interesting and funny."

For those who wanted more info on Jodie, Ross also shared that the series will be "a smart, funny workplace comedy full of commentary about everything from gentrification to sex to tech to call-out culture." In other words, what Daria was for past generations, Jodie will be for those growing up now looking for a funny, feminist character who gets how they feel.

Last year, it was announced that MTV Studios was working on a reimagined Daria series called Daria & Jodie as part of a new slate of shows that will gives fans all the nostalgic feels. Just last week, MTV announced a Punk'd reboot is in the works. Each episode of the hidden camera prank show from the early aughts will be 10 minutes long and stream via Quibi, "a mobile-first media technology platform." MTV is also rebooting Singled Out, the '90s dating show originally hosted by Chris Hardwick and Jenny McCarthy, and bringing back The Real World.

So much TV, so little time, but let's guess that won't stop anyone from a Daria marathon to catch up with Jodie before she returns to the small screen.