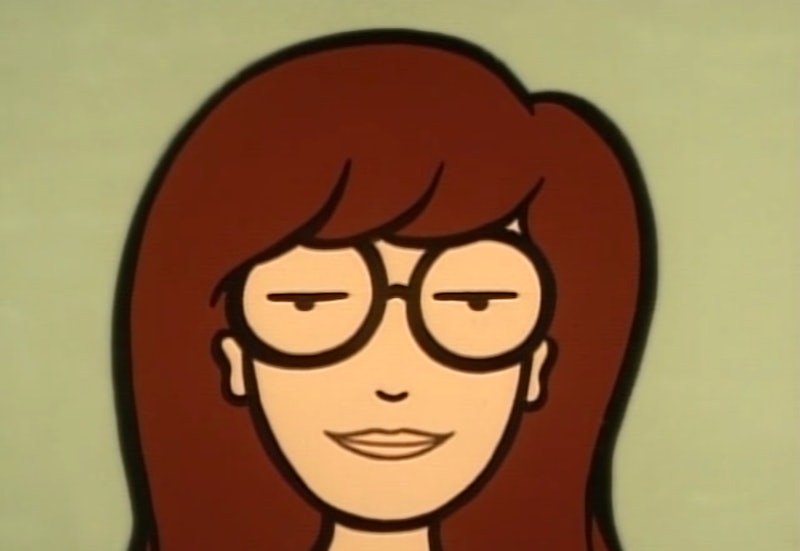 You may just be overcome with emotion when you hear this news and no, that isn't a sarcastic statement. Every season of Daria is streaming on Hulu. Now fans will easily be able to watch all five seasons of the iconic show that chronicled Daria Morgendorffer's sardonic high school experience. Even better, it's a way for fans to catch up on the original before the newly announced Daria reboot hits the small screen.

Variety reported that a new deal between Hulu and Viacom, which owns MTV, Nickelodeon, and Comedy Central, gives the streaming service exclusive rights to MTV shows like Daria and the show where Daria got her start, Beavis and Butt-Head. This isn't the first time Daria and the rest of the Morgendorffer's have been available to stream — previously, the show was only available on Amazon Prime Video — but Hulu is now the go-to place to see her. (So, if you need a laugh after your weekly Handmaid's Tale viewing, you've got a new show to turn to.)

As part of this deal, Hulu will also have streaming rights to other series including another droll character Nathan Fielder and his Comedy Central series Nathan For You. For those looking for more high school fun, though, Hulu is also streaming MTV's My Super Sweet 16 and Nickelodeon shows like Big Time Rush. And in the upcoming year, there are plans to add even more Viacom to Hulu's streaming list.

This new streaming deal comes shortly after MTV announced plans to relaunch MTV Studios and reboot some of its biggest '90s hits including The Real World, Aeon Flux, and most notably, Daria. The reboot of the animated series, which ran from 1997 to 2002, is less of a revival, though, and more of a "reimagining" since this new iteration will focus on Daria and Jodie, who appeared in the original and, as most fans would agree, deserved more time. Luckily, with the new iteration of the classic show, Jodie's going to get it.

While this may sound like a big change, don't worry, the logline for the show, tentatively titled Daria & Jodie, definitely sounds like it's staying true to the spirit of the original. “These two smart young women take on the world with their signature satirical voice," the show's description states, as reported by Deadline, "while deconstructing popular culture, social classes, gender and race.” Yes, Daria is getting more woke in this new edition, which is saying something since Daria always felt ahead of its time taking on topics like race, identity, and body image when it first aired.

The news that Daria was returning was met with a lot of excitement, especially since Daria feels like a voice that is still needed in 2018. Hers is a voice that isn't afraid to question the status quo and fight back against injustice that she faces both in school and beyond the hallowed halls of Lawndale High. One that would certainly have some pretty critical and on point things to say about our current state of affairs.

But, over the years, more TV characters have been created in Daria's sarcastic mold, so how then do you make it feel new all these years later? Having Daria team up with Jodie, a popular character who was always less vapid than head cheerleader Brittany or Daria's little sister Quinn, could be the perfect way. While Jodie was a supporting player in the original Daria, the show did give her moments to talk about her concerns of being one of the only black students at the school, giving the show the opportunity to have more serious and inclusive conversations about social issues. Giving her more screen time in the reboot means that this new show can spend more time having smart and tough conversations about race, gender, and identity at a time when young people are having those conversations every day.

No word yet on when Daria and Jodie will premiere, but BuzzFeed reported that the series will be written by Grace Edwards, who’s worked on Unbreakable Kimmy Schmidt and Inside Amy Schumer. It's also unclear how many of the show's original characters like Daria's bestie Jane and Daria's crush Trent will appear on this new series. For now, as fans await more details on the reboot, streaming the original on Hulu feels like the closest to new Daria fans can get.