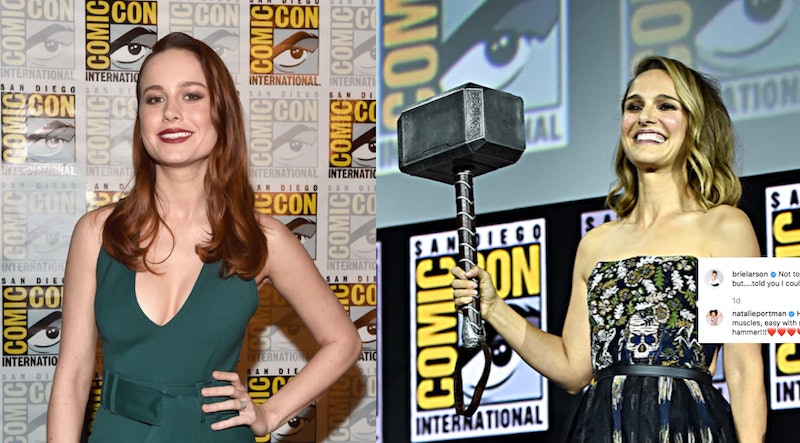 It's a good thing Thor got a new weapon in Avengers: Infinity War. It seems Captain Marvel herself, Brie Larson is laying claim on Thor's hammer. Or, at least, she's trying to since Natalie Portman isn't quite ready to give up Mjölnir just yet. In a new Instagram post, Larson showed just how strong Carol Danvers is by lifting up Thor's actual hammer. "Not to be whatever, but....told you I could lift it," Larson joked. It's almost if it was just some run of the mill hammer she had around her house.

This snapshot is a callback to a 2018 interview in which Larson boasted that Captain Marvel could totally lift Thor's hammer, a weapon that was believed to respond only to Thor's strength. "Definitely," she confidently told the interviewer. And why wouldn't she have been confident? After all, Captain Marvel is believed to be the new most powerful Avenger—even Chris Hemsworth thinks so.

Of course, Larson isn't the only one with the power to lift Thor's hammer, as seen in Avengers: Endgame when a certain Captain wielded the God of Thunder's precious weapon. Moreover, last month it was announced that Portman will star in Thor: Love and Thunder as the new Thor, who just so happens to be female. And, just in case you were wondering, Portman's Jane Foster is not the Female Thor. "Correction. She's called Mighty Thor," director Taika Waititi tweeted at a fan back in July who made that unfortunate mistake.

Portman's so mighty that she wanted to make it clear, that this hammer is hers. She even took to the comment section on Larson's post to make sure Captain Marvel's followers and everyone else knew what's up. "Hey muscles," Portman wrote, "easy with my hammer!!!"

This exchange, which included four heart emoji, was all in good fun, of course. In fact, Portman already knows how much fun it is to wield Thor's hammer. When she got a chance to hold Mjölnir for the first time at San Diego Comic-Con, she told the crowd, per Entertainment Tonight, "Feels pretty good. I’ve always had a little hammer envy."

This fun back and forth between two of the MCU's female heroes has fans wanting more. In fact, they would like to see Captain Marvel and Portman's Jane Foster team up in Marvel's next phase, which will include a Black Widow standalone film and Mahershala Ali in Blade.

One fan even suggested this new phase should include a "Captain Marvel and Jane Foster friendship." Sounds pretty good, doesn't it?

The idea of a Captain Marvel and Jane Foster team-up would probably have a fan in Cate Blanchett, the MCU's first female villain in Thor: Ragnarok. Last week, she told ET that she was excited for Portman's new role. "I'm so, so excited," she said about the upcoming film. ""I'm so looking forward to seeing it, because I absolutely loved seeing them with all with my kids." Her kids favorite Marvel movie? Well, that would be Captain Marvel.

For now, it's unclear when Captain Marvel will return to the MCU. The next Marvel-less phase is already planned out until 2021, which means Larson might not show up until 2022. But based on the way she's handling that hammer, it seems that fans can rest assured that she's still keeping in fighting shape for whenever the world may need her.

More like this
The 'Scream 6' Trailer Shows Off Hayden Panettiere's Return & Ghostface In NYC
By Jack Irvin and Jake Viswanath
Anne Hathaway Shared A "Thrilling" 'Princess Diaries 3' Update
By Darshita Goyal
'The Queen’s Gambit' Season 2 Tweet Wasn’t From Anya Taylor-Joy
By Mary Kate McGrath, Jack Irvin and Grace Wehniainen
Twitter Is Identifying With Sally Field & Jane Fonda’s Friendship In New Viral Video
By Jake Viswanath
Get Even More From Bustle — Sign Up For The Newsletter
From hair trends to relationship advice, our daily newsletter has everything you need to sound like a person who’s on TikTok, even if you aren’t.