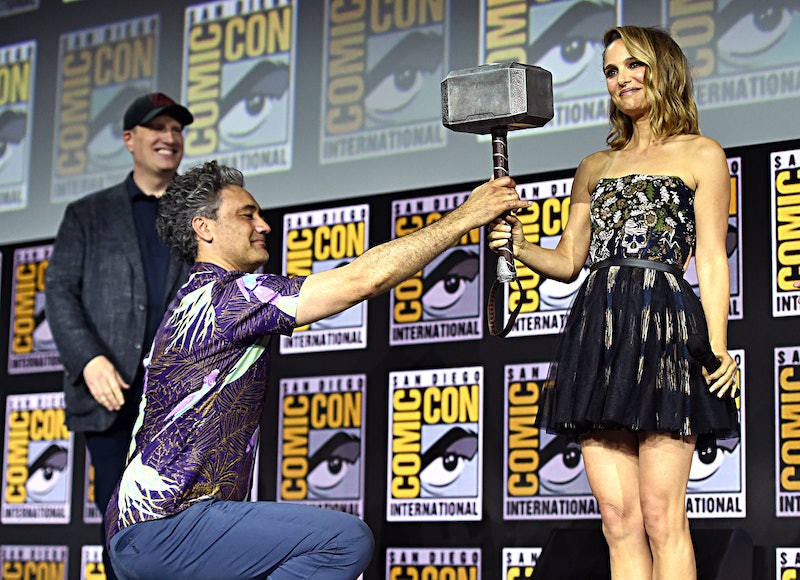 Don't worry, Marvel's first female villain is very excited about the news of a new Thor, who just happens to be female. Cate Blanchett is in full support of Natalie Portman's Thor. It was announced Portman is returning to the MCU in Thor: Love and Thunder as astrophysicist Jane Foster, who has now gained the power of Thor and can wield his hammer Mjolnir.

While promoting her new movie Where'd You Go, Bernadette, Blanchett talked to Entertainment Tonight about Portman's new Marvel role, which is based on The Mighty Thor comics. "I'm so, so excited," Blanchett told ET of Portman taking the hammer from Chris Hemsworth in Thor: Love and Thunder. "I'm so looking forward to seeing it, because I absolutely loved seeing them with all with my kids."

Blanchett then shouted out her favorite Marvel film, throwing a little shade at her Thor: Ragnarok director Taika Waititi in the process. "But I really, really loved Captain Marvel," Blanchett said. "No offense, Taika, but it was probably my favorite."

When Blanchett was cast as Hela, the Goddess of Death in Ragnarok, she became the first female villain of the MCU. To be honest, Blanchett was surprised to hear this being that there are a lot of Marvel movies in the past decade with a lot of bad guys.

"Well let’s face it," Blanchett told Entertainment Weekly in 2017, "as a woman, these opportunities have not in the past come up very frequently and I think there’s a revolution happening from within Marvel."

That revolution has not been swift, but it does appear that Phase 4 of the MCU is putting female characters front and center with Portman's Thor directed by Waititi, who made it clear should not be called "Female Thor," thank you very much. "Correction. She's called Mighty Thor," he tweeted at a fan back in July.

This new phase also finally includes the standalone Black Widow movie, which stars Scarlett Johansson, but also features Rachel Weisz and Florence Pugh and will be directed by Cate Shortland.

When this new phase was announced at San Diego Comic-Con last month, Johansson went as far to tell those in Hall H, ""It’s pretty explosive. The future is female for Marvel, that’s what it feels like." Later she told Entertainment Tonight, "Ten years ago, if you told me that I would be standing in Hall H and presenting this footage to all the fans, it would have seemed incomprehensible."

When talking to Entertainment Tonight, Blanchett said it was Victoria Alonso, a Marvel Studios executive and producer, who deserves the credit for the MCU's female future. "She has been an incredible advocate for feminizing that universe," Blanchett said. "It's right and true that those franchises should be actually cutting-edge, because that's traditionally what [comics] have done."

For Blanchett, having more women leading the MCU is a way to push the comic book genre forward. "To know that Natalie is going to have such a pivotal role is really exciting," she said. Not only for fans, but for those who have been a part of the MCU.