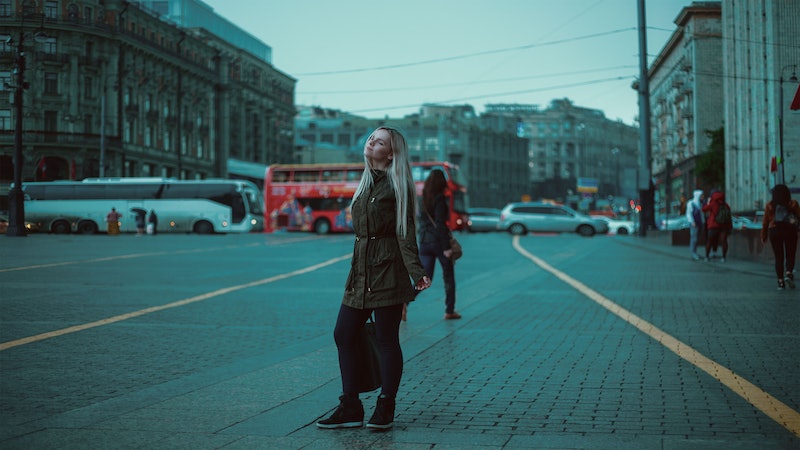 Pixabay/Pexels
By Suzannah Weiss
May 8, 2017

One thing cisgender men don't always understand about women and gender-nonconforming people is how scary everyday activities can be for us. Like, say, taking the bus. Nathalie Gordon's recent Twitter thread about being sexually harassed on public transportation shares exactly why women feel unsafe pretty much every day of their lives. Pretty much every woman can relate to it, and it's a must-read for any man who wants to understand what we go through.

In the Twitter thread, which is dated May 4, Gordon recounts taking the bus in London when a man allegedly asked her where she was headed. She replied honestly that she was going to a meeting, after which she says he asked her out for a drink. She told him, "No, thank you" — more politeness than was even required — and put her headphones back in. Then, the man allegedly took her headphones out of her ears, said "Don't be rude," allegedly proceeded to "rub his crotch," and laughed when she asked him to stop. When she told the driver what had happened, she claims he told her, "You're a pretty girl, what do you expect?" She didn't give up, though. She spoke to the British Transport Police and Transport for London multiple times, Gordon tells Bustle, and they've opened an investigation.

In response to the bus driver's comment, Gordon fired off a list of things women should be able to expect, but sadly, rarely get.

Gordon tells Bustle that many, many women have shared similar stories with her, and I'm not surprised. It brought back all sorts of memories for me, like the time in college that boys in the dorm were spying on me and their supervisor told me, "Boys will be boys." Or the time someone groped me on a train and when I looked around for support, the other passengers avoided eye contact with me. Or just two nights ago, when a cab driver asked for my number four times after I said "no."

"I think that's what compounds everyday fear in women," says Gordon. "One of the most terrifying things about this whole ordeal is how many women are saying, 'Yeah, me too.'"

Since this kind of thing is happening around us all the time, it's important for bystanders to be on the lookout, says Gordon. While she can't say what to do in every situation, she notes, "Don't ignore it. Find help. Be the help. Make a noise. Shout. Scream. Go sit with the vulnerable person. Embarrass the perpetrator. Call the police." This sends the message that what's happening isn't normal, even though it may be normalized.

Bystanders "have the ability to change a situation," Gordon says. "They don't know how much just an acknowledgement that they know something is happening that is wrong and they're with you, weathering the storm beside you — that would have transformed how I would have felt at least."

According to Hollaback!, you can intervene in street harassment by giving the victim a knowing look, asking them if they're OK, or confronting or distracting the harasser. And if any of your friends does something to make anyone uncomfortable, speak up.

After reading Gordon's Twitter thread, some men have been tweeting at her that "not all men" do this — but that totally misses the point. "I've just been very clear that all men need to know that this happens and try and understand what we live with, day in, day out," she says. "We don't need heroes — we are not damsels in distress. We want people standing beside us, men on our side, bystanders who use their power to change situations."

If you experience sexual harassment, Gordon recommends reporting the incident if you feel comfortable and finding someone who will help and support you. But ultimately, the decision of how to respond is totally up to you, and the work of standing up to sexual violence shouldn't have to fall on the victim's shoulders. Whatever you do, says Gordon, just know your experience is valid and you're not alone.