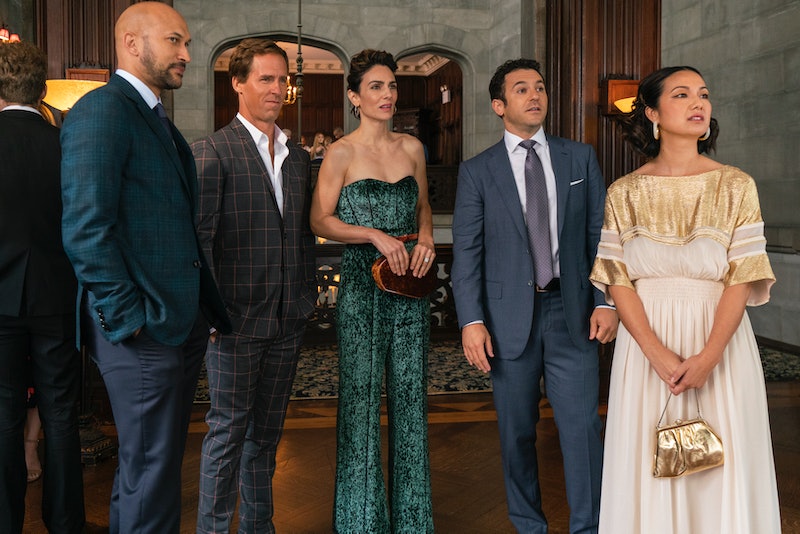 Just like many college buddies, these ones are unfortunately going their separate ways. Netflix canceled Friends From College, announcing on Tuesday, Feb. 19, that the series won't be back for Season 3. This announcement comes just over a month after the second season of Friends From College dropped on the platform.

The show's co-creator Nicholas Stoller, who created the show with Francesca Delbanco, first addressed the cancellation in a tweet on Monday, Feb. 18, night: "Friends from College will not be returning for a third season. Thanks to everyone who watched it. Happy Presidents’ Day!"

In a statement to TVLine, a Netflix spokesperson thanked executive producers Stoller and Delbanco, who loosely based the show on their own friends, “for creating a wise, funny and supremely relatable show," which spanned 16 episodes in two seasons. The streaming network also thanked the “hard-working crew” and “amazingly talented cast," which included Cobie Smulders, Keegan-Michael Key, Annie Parisse, Nat Faxon, Fred Savage, Jae Suh Park, and Billy Eichner.

None of that made fans feels better, though, since many of those who watched the show felt the second season of the series, which focuses on Harvard classmates who are still friends two decades after graduating, ended on a strong note after getting mixed reviews for its first go-round.

It also ended with a twist. After struggling to get pregnant, Lisa (Smulders) finally learns that she is expecting in the finale. "Dear @netflix, you can't start a show like #friendsfromcollege and then just cancel it right when we find out Lisa is pregnant," a fan, @morgansmom2002, tweeted. "We have grown to love these people and it is extremely disrespectful to cut us off from these people who we have invested so much time in."

Other upset fans just threw Netflix's own content back at them with some showing their frustration using screengrabs of Jake Gyllenhaal in Velvet Buzzsaw and Friends From College gifs.

Like one fan named @MandaPertz, who tweeted in response to hearing that Friends From College was canceled a gif of Smulders' Lisa screaming, "You come over here and you say that to my face!"

According to TVLine, Netflix has canceled nearly two dozen of its original series in the last year including American Vandal, Everything Sucks!, and Fuller House, which will conclude with its fifth and final season. This upcoming season will also be Orange Is The New Black's last. OITNB Season 7 will air later this year.

And while it won't be easy to say goodbye to these college friends, here's to hoping there will be a reunion sometime soon. Hopefully, one fans will be able to see.