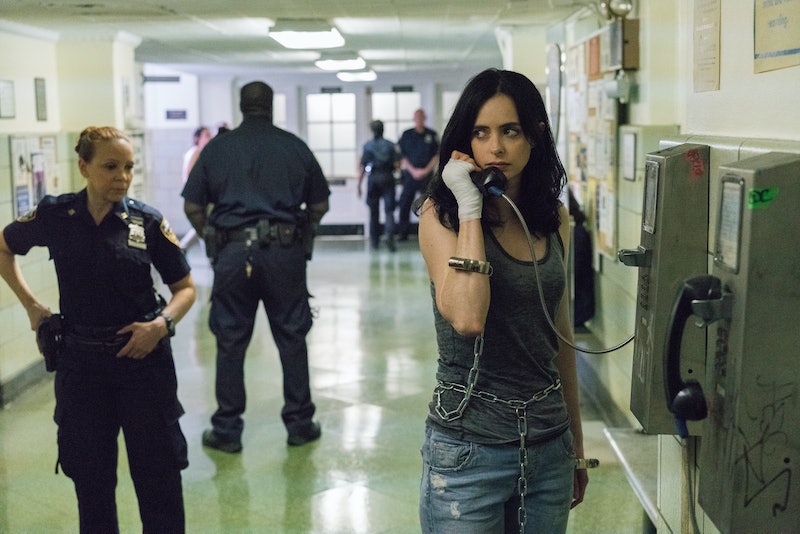 It's been over two years since it first graced the screens of Netflix users, but Jessica Jones finally returns for Season 2 on March 8. It's been a long wait to see how the lives of Jessica and those around her have changed after the season-long struggle against Kilgrave, but will the wait for Season 3 take as long? If Jessica Jones returns for Season 3, it could be another lengthy hiatus before viewers get another fix of the reluctantly heroic private investigator.

UPDATE: The Hollywood Reporter reported on April 12 that Jessica Jones has been renewed by Netflix for Season 3. No premiere date was announced.

UPDATE: In February 2019, Netflix announced that it was canceling Jessica Jones, although Season 3 would still air.

EARLIER: While followers of the Marvel-Netflix Universe got a quick look at how Jessica's life has been going in the crossover series The Defenders, Season 2 of Jessica Jones will be all about her and her friends. In between Seasons 1 and 2 of Jessica Jones, Netflix and Marvel aired a second season of Daredevil, debuted Luke Cage and Iron Fist, and even premiered The Punisher, a spin-off solo series for the antihero character introduced in the second season of Daredevil. Part of the reason that Jessica Jones took so long to return is that Netflix was in the process of launching its own Marvel Universe, leading up to The Defenders. However, now that the streaming universe seems fully launched, the production rate of Netflix-Marvel series could increase — but that may not correlate to less downtime between seasons.

According to ScreenRant, Netflix is on track to be premiering three Marvel seasons in 2018. This includes Season 2 of Jessica Jones, as well as Season 2 of Luke Cage and Season 3 of Daredevil. This will be the second year in a row that Netflix has debuted three Marvel series, having premiered Iron Fist, The Defenders and The Punisher in 2017. Assuming that Netflix continues to produce three seasons of television a year and sticks to a roster of six shows, it would seem that a new season of Jessica Jones could be expected every two years — meaning it will likely be 2020 before fans get to see what happens to Jessica after the conclusion of Jessica Jones Season 2.

However, just because seasons of Jessica Jones can be predicted to air every other year, doesn't meant that fans will be cut off from the foul-mouthed private eye. While Jessica Jones has mostly stuck to her own series, there's always that chance that she'll pop up in other Marvel-Netflix television series in the future. Luke Cage made his debut in Jessica Jones before getting his own series, after all, and Entertainment Weekly reports that Season 2 of Luke Cage will feature a team-up between Cage and Danny "Iron Fist" Rand. Could there be a Jessica Jones/Daredevil team-up in a future season of Daredevil? Perhaps Jessica and Frank Castle would be able to trade stories about their respective traumas in a future season of The Punisher. Even if she doesn't step foot in another character's series, if there is ever another season of The Defenders, fans can expect Jessica Jones to show up along with the rest of the Netflix-Marvel roster.

It's been a while since fans last saw Jessica Jones, and and likely hungry for updates on how Trish, Malcolm, and Jeri Hogarth are doing, and if it'll be revealed what happened to Will Simpson after his seemingly dead body was taken away by Dr. Kozlov. Netflix has yet to announce whether or not Jessica Jones will be getting a third season on Netflix, but because the streaming platform seems to be increasing its production of original Marvel series, it's probably safe to say that Season 2 won't be the last that the Netflix subscribers see of Jessica Jones.

More like this
The 'Dead To Me' Creator Says Her Series Finale Idea “Felt Very True To The Show”
By Brad Witter
'The Crown's “Annus Horribilis” Speech Is Wildly Different From Reality
By Darshita Goyal
How Is The British Royal Family Related To The Romanovs?
By Karen Fratti
Netflix Bumped Up The 'You' Season 4 Premiere Date — Here's What To Expect
By Bustle Editors
Get Even More From Bustle — Sign Up For The Newsletter