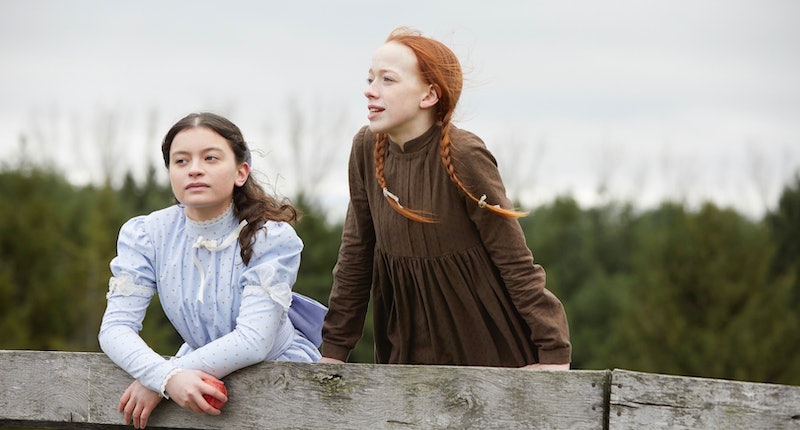 Anne of Green Gables has been a beloved book series since Lucy Maud Montgomery first wrote about the orphan Anne Shirley in the early 20th century. So, is it any surprise that some other Netflix characters were happy to learn about the premiere date of Anne on Netflix? With the help of some notable redheaded Netflix characters, the streaming service announced on Feb. 8 that its Anne of Green Gables series will premiere on May 12, 2017. And just like Anne's fellow gingers, you'll be thrilled to learn you only have to wait a few more months before traveling with the protagonist to Avonlea.

On Aug. 22, 2016, Netflix reported that it was partnering with Canada's CBC to create Anne, a TV series about the fictional Canadian orphan who is mistakenly sent to live with an elderly brother and sister on their farm in Green Gables in the late 1890s. Even though many adaptations of Anne of Green Gables exist, if you're a fan of the book series, you have understandably been eager to see Netflix's adaptation since you first heard about it.

The playful February announcement uses that anticipation to its advantage by focusing on Anne's signature red hair color and having redheaded characters from Netflix series receive the message that a "new ginger is in town." In the video, Lacie from Black Mirror, Kimmy from Unbreakable Kimmy Schmidt, Barb from Stranger Things, Red and Sister Ingalls from Orange Is the New Black, and Yael from Degrassi: Next Class all express their excitement that Anne will be joining their rare ranks on the streaming platform.

Beyond using clips from previously released Netflix shows to share that Anne will premiere in May 2017, the video also includes a few shots from the series. You get to hear the young Irish Canadian actress Amybeth McNulty speak some lines as Anne Shirley. The promo highlights McNulty embodying the feisty, talkative, intelligent, and totally lovable character in just a few seconds.

For people who love Anne's relationship with Gilbert Blythe (and, uh, who doesn't?), the premiere date announcement also shows the memorable moment where Anne hits Gilbert for calling her "Carrots" because of the color of her hair. The school scene from the 1985 miniseries Anne of Green Gables has Anne breaking her slate over Gilbert's head (just as its described in the original book), but Netflix's version looks like Anne smacks Gilbert across the face with her book.

No matter what liberties the Netflix and CBC version will take with Anne of Green Gables, the new series will still bring Montgomery's iconic character to life once more when it premieres on Friday, May 12. And if you're dramatic like Anne and that just seems too far away for you, you can always read the books again, watch the numerous adaptions, or catch up with Anne's soon-to-be redheaded bosom friends on those other Netflix shows.