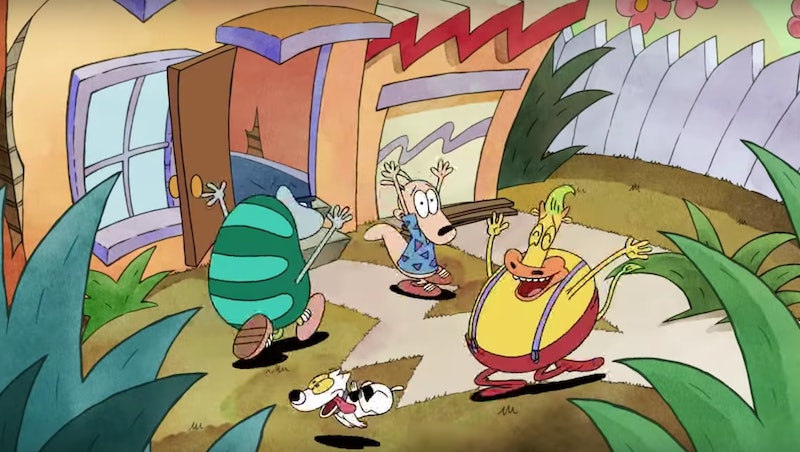 Raise a bucket of Chokey's Chicken, because your favorite little wallaby is making his triumphant return to the small screen next month. On Tuesday, July 16, Netflix announced the release date for the Rocko’s Modern Life animated movie. Rocko's Modern Life: Static Cling will hit the streaming service on Aug. 9. Netflix also shared a teaser of the movie based on the weird and wonderful '90s cartoon, and yes, it looks weird and wonderful.

"After being in space for around 20 years, Rocko and his friends attempt to conform to an even more modern life in O-Town, where coffee shops are on every corner, food trucks offer multi-layered tacos, touch-screen O-Phones are being upgraded on a near-constant basis, an instant-print kiosk has replaced Rocko's old job at Kind-of-a-Lot-O-Comics, and radioactive energy drinks turn their consumers into mutants."

Being a wallaby who spends two decades in outer space may not be an experience that many of us can relate to, but who among us does not know what it feels like to pine for a reboot of a beloved show from our youth? Hm? Hm?

This return to O-Town has been in the works for a while. In 2016, Nickelodeon announced that a Rocko’s Modern Life TV special is not only happening, but both series creator Joe Murray and the original cast are totally on board. In a press release from the network, Murray said,

“I’m very happy to be rejoining Rocko and my friends from O-Town again. What I have found by bringing these characters back is that it’s not so much about nostalgia, but a sense that they still feel relevant and fresh to me, and after twenty years, they can’t wait to comment on modern life in the 21st century. They still have a lot to say.”

The following June, Nickelodeon announced that it was slated to premiere in 2018, and a month later, the network shared a Rocko’s Modern Life: Static Cling sneak peek at San Diego Comic-Con. The Static Cling was so close, the hair on our arms could almost taste it.

Or so we thought. 2018 came and went and there was no Rocko's Modern Life: Static Cling to be found. Murray addressed what was going on with Static Cling on his blog last September, writing,

"Since we finished the Rocko Special Static Cling a year ago, there has been much speculation as to the whereabouts of this special, and if it will ever see the light of day. Some rumors have it with a streaming channel. Well, I’m sworn to secrecy, but there are many conversations being had about the future of Rocko, and who knows if anything will bear fruit. But I do know the Rocko special will be coming out fairly soon. I will keep this blog posted of any news. Remember this is entertainment. Many things happen. Most do not."

And then, in May of 2019, just under two years after the teaser was unveiled at SDCC, it was announced that Static Cling was headed to Netflix. Three weeks from this Friday, the Rocko's Modern Life special we've been waiting for since 2016, nay, 1996 will be here.