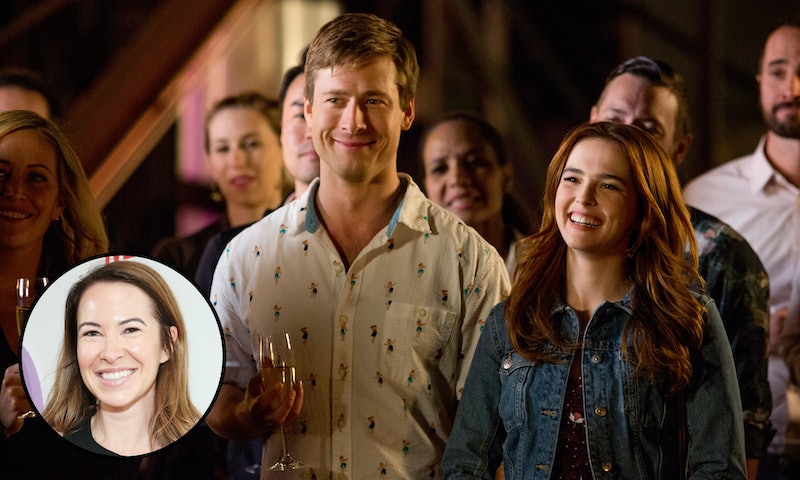 There's a line midway through Netflix's Set It Up that serves as a built-in synopsis for the entire movie: "When I was little my grandmother, she used to say, 'You like because, and you love despite," Becca (Meredith Hagner) recalls amid the string light glow of her rooftop engagement party, seconds after revealing all the innocuous qualities she can't stand about her fiancé. And yet, she sighs tearily, "I am completely and totally in love with him."

It's a sentiment Harper (Zoey Deutch) and Charlie (Glen Powell) later repurpose for their own predestined love story: after hatching a scheme to set up their work-obsessed bosses and reclaim their dwindling personal lives, they inevitably fall for each other. But according to Set It Up writer Katie Silberman, the mantra works more broadly, too — as a litmus test for their careers, their friends, their passions.

"I especially liked it as a theme for them to figure out their lives as a whole, that the hard stuff is worth it if it's what you really love," she tells Bustle of the line, a riff on a William Faulkner quote. "I think it's the most romantic idea. A lot of people, especially when they get caught up in the reasons [why] they like something, don't take the time to figure out, 'Do I love it? What am I willing to put up with?'"

And therein lies the magic of Set It Up. The film is, at its heart, a conscious homage to the '90s-era rom-coms Silberman grew up on: You've Got Mail, Sleepless In Seattle, One Fine Day, and all of the other golden age classics that have come to define the genre. It has the cutesy title, the predictable but oh-so-watchable premise, and even the unashamedly punny tagline: "Finding love takes some assistants." It is everything we used to love about rom-coms, but without the problematic elements that have since soured the originals. (There's still a white, heterosexual relationship at its center, but with a little more diversity baked in).

"I think we wanted to make sure that, specifically [with] Harper and Charlie, it felt like a true two-hander, like you could've watched a whole movie just about their professional [lives]," Silberman says. "Even going back to the classic romantic comedies that I love, that feels like the distinguishing factor, that they're about two people I believe are real people [and] that I would follow home regardless of whether I was watching them fall in love."

Indeed, Harper and Charlie are both fully realized, three-dimensional people with aspirations outside of finding The One, and while the world they inhabit is believable — they live in cramped city apartments and regularly bum free chips from a local Mexican restaurant — there's also a sense of destiny that makes you root for their love story, even to want one of your own. Set It Up doesn't find romance in grand gestures, but in its quiet moments: one of the sweetest scenes in the film is when Charlie and Harper sneak up his fire escape and past his fornicating roommate to share a few drunken slices of pizza. It's then, bleary eyed and slap-happy, that it begins to dawn on them that they might actually have feelings for each other.

Before they can get to that, though, they have to resolve their conflicting relationships with their respective jobs. Harper tells her boss about she and Charlie's plan, gets herself fired, and recommits herself to writing, her first true passion. Charlie, meanwhile, breaks up with his vacant girlfriend, quits his assistant gig, and decides to start over as a temp while he contemplates his next move. Neither of them have their lives figured out, but they're starting to get there. And being in their late 20s, both have some semblance of who they are, what they want, the kinds of people they aspire to be, and those that they want to surround themselves with. That's what makes Set It Up such a convincing millennial love story: it doesn't buy into the antiquated idea that your partner has to complete you, but rather, that they should complement you.

"In the best rom-coms, they're telling a story about a person who helps another person become the best version of themselves," Silberman says. "My parents married a lot younger than I did, my grandparents got married a lot younger than they did, and I think they kind of figured out themselves as a team. [But] in 2019, I know so many truly accomplished, hard-working young women and men who have figured themselves out or are on their way to [figuring] themselves out. [And I think] that's what Set It Up was trying to do as well. If you're 27 and really trying to determine [who you want to be], you're looking for a person who can help you and encourage you along that route, as opposed to finding a partner and then deciding who you want to be afterwards."

In other words, you're looking for someone you like because of the reasons they're right for you, and love despite the minor reasons they aren't.