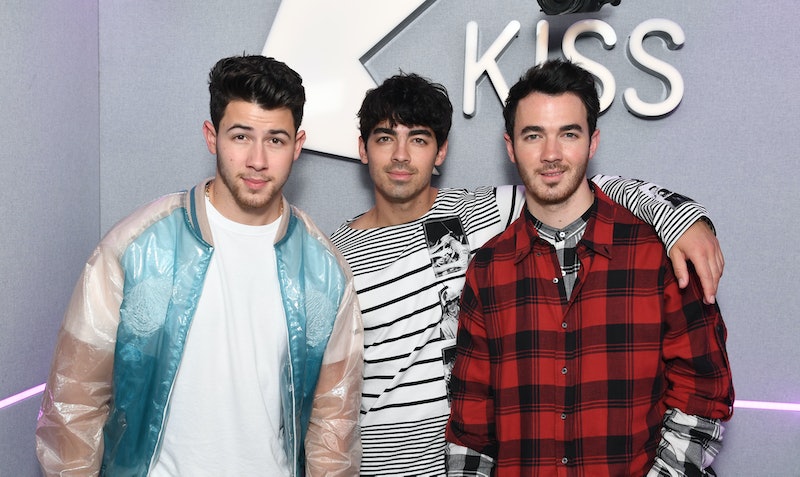 You thought The Great Jonas Brother Breakup of 2013 was tough on you? Well, Nick Jonas worried the other two Jonas Brothers wouldn’t talk to him afterward. Like, ever. In an upcoming interview with CBS Sunday Morning that is slated to air on June 2, the Jonas Brothers talked about what it was like to pull the plug on a wildly successful musical act that also happens to be made up of three brothers. Per a CBS News press release, Nick said, "I feared that, you know, they would never speak to me again."

This fear is something that also came up in the trailer for the JoBros' forthcoming documentary, Chasing Happiness, which airs on Amazon Prime Video on June 4. "There were moments I thought they'd never speak to me again," Nick said in the preview. (Spoiler alert: They would speak to him again. And five years and some change later, they would get back together, release some music, go on tour, put out a documentary, and drop a memoir.)

“I think a lot of people lost the appetite for what we were putting into the world. So, you know, we were putting up shows that weren’t selling. We were making music that I don’t think we were all super proud of, and it wasn’t connected. So I had a very tough conversation with them where I laid it out for them. I said, ‘You know, I feel like the Jonas Brothers should be no more, and we should go on individual journeys.’ And it didn’t go so well.”

Middle JoBro Joe Jonas also was less than optimistic. “I checked out in my mind that – that was it," he said. "There’s going to be no more brothers ever.” (Spoiler alert: There would be more brothers ever. The Jonas Brothers' breakup ended up being nothing more than a hiatus that lasted five years and some change.)

You can watch a preview of the interview below.

On the flip side, Nick also happens to be the one who got the ball rolling for the reunion idea. In a new interview with Wonderland magazine, the youngest member of the JoBros shared, "I hate that I have to take credit for being the one who initiated the conversation about breaking the band up, but the redemption story is that I also got the band back together in a way!” He continued,

“I was starting to crave that magic and being on stage with them again, so I started the conversation. Initially I think it was met with a little apprehension, but then over time, once we decided all together to start working on this documentary, I think we were able to get into it and talk through some of the things that we wouldn’t really talk through before.”

And thank goodness. We're all suckers for re-you-nion.

More like this
Shakira Joked About An Early 2000s Video Of Her First Camera Phone Encounter
By Stephanie Topacio Long
17 Years Ago, 'Hannah Montana' Reportedly Almost Cast This 'Gossip Girl' Star
By Grace Wehniainen
Netflix Reveals First Look At Wednesday In The 'Addams Family' Spinoff Series
By Bustle Editors
Josh Peck Shows Love To Jennette McCurdy After Her Shocking 'iCarly' Revelations
By Radhika Menon
Get Even More From Bustle — Sign Up For The Newsletter